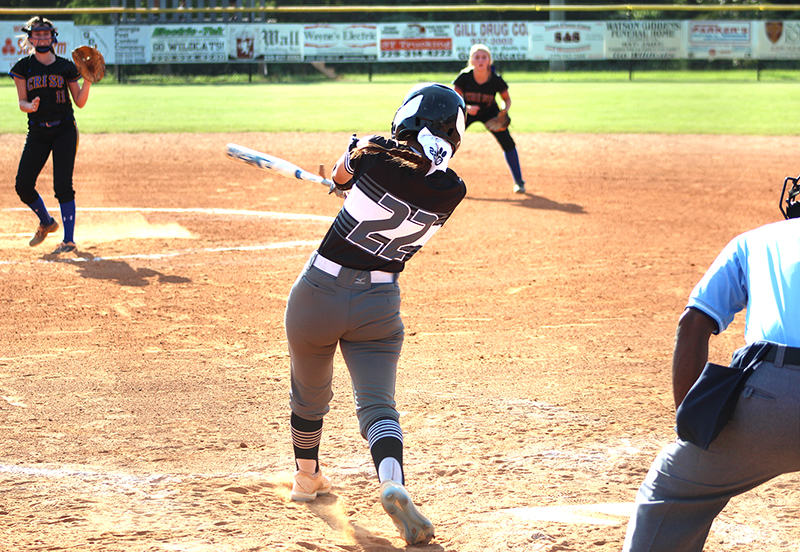 Schley County pitcher Saige Whaley seen here connecting for her only hit of the game against Crisp County. Whaley went 1-for-4 with an RBI. Photo by Sheila DeVane

ELLAVILLE – After seeing their 10-game winning streak come to and end in a 7-2 loss to Crawford County on Tuesday, September 3, the Schley County Wildcat softball team (SC) rebounded like champions the day after by scoring two runs in the bottom of the seventh inning to come from behind and defeat Crisp County (CC) 8-7.

The game was played on Wednesday, September 4, at Schley County High School. 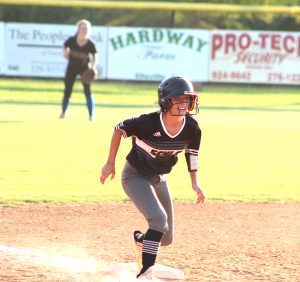 Saige Whaley led off the bottom of the seventh with a double to left field. Whaley tried to steal third base, but was thrown out. Landry Whaley then flew out to left field and Wildcats were down to their last out, trailing 7-6.

However, this is when SC began their march to a come-from-behind victory. Berkley Goodin was able to draw a walk off of CC starting pitcher Rilee Duckworth. Zoe Molina then singled to put runners on first and second with two outs. Maddie Walker was brought in to pinch run for Molina.

Hannah Crawford came through in the clutch with an infield RBI single, scoring Goodin to tie the game at 7-7. However, an error was committed by CC shortstop Kirin Webb. This allowed Walker to score the winning run all the way from second base to give the Wildcats a dramatic come-from-behind victory. 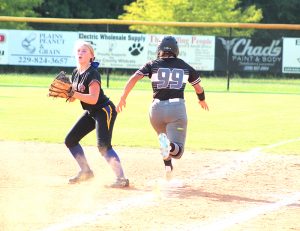 Alexis Bradshaw led the Wildcats’ offensive attack by going 2-for-3 at the plate with a triple, a single and two runs scored. Both Crawford and Tamia Kelley went 2-for-4 and each drove in an RBI.

Saige Whaley started in the circle for the Wildcats. Whaley gave up seven runs on 14 hits, but only three of those runs were earned. She struck out one batter and walked three.

Rilee Duckworth took the loss for the Cougars. Duckworth gave up eight runs on 11 hits and six of those runs were earned. She walked two batters and struck out none.

With the win, the Wildcats improve to 11-2 on the season, while the Cougars drop to 6-3.