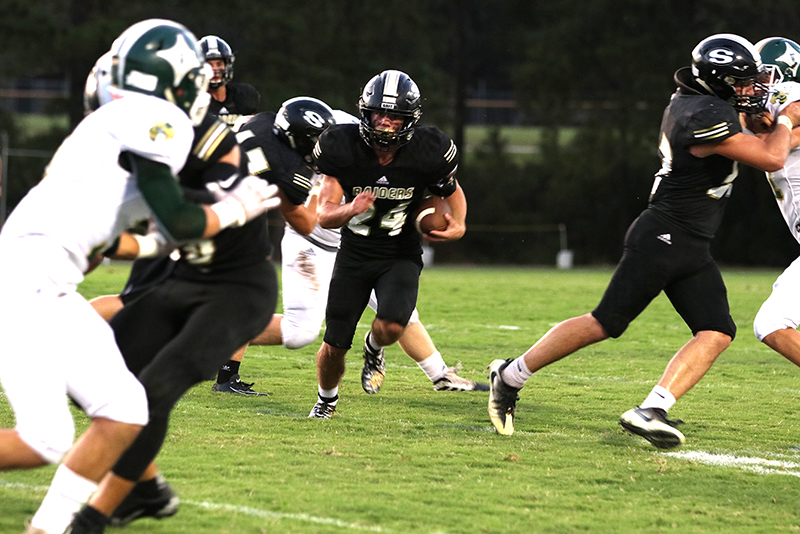 Southland Academy running back Clay Owens broke the school’s all-time rushing record and the record for all-purpose yards when he scored six rushing touchdowns in a 47-14 rout over Westfield. Those previous records were set by Dave Walls back in 1992. Photo by Sherri Bass

Incidentally, Walls was in the stadium to witness Owens’ record-breaking performance.

Much of Owens’ work against the Hornets can be credited to the Raider defense, which forced the Hornets into committing four turnovers on the night. 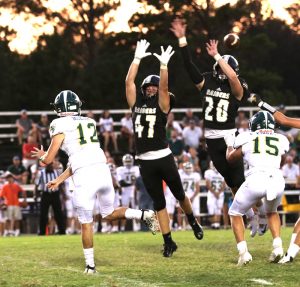 Southland won the toss, but elected to defer until the second half. The Hornets were able to move the ball down to the SA 47-yard line. Then Hunter Smallwood ran the ball 44 yards down to the SA four-yard line. A few plays later, Michael Fitzpatrick ran it in for a touchdown and kicked the extra point to give the Hornets a 7-0 lead with 8:28 left in the first quarter.

On the Raiders’ first possession, they were able to move the ball down into WS territory, thanks to a steady running game by Owens and quarterback Landon Law. On first and 10 from the WS 26-yard line, Law completed a pass to Luke Henson inside the WS 15. However, the Raiders were not able to score a touchdown and had to settle for a field goal by Caleb Law, making the score 7-3 in favor of the Hornets. 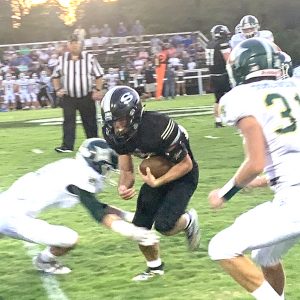 Southland Academy running back Clay Owens fights for yardage against Westfield. Owens scored a 40-yard rushing touchdown in the first half.
Photo by Ken Gustafson

On the Hornets’ next possession, the Raider defense forced the first of four turnovers committed by WS on the night when the Raiders recovered a fumble.

This gave the SA offense the opportunity they needed. On second down and 10 from the WS 40-yard line, Owens scampered 40 yards for the first of his six rushing touchdowns The extra point attempt by Caleb Law was good, and the Raiders enjoyed a 10-7 lead at that point.

With under a minute to play in the first half, The Raiders struck again for a big play. They had the ball just inside the Hornets’ territory when Law rolled to his right to throw a pass. Seeing that no receiver was open, he cut back across the field and ran the ball all the way down inside the WS five-yard line. However, the Raiders were not able to punch it in the end zone. On fourth down, they had to settle once again for a field goal by Caleb Law. Both teams went into halftime with SA leading 13-7. 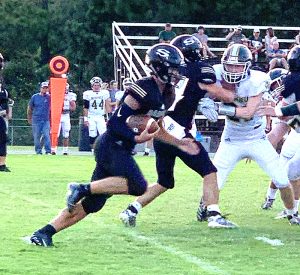 The Raiders got the ball to start the second half and wasted no tine in adding to their lead. They used the running ability of Landon Law and Owens to move the ball into the Hornets’ territory once again. On one play, Owens ran the ball all the way down inside the WS 20-yard line. A few plays later, Owens scored his second rushing touchdown of the night. The extra point by Caleb Law was good, and the Raiders enjoyed a 20-7 lead early in the third quarter.

On the Hornets’ next possession, the Raider defense forced a fumble, and the ball was recovered by Riley Parker. The SA offense was back in business once again. Owens scored another rushing touchdown, but the score was nullified due to a block-in-the-back penalty. The Raiders were forced to try a 36-yard field goal on fourth down, but Caleb Law’s attempt was no good. 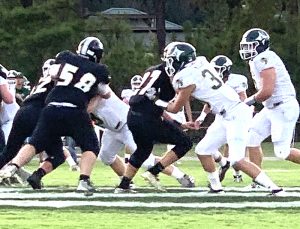 Luke Henson (27) and Collins Bass (58) blocking for the Raiders on offense.
Photo by Ken Gustafson

However, the Raider defense came up big once again. They forced another fumble by the Hornets, and the ball was recovered by Hunter McCain of SA. Running back James Griffin ran the ball down to the Hornets’ one-yard line. A couple of plays later, Owens scored his third touchdown of the night. The Raiders decided to go for two, but the two-point conversion attempt failed. Nevertheless, SA had increased their lead to 26-7 with 4:46 to go in the third quarter.

However, the Raider defense wasn’t finished. They forced yet another turnover when WS quarterback Beck Beckham’s pass was intercepted by SA defensive back Nathan Duke. The Raider offense once again cashed in on the turnover by moving the ball down inside the Hornets’ 20-yard line. A few plays later, Owens scored his fourth rushing touchdown. Caleb Law’s extra point was good, and the Raiders were up 33-7 near the end of the third quarter.

The Hornets responded with a touchdown of their own in the fourth quarter. On third and 15 from the SA 22-yard line, Smallwood ran 22 yards for a touchdown. The extra point was good, and WS had cut the Raiders’ lead to 33-14 with 7:16 left in the game. 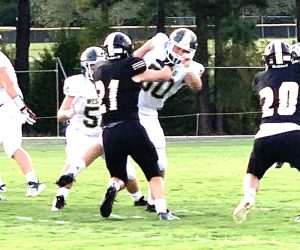 However, Owens was not done. On the Raiders’ next possession, he scored another rushing touchdown from 37 yards out. The extra point by Caleb Law was good, and the Raiders extended their lead to 40-14. Owens later capped off his magical night by scoring his sixth touchdown of the game to complete the 47-14 rout of the Hornets.

The Raiders (1-0) will try to keep their w9inning ways going when they travel to the Atlanta suburb of Loganville, GA next Friday, September 13, to take on the Lions of Loganville Christian Academy. Kickoff is scheduled for 7:30 p.m.

Wildcats fall to Westfield in 10-0 shutout