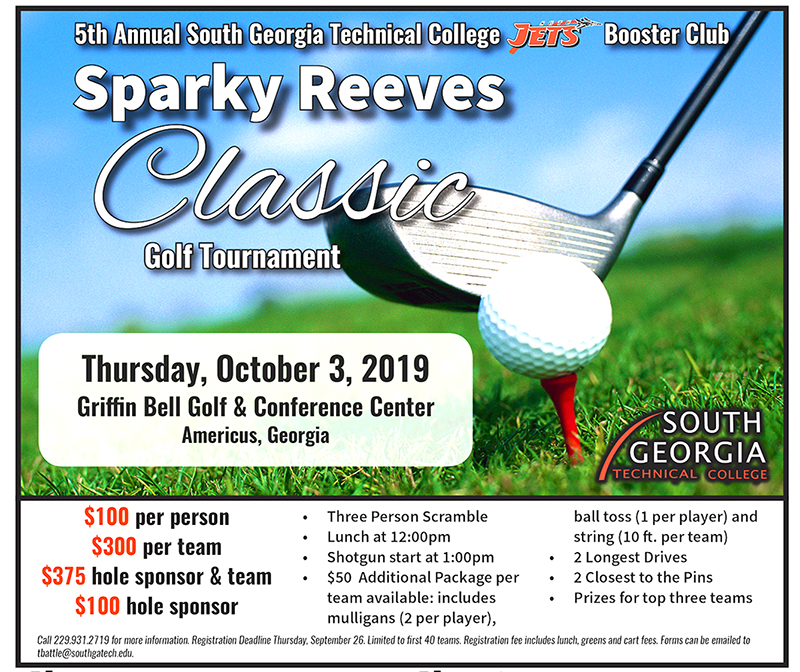 Everyone is encouraged to participate and all proceeds will go to the SGTC Jets Booster Club to support the SGTC men’s and women’s basketball programs.

The deadline to enter is Thursday, September 26.

“We have had a great turnout for the past four years and we are looking forward to another great tournament this year,” SGTC Athletic Director and women’s head basketball coach James Frey said. “We have a lot of fun and this is a great way to raise funds for our student athletes and the Jets Booster Club. If you love to play golf, we hope you will join us on Thursday, October 3.”

The first tournament was held in 2015 and was planned to honor retiring SGTC President Sparky Reeves. He was a driving force behind the success of the nationally recognized men and women’s basketball programs at SGTC during his 11-year tenure as the school’s president. The tournament was named in his honor and to recognize his leadership and support of athletics at SGTC.

The tournament is a three-person scramble. The cost is $100 per person and $300 per team. There are also $100-hole sponsorship opportunities. If individuals would like to place a team in the tournament and be a hole sponsor, the cost is $375.00.

Teams will be treated to lunch at 12 p.m. and there will be a shotgun start at 1 p.m.

Teams can also purchase an additional package for $50, which includes mulligans (two per player), ball toss (one per player), and string (10 feet per team). Prizes will be awarded to the top three teams, the two longest drives and two “closest to the pin” prizes.

The deadline to register for the tournament is Thursday, September 26 and entry is limited to 40 teams. Registration fees include lunch, greens and car fees. For more information, contact SGTC Athletic Director James Frey at jfrey@southgatech.edu or Terri Battle at tbattle@southgatech.edu. Those who would like to register can also register by phone at 229-931-2719. Checks should be made payable to the SGTC Booster Club and mailed to Terri Battle, 900 South Georgia Tech Parkway, Americus, GA 31709.