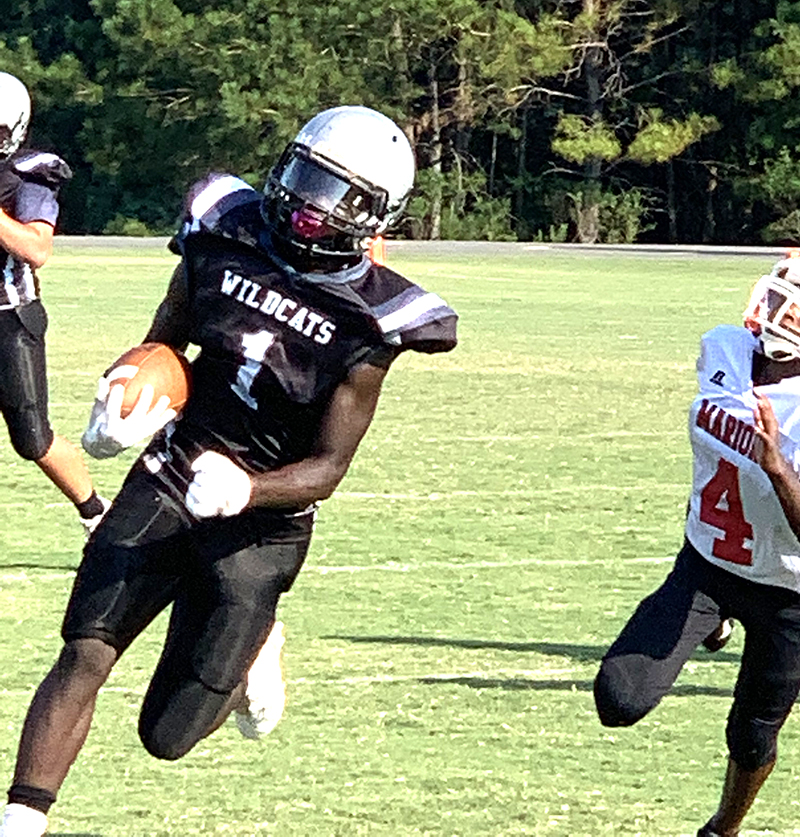 Schley County running back Jalewis Solomon scores one of his touchdowns in the Wildcats’ 66-6 win over Marion County. Photo by Ken Gustafson

Ellaville – The Schley County Middle School football team (SCMS) totally dominated Marion County from start to finish as they were able to score touchdowns on almost every offensive possession en route to a 66-6 rout of the Eagles on Wednesday, September 11, at Schley County High School.

With the win, the Wildcats improve to 4-0 on the season and have outscored their opponents 108-6 in their last two games.

“It’s just a great team effort on both sides of the ball…on the offensive side and the defensive side,” SC head coach Ernest Scott said. “We get after it defensively. We’ve got so much speed and that helps. We’ve just got to keep grinding and then, hopefully, we can finish it off.” 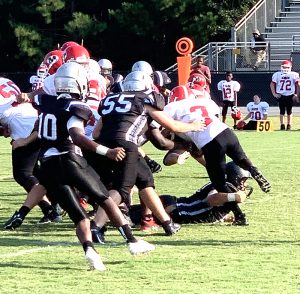 Schley County defensive linemen Champ Marshall (55) and Trenton Stubbs (42) get in on the tackle of the MC running back. Kabreon Aldridge (10) is also in on the tackle.
Photo by Ken Gustafson

The Wildcats opened the scoring when running back Zayden Walker ran the ball 45 yards for a touchdown. Jalewis Solomon scored on the two-point conversion attempt, giving the Wildcats an 8-0 lead.

The Wildcats added to their lead a few minutes later when quarterback Jay Kanazawa threw a short pass to Solomon, who scampered 85 yards for his first touchdown of the game. The two-point conversion attempt was no good, but the Wildcats enjoyed a 14-0 lead.

On the Eagles’ next possession, the SC defense forced a fumble. The ball was recovered by SC’s Jeremyah Rogers at the MC 30-yard line. A few plays later, Walker scored his second touchdown of the game from three yards out. Jack Clark scored the two-point conversion to increase the SC lead to 22-0 with 3:01 left in the first quarter. 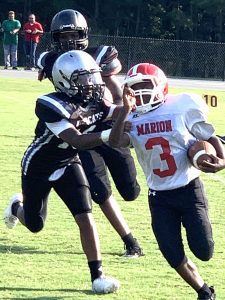 Schley County defensive back Kabreon Aldridge chases down the MC running back.
Photo by Ken Gustafson

Solomon scored another touchdown and walker scored two more to help give the Wildcats a 46-0 lead at halftime.

The Wildcats didn’t let up their intensity in the second half. The SC defense forced another fumble by the Eagles and ball was recovered by Kabreon Aldridge of SC. Aldridge fumbled immediately afterward, but his teammate, Trenton Stubbs, recovered the ball and scored another Wildcat touchdown. The two-point attempt was no good, but the Wildcats had increased their lead to 52-0.

SC increased their lead when Rogers scored a touchdown. The Wildcats went for two and failed, but they extended their lead to 58-0 with under two minutes left in the third quarter.

On the Eagles’ next possession, the SC defense rose up again when Kolbey Short sacked the MC quarterback to end the third quarter. 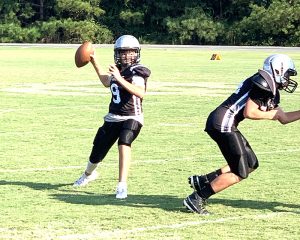 SCMS quarterback Jay Kanazawa is back to pass.
Photo by Ken Gustafson

The Wildcats kept up their scoring when running back Kabreon Aldridge ran 55 yards for another SC touchdown. This time, the two-point conversion was scored by Javoris Scott to give the Wildcats a 66-0 lead with 2:51 left in the game.

The Eagles finally got on the board when Jayden Richardson ran the ball 76 yards for a touchdown. However, the Eagles fumbled the ball on the two-point conversion attempt and the ball was recovered by the Wildcats’ Jalen Hill. 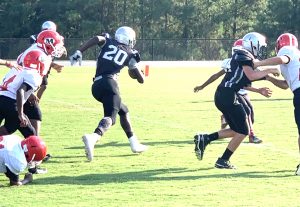 SCMS running back Zyden Walker scores one of his touchdowns against Marion County.
Photo by Ken Gustafson

“It’s just kids doing their assignments. They’re young. They’re out here having fun,” Scott said. “We started in July so they’ve been after it ever since. It’s just a testament to their hard work.”

SCMS will try to continue their winning ways when they host Stewart County next Wednesday, September 18. Kickoff is scheduled for 5 p.m.