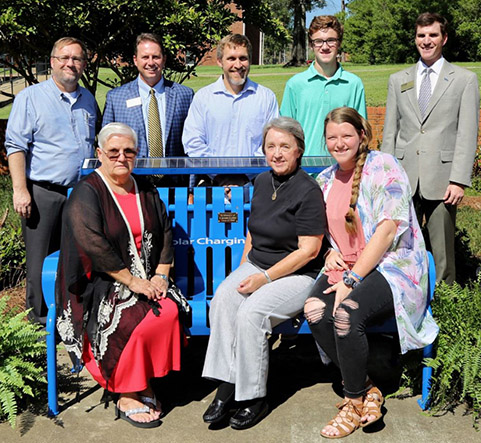 AMERICUS — In memory of her late husband, Linda Grimsley (’68 & ’83) of Sylvester recently gifted a solar bench to Georgia Southwestern State University (GSW), the place she credits with bringing the two together.

A dedication ceremony of the bench honoring Alan Grimsley (’68), who died earlier this year, was held recently with family and GSW faculty, staff, and students in attendance. The bench, which is powered by the sun and doubles as a charging station for devices, was placed outside of the James Earl Carter Library. Grimsley stated she first met her husband in the old library, so it was only fitting the bench be placed outside the new one.

One of their sons, Alan, spoke at the ceremony. “Americus and Georgia Southwestern is something I’ve heard about since I was a little kid, and it’s a really special place to our family. I think Daddy would be really proud of this since it is practical — it’s not just a bench but it does something else. He was a big multi-tasker.”

By Beth Alston   AMERICUS — Over 500 enjoyed the annual Arts in Rees Park event, sponsored by the Americus-Sumter... read more