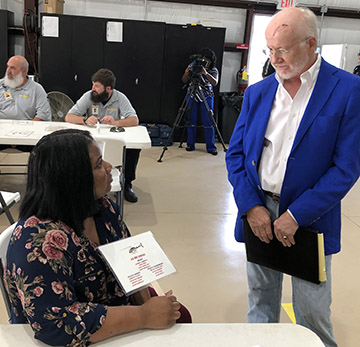 Dr. Kenneth Wurtz, who survived life-threatening injuries in an accident on Aug. 6, talks with Tynesia Mitchell, the Middle Flint E-911 Center dispatcher who took his call, and using technology, pinged his cell phone, leading first responders to his remote location.

Physician thanks first responders who saved his life

AMERICUS —When Dr. Kenneth Wurtz, an oncologist, decided to semi-retire and move back to the area four months ago, little did he know what he would be facing. He purchased a house and land on Ga. Highway 27 East and started doing work on the structure and property.

On Tuesday, Aug. 6, during the long daylight hours of summer, around 8 p.m., Wurtz, 67, was using his tractor and bush hog in a wooded area behind his house when a tree fell, pinning him to the seat of the bush hog.

Wurtz told the Times-Recorder that he was able to get his hand into the side pocket of his cargo pants, and called 911. He said he only remembered mumbling and then lost consciousness. The dispatcher, Tynesia Mitchell, used Wurtz’s cell phone pings to locate where he was lay injured and helpless. She told the Times-Recorder that he was in and out of communication during the 20-minute phone call but was aware that he had seen blue lights go by and told her they had missed his location. He said he had passed out and didn’t regain consciousness until he was being loaded into the helicopter for transport to Navicent trauma center in Macon. But others would recall their conversations with him.

Wurtz, in welcoming everyone Thursday, shared some heartfelt words when he gave thanks for their life-saving efforts. He introduced himself as their “victim and their survivor.” He introduced his pastor, Rickey Rushing of Hopewell United Methodist Church, Ellaville, who Wurtz said had been by his side throughout his recovery, calling Rushing a “first responder” also. Rushing thanked all the first responders for their service, and blessed the food.

Wurtz gave remarks prior to lunch being served. He said he really didn’t fully know what happened the day of the accident, except that the tree fell on the tractor, pinning him. He sustained a severe skull fracture, subdural hematoma, crush injury and fracture to his left elbow, seven left rib fractures, and three right rib fractures.

“The good thing about it, when I got to the trauma center, a lot of the physicians I had trained with, so I knew the neurosurgeon. I knew the head of the orthopedic department as well,” he said. He thanked everyone from the dispatcher and all the first responders as well as the trauma center for literally saving his life.

“I don’t recall anything about the EMS,” he said. “The first thing I remember is being placed into the helicopter and lying flat on my back, looking around, and this face comes over me. … and he says, ‘hello, I’m Adam.’ And I’m ascending. I didn’t know if I was going to Heaven or where I was going, but I was thinking, ‘which Adam?’ … I don’t remember the ride to Macon at all.”

Wurtz said that during his call to 911 that day he felt that God was on the other end. He doesn’t recall saying anything on the call or hearing the dispatcher.

He asked several first responders what they recalled about the day of his accident.

Tynesia Mitchell, the E-911 dispatcher who lead first responders to Wurtz’s location, said he spoke clearly during the call and stayed on the phone the entire time until help arrived. She could tell he was in pain, she said. Mitchell has been a dispatcher since January.

“You don’t know how much I appreciate you hanging on and not thinking that was a prank phone call,” Wurtz told her. 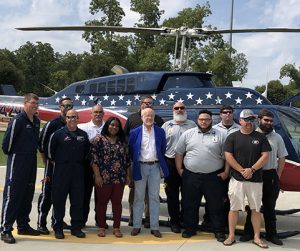 Sumter County Fire & Rescue was the first agency to reach Wurtz. When the first man arrived, he saw the tractor still running, its wheels digging deeper into the earth. He then relayed the location to others. They removed the tree from Wurtz only after EMS arrived.

One of the Gold Star EMTs told about his experience that day. He and his partner found Wurtz hanging off the back of the tractor. The EMT said Wurtz told him he was going into shock, and that he was a doctor. Wurtz told the EMT he couldn’t breathe and the EMT explained to him that a tree was on him and they couldn’t move it yet. He said Wurtz was talking and lucid the entire time, interacting with them. He said once Wurtz was removed from the tractor, he told the EMTs he was glad he could breathe again and asked if it was “bad.” They told him yes, it was “pretty bad.” The EMT said Wurtz didn’t want to go to the hospital but the EMT took a photo of his skull injury and showed it to him, convincing him.

Kenneth, the helicopter pilot that day, said Wurtz was adamant about calling his son and girlfriend.

Adam, the flight nurse with AirEvac that day, said he tried to keep the patient awake and talking on the flight to Macon.

Jennifer English, director of the Middle Flint E-911 Center, told Wurtz they have the recordings of his phone call that day if he wanted to listen. “I’m not sure, yet,” Wurtz said. He said he passes the accident scene every day and “that’s been hard. But I’ll get back in the saddle and do it.”

Wurtz showed an Army cap with hole in it, the cap he was wearing the day of is accident. “I’m Air Force,” he said, “but that day I was wearing Army, Army strong.”

Wurtz is paying $50 for the first 10 people to sign up for AirEvac insurance. He said that next year, he wants to host another luncheon for first responders on Sept. 12.

Wurtz, a native of Ellaville, is licensed to practice in seven states, and has been associated with six universities. He told the Times-Recorder than he plans to remain in Americus.

By Beth Alston   AMERICUS — A group of concerned citizens attended Monday’s work session of the Sumter County Board... read more