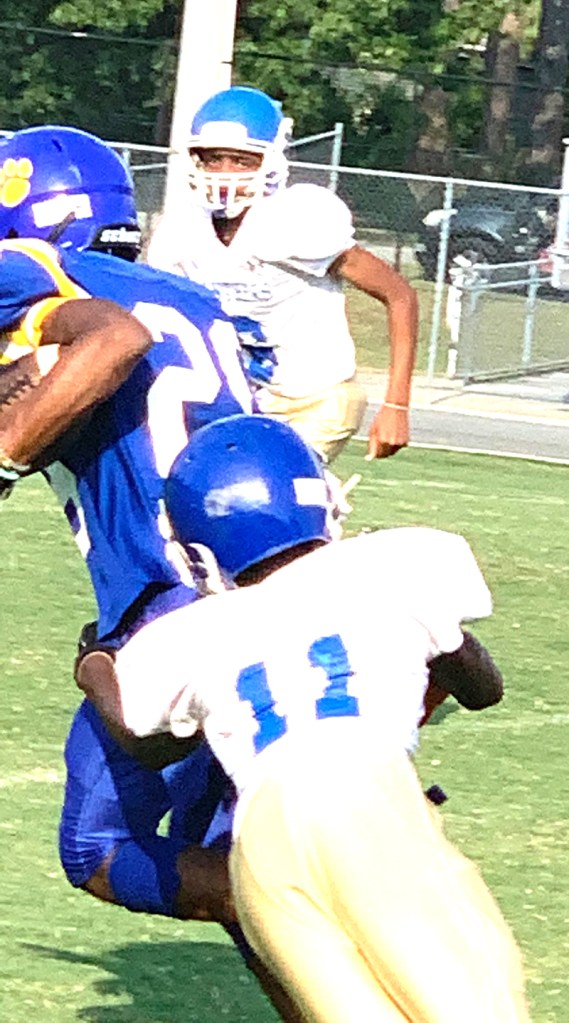 SCMS defensive back JaQuavion Moses (11) tries to make a tackle on CCMS running back C.J. Jones in the Panthers’ 32-20 loss to the Cougars. On offense, Moses made a great reception in the second half of that game. Photo by Ken Gustafson

CORDELE – The Sumter County Middle School football team (SCMS) crossed the Flint River into Cordele on Wednesday, September 18, hoping to defeat the Cougars of Crisp County Middle School (CCMS) in the middle school football version of the “Battle of the Flint”. Unfortunately for the Panthers, CCMS running back C.J. Jones and his mates had other ideas. Jones scored three touchdowns in the first half to lead the Cougars to a 32-20 win over the Panthers at the Crisp County High School football stadium.

The Cougars were able to move the ball all the way down to the SCMS one-yard line. At that point, Jones went ahead and ran it in for the Cougars’ first touchdown of the game. Jayden Clark scored the two-point conversion to increase the CCMS lead to 8-0. 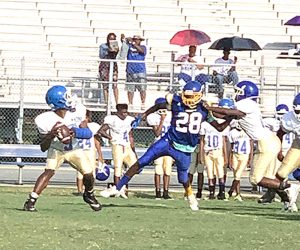 SCMS quarterback Anthony Tyson is back to throw.
Photo by Ken Gustafson

The Panthers tried to get their offense going, but struggled to move the ball against the defense of the Cougars. CCMS got the ball back and picked up where they left off. Jones scampered 60 yards for another CCMS touchdown. The two-point conversion was scored by Keivon Merell to increase the Cougars’ lead to 16-0.

The Panthers tried to move the ball on offense, but continued to struggle against the CCMS defense and had to punt the ball back to the Cougars. CCMS added to their lead when Jones returned the punt 65 yards for his third touchdown of the day. The two-point conversion attempt failed, but the Panthers still trailed 26-0 at halftime. 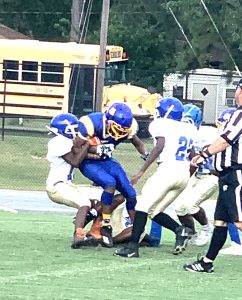 While the SCMS offense struggled during the first half, the defense was able to make a play. SCMS defensive back Jaquavious Goober was able to come up with an interception to halt another drive by the Cougars.

The Panthers were finally able to get on the board with a little over five minutes left in the third quarter when quarterback Anthony Tyson ran the ball 45 yards for a touchdown. The two-point conversion attempt failed, but the Panthers were on the scoreboard, trailing 26-6.

However, the Cougars were on the move once again. They marched the ball down to the SCMS 30-yard line. A couple of plays later, Clark scored a rushing touchdown from 10-yards out. The two-point conversion attempt failed, but CCMS had increased their lead to 32-6 with three minutes left in the third quarter. 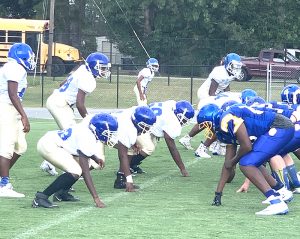 The SCMS defensive line is poised and ready to try to make a stop against the CCMS offense.
Photo by Ken Gustafson

The Panther offense responded in a positive way. They were able to move the football down to the CCMS 38-yard line. However, the Panthers fumbled the football and it was recovered by the Cougars at their own 41-yard line.

However, the Panther defense was able to make a stop on downs and got the ball back for the offense. On first and 10 from the CCMS 45-yard line, running back Jakory Wise ran the ball all the way for a SCMS touchdown. Tyson converted the two-point conversion and the Panthers trailed 32-14 with a little less than six minutes left in the contest. 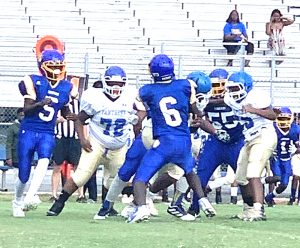 A couple of plays later, Tyson scored his second touchdown of the day. The two-point conversion attempt failed, but the Panthers were within 12, trailing 32-20. 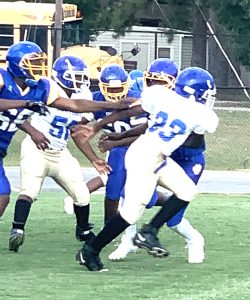 SCMS defensive back Ken Walters tries to fight off a block and make a tackle.
Photo by Ken Gustafson

Unfortunately, time ran out on the Panthers and the Cougars ended up winning the contest 32-20.

The Panthers will be off next week and will try to get back into the win column when they host Lee County East on Wednesday, October 2, at Alton Shell Stadium. Kickoff is scheduled for 5 p.m.