Americus-Sumter defense comes up big in victory over Shaw 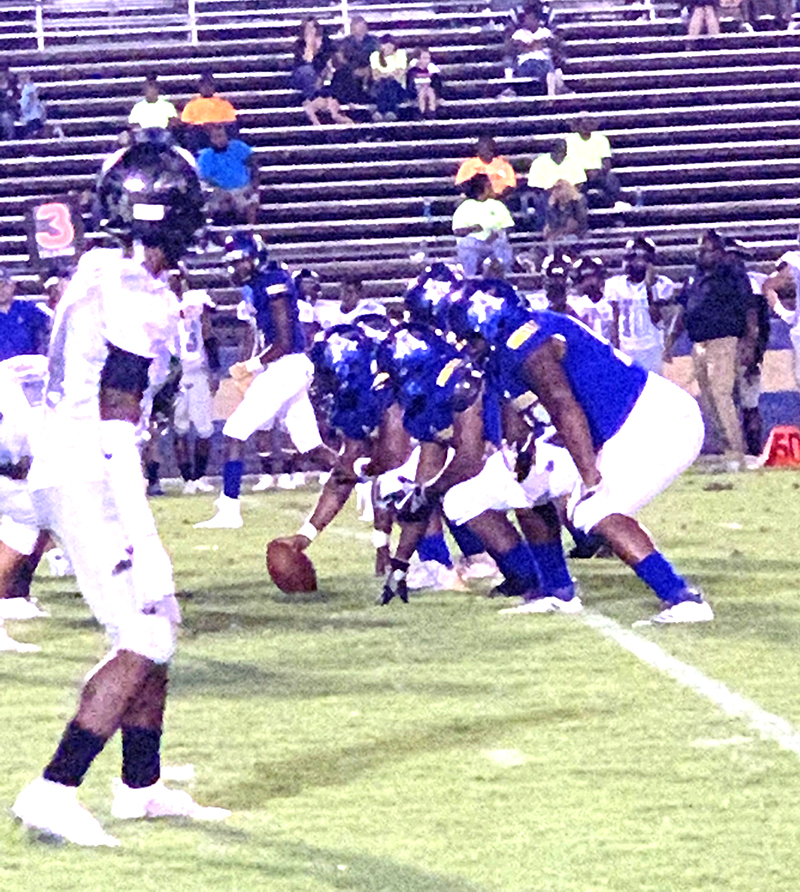 The Americus-Sumter offensive line is lined up to run a play against Shaw. Photo by Ken Gustafson

It was Sumter County Parks and Recreation Night and all of the youth football teams and cheerleading squads were honored before the game. The Panthers were ready to show these youngsters what it’s like to play winning football. While the offense struggled for much of the night, the Panther defense played extremely well the entire evening and helped ASHS earn a 13-6 victory over the Raiders.

The Panther defense was able to stop the Raiders on their first offensive possession, forcing them to punt. However, on the Panthers’ first offensive possession, running back Christian Waymon fumbled the ball and it was picked up by Jakori Arnold-Brooks of the Raiders. Arnold-Brooks ran the ball back the other way for an SHS touchdown. The Raiders tried to go for two, but ASHS defensive back Trevian Thomas intercepted SHS quarterback Watson Davis’s pass to nullify the attempt. Nevertheless, the Raiders had taken a 6-0 lead. 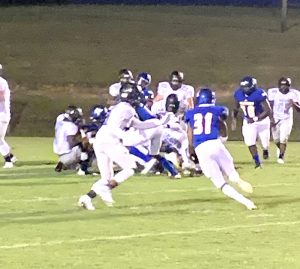 Americus-Sumter defensive back Breylon Green (31) looking to make a play on defense.
Photo by Ken Gustafson

Later on in the first quarter, the Panthers were able to move the ball down to the SHS five-yard line. This was in part due to the Panthers’ running attack and a pass interference penalty against the Raiders. However, on third and goal from the five, the ball was snapped over ASHS quarterback Kanova Willoughby’s head and he had to recover it back at the 20-yard line. It was a 15-yard loss that forced ASHS to have to attempt a 37-yard field goal on fourth down. Fortunately, Alexis Vasquez was able to kick the ball through the uprights to cut the Raiders’ lead to 6-3. There was another bad snap earlier in the half that nullified another drive for the Panthers as well.

It was a defensive struggle the rest of the way between both teams during the first half. There were numerous penalties that were committed by both teams that nullified offensive drives. As a result, both teams went into halftime with SHS leading 6-3. 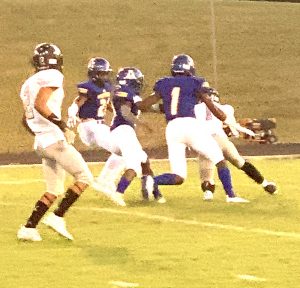 ASHS defensive back Trevian Thomas tries to chase down the Shaw quarterback.
Photo by Ken Gustafson

The Panthers got the ball to start the second half. On third and 16 from the ASHS 37-yard line, Willoughby was able to find Kylen Carter for a 36-yard reception down at the SHS 27-yard line. Then on third and six from the SHS 27, Willoughby threw a 27-yard touchdown pass to his brother, Quevoluia Willoughby, who was all alone in the end zone. The extra point by Vasquez was good and the Panthers had a 10-6 lead.

The Raiders were able to move the ball down inside ASHS territory on their next possession. However, the Panther defense was able to stop the Raiders on four downs to get the ball back.

Later on in the game, it looked as if the Panthers had scored another touchdown when Willoughby threw a short touchdown pass to Terquavian Harper, but it was nullified because Willoughby was ruled to have been across the line of scrimmage when he threw the ball. ASHS had to settle for a 33-yard field goal by Vasquez to increase the lead to 13-6. 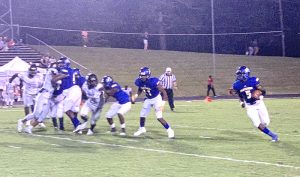 The defenses of both teams were able to force turnovers later on in the game, but the Panthers were able to hold on to get the win. ASHS is now 2-2 on the season and 2-0 in Region 1-AAAA play. They will now turn their attention to the Homecoming game next Friday night, September 27, against Hardaway. Kickoff is scheduled for 7:30 p.m.