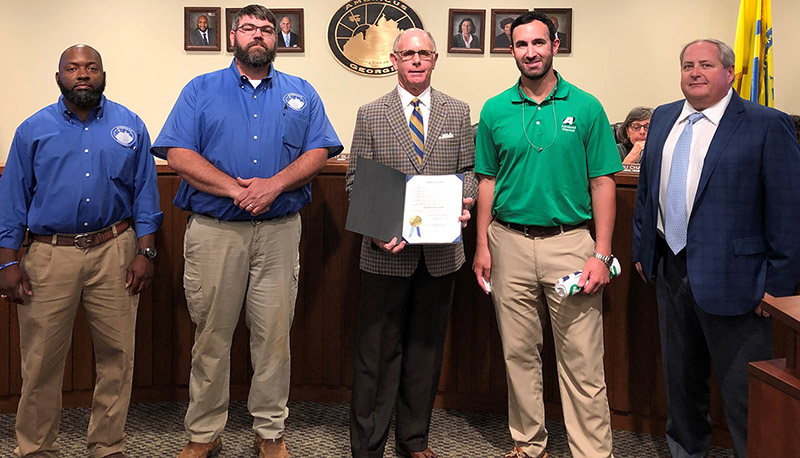 AMERICUS — The Americus city council held its third and final public hearing at Thursday’s regular monthly meeting. No one spoke for or against the tax hike from 11.32 mills to 13.12, In the city’s central business district, the rate will go to 14.62 mills.

Following the public hearing, Council member Daryl Dowdell said that while he’s not against raising the millage rate, he “dislikes putting more taxes on property owners.” He again asked “why”? Mayor Barry Blount said this goes back to August 2018 when they approved the recommendations of the salary study which necessitated a $1 million increase in the budget. “We’ve already raised the water rate,” Dowdell said, and “now property taxes.”

On the consent agenda, the council approved the following.

On the agenda Thursday were the following items.

During the revenue bond discussion, the mayo reminded council members of the work needed on the well as other projects for the water, sewer, and stormwater departments. Several months ago, this same subject had come before the council and was defeated in a split vote. On Thursday, Blount reiterated the terms of a 20-year revenue bond at an interest rate of 2,86 percent with the total cost coming to $20,299,047. This bond issuance will pay off existing revenue bonds and leave the city with about $13 million for other projects. After much discussion, Lou Chase moved to approve and was seconded by Charles Christmas. Chase, Christmas, Kelvin Pless, Nelson Brown, and Daryl Dowdell voted yes. Juanita voted no.

Local citizen Clifford Morgan addressed the mayor and council about changing the policies for citizens speaking during council meetings. Morgan wants citizens to be able “to speak freely during meetings to give input.” The mayor reminded Morgan that he can sign up to speak on an agenda item but Morgan wanted to know what he is required to do so. “You sign up and we recognize you,” the mayor said. “That defeats the purpose,” Morgan said, adding that the floor should be open for citizen comment all the time about things that are not on the agenda. “They expect to come here and give input,” he said of citizens.

Morgan went to ask the mayor and council to consider changing the policy. “Citizens feel like you’re distancing yourselves from us. You have rules and regulations but you have to be a little bit lenient.”

Council member Nelson Brown said he will bring the matter back up next month, to consider not requiring three council members to approve a speaker.