Anna Moates talks about freshman year, and plans for sophomore 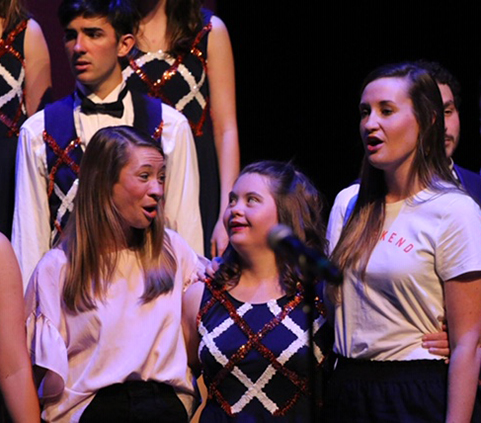 All three of the Moates sisters on stage for the traditional ‘What Would I Do Without My Music’ performed with the Auburn Singers.

AMERICUS — When Anna Moates was a teenager, she dreamed of things that most young girls do: college, boyfriends, music, clothes. Her record of achievement in Sumter County 4-H is admirable to say the least, with public speaking at the top of the list.

Anna, 23, has just begun her second year at Auburn University (AU). She is the first Auburn student with Down syndrome, and is part of the university’s EAGLES, program launched by the College of Education in 2018. It is specifically designed to give students with intellectual disabilities, such as Down syndrome, a chance to experience college. Because of the EAGLES program (Education to Accomplish Growth in Life Experiences for Success), students are better prepared for a life on their own. They can attend college, maintain jobs, are taught time management and how to live away from home, and how to one day live a life on our own.

When Anna’s older sister, Ashley, was Miss Auburn University, her platform was to provide those with disabilities the same Auburn experience to follow their dreams. Ashley’s inspiration was her sister. This was the beginning of the EAGLES program. Anna Moates was the first and only female member of the EAGLES her freshman year. Her suitemate this year, Elizabeth, from Richmond, Va., is the second. Also living in the suite is a peer mentor for the EAGLES program. With Elizabeth entering as a freshman, Anna will also mentor her in the program.

While still that giggly girl down deep, Anna, who grew up in Lee County, has refined her dreams and is seeing many of them come to fruition.

Home-schooled since the fifth grade, Anna discovered the 4-H Club around age 10 through her love of horses and public speaking. 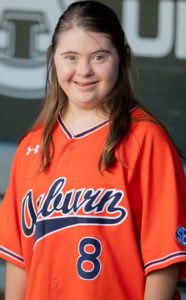 Diamond Dolls are the hostesses for the AU baseball team. They greet people entering the games and sell calendars to benefit the Miracle League. They also sing ‘Take Me Out to the Ballgame’ in the 7th Inning and throw out t-shirts to the crowd.

One of her biggest dreams was to be an Auburn Singer, being that both her older sisters, Ashley and Brittany, were members of the traditional group that’s been around for more than 50 years. Ashley arranged for Anna to perform with the Auburn Singers, for a small audience. Then, when Anna was accepted into the EAGLES program, the Auburn Singers welcomed Anna back to perform in their two big annual shows. Dale Farmer, formerly of the Americus High Singers, directs the Auburn Singers.

Anna’s schedule is dizzying even to veteran career women. She is a Diamond Doll for the Auburn University baseball team. She and the other Dolls sing ‘Take Me Out to the Ballgame’ during the seventh inning, cheer for the team, and throw t-shirts out to the crowd. Anna said tryouts were scored on personality and baseball knowledge. Plus, she already knew some of her brother Christopher’s friends on the team.

On Mondays, Anna is working at Storybook Farms in Auburn as a volunteer. The program is a therapeutic riding center using horses to teach people with special needs. Anna’s own horse, Starlight, is stabled at Auburn and she can visit him anytime. Her suitemate is also an equestrian.

Anna admits she was a little homesick away from her family the first semester at AU. “I had been homeschooled so it was different,” she said. But after she made some friends, both in the EAGLES program and outside, that diminished. Her mom said Anna didn’t call home much that first semester. Sister Ashley is a graduate student at Auburn, and is nearby.

“I was homesick,” Anna said, “but I was also desperate to fit in because I’ve made so many friends.” She said she got lost only twice during her freshman year.

Of boys, Anna is astute. “I have some really good friends, but I’m not looking for love,” she said.  With all her classes and other activities, that’s just as well.

Valerie Moates, Anna’s mother, said that Anna had so many activities last year that she became overwhelmed by the end of the year. Being that she has learned to better manage her time, Anna is still very much involved this year. She serves as an Ambassador for the AU College of Education after having gone through a rigorous interview process.

Anna is also involved in the Auburn Band through United Sound, a band that’s part of a national program in which band members are willing to teach those with disabilities how to play an instrument. “They work on a song,” Valerie said, “and then they actually perform that song with the Auburn Band, in concert.” Anna plays the baritone. When asked how she came to choose this particular instrument, she said, “Because it was the only one I could blow into.”

As if all her extra-curricular activities were not enough to fill her time, Anna Moates also talked about her coursework. There are her EAGLES classes that teach independent living, in addition to two Auburn classes. Last year, she took yoga and honors public speaking. She’s now taking a food science and nutrition class this semester, as well as a wellness class. Her EAGLES classes this year deal with budgeting, money management, and finance, and how to self-advocate.

Anna also has a job this fall, a paid, 10-hour-a-week job as an administrative assistant at the Jay and Susie Gouge Performing Art Center in Auburn, a newly opened business. Anna said multiple people perform at the facility simultaneously because there are multiple theaters and recital halls in it. She will get to see Broadway musicals up close. She will be ushering, greeting performers and helping to get their green rooms ready, keeping their appointments for them, among other tasks. The second semester, Anna’s job will be extended to 20 hours per week, something she is quite excited about. Also, coming up in the spring, Anna will be taking a music appreciation class.

As a sophomore, Anna’s curfew has been extended, from 10:30 p.m. during the week and 11 p.m. on weekends, to 11:30 p.m. weekdays and midnight on weekends. Anna is very happy about this. Her mother said this will help Anna during Auburn Singers show week rehearsals when she would be upset that she might miss her curfew, so extended curfews are very advantageous. The Auburn Singers spring show, “What Would I Do Without My Music,” is one of Anna’s favorites. Last year, she appeared on stage with both of her sisters for the first time together, a moment that really brings a smile to her face and that of her mother.

Anna also had a busy summer filled with interesting things. She again worked part-time for Regional Eye Center’s Lee County location, and took a four-hour hike, along with some rock climbing, in Steamboat Springs, Colorado, while on vacation with her family.

When asked about other highlights of her freshman year in college, Anna said she was interviewed by Columbus TV station WTVM on Sanford Lawn on the Auburn campus, about her being the first Auburn student with Down syndrome. Her sister Ashley was interviewed at the same time.

Valerie said, “The best thing — beyond all the classes, and just being in a dorm and having to get yourself ready and get to class on time … and figuring all that out — are the friendships. They’re true friendships going on, and it’s really a beautiful thing.” She said she was a bit worried about Anna on such a big campus, especially after having grown up in the country and being home schooled, but “she’s done well.” She said Anna enjoys being able to get together with friends when she wants to.