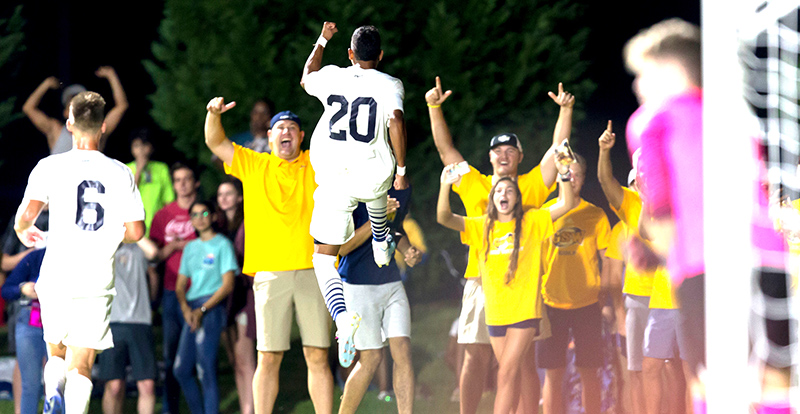 GSW junior forward Bryan Zuniga (20) and freshman center midfielder Cole Davison (6) are seen here celebrating with students after a goal in the Hurricanes’ win over Brewton-Parker to open the season. Zuniga scored one goal and tallied one assist in GSW’s 6-2 win over Talladega College. Photo by Arthur Thomspon

The six goals scored by the Hurricanes against the Tornadoes matched GSW’s second-highest output since the program joined the NCAA in 2006. The Hurricanes scored eight times last season in a win over Shaw University and posted a 6-1 victory over Florida College in 2008.

Moke opened the scoring in the 13th minute when he took a pass from Bryan Zuniga and cut past a defender to provide the space to give the Hurricanes an early 1-0 lead with his fourth goal of the season. The Tornadoes answered in the 31st minute when their leading scorer, Isamnia Cohen, found the back of the net.

From there on out, the Hurricanes were relentless in their attack and pounded the back of the net with five consecutive goals. Freshman forward Sebastian Da Silva kicked things off with his first collegiate goal in the 38th minute off a rebound from a shot by Sean Mckeevar. With less than two minutes remaining before halftime (43:15), Rafael Faria drilled a shot from long-range to give GSW a 3-1 halftime lead.

The Hurricanes picked up where they left off in the second half. With a little over three and a half minutes into the second half, Zuniga scored his third goal of the season. Kellan O’Hara then got in on the mix with a goal in the 59th minute and Moke delivered his second goal of the match in the 71st minute.

GSW outshot TC 24-17 for the match. The Tornadoes took one more corner kick than did the Hurricanes (6-5) and committed four more fouls (16-12). The match was an extremely physical affair, as a total of 11 yellow cards were issued between both teams. One red card was issued to a TC player with 23 minutes remaining in the match.

Moke led all players with seven shots and O’Hara took five for the Hurricanes. GSW goalkeeper Oneil Lewis had five saves on the night.

The Hurricanes will have the weekend off before they hit the road on Wednesday, October 2, to take on Southern Wesleyan University in Central, SC. Kickoff for that match is scheduled for 4:30 p.m.

GSW will open Peach Belt Conference play when they host Clayton State University on Saturday, October 5, at 7:30 p.m. That match will coincide with the fourth-annual Canes Cornhole Championship.