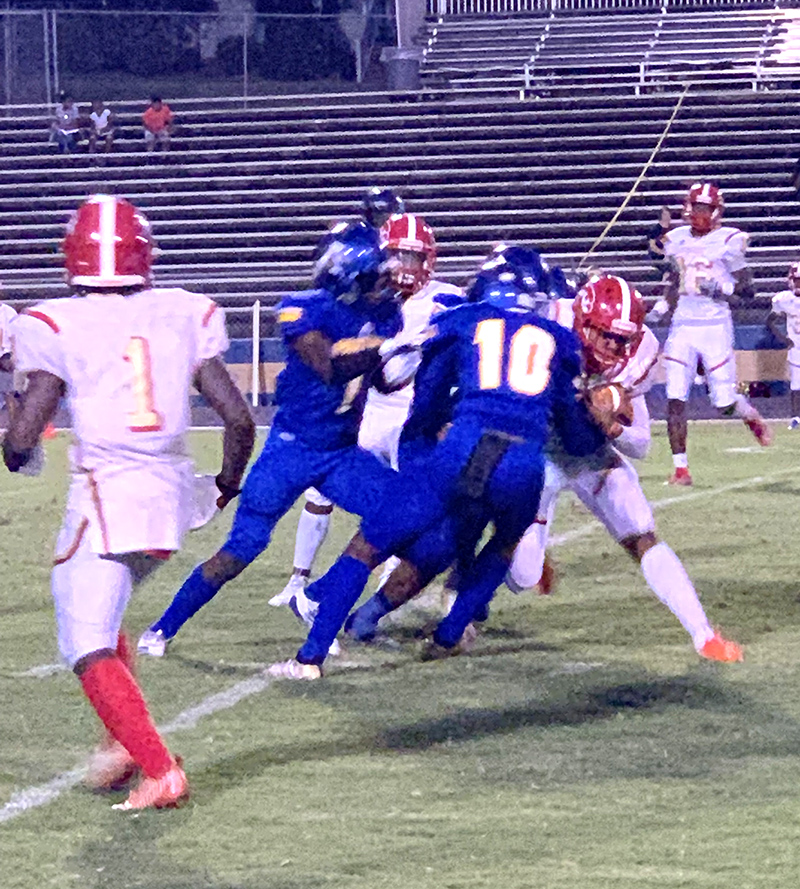 AMERICUS – The Americus-Sumter High School football team (ASHS) fought extremely hard on Homecoming Night. They were able to take the Hardaway Hawks (HHS) into overtime. However, trailing 20-14 in overtime, they were unable to score a touchdown on fourth down and three as wide receiver Hashim Haugabook was tackled to end the game. The Panthers fell to the Hawks 20-14 on Friday, September 27, at Alton Shell Stadium.

It was a defensive struggle between both teams, but it ended in heartbreak for ASHS. The loss drops the Panthers to 2-3 overall and 2-1 in the Region 1-AAAA standings. 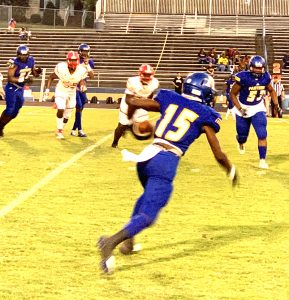 The Hawks won the toss, but deferred until the second half, allowing the Panthers to receive the ball first. The Panthers were able to move the ball down to the HHS 10-yard line, but the drive bogged down and they had to settle for a 37-yard field goal by Alexis Vasquez. 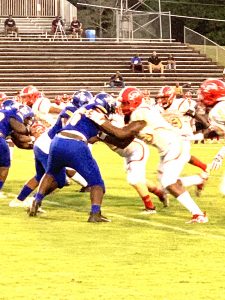 On the Hawks’ first possession, they were able to move the ball down to the ASHS 10-yard line. On second and nine from the Panthers’ 10, defensive lineman Marcus Douglas was able to tackle HHS running back Sayvion Fuller for only a one-yard gain. The Panther defense was able to hold the Hawks, forcing them to attempt a field goal. However, Dallo Mendez’s kick was tipped at the line of scrimmage and no good.

However, on the Hawks’ next possession, they were able to move the ball down to the ASHS 22-yard line. The Panther defense came up with some big plays, forcing a fourth and five situation for the Hawks. However, HHS quarterback Javion Toney threw a short pass to Tahjee Hudson. At first, Hudson appeared to be stopped for a very short gain, but he broke a few tackles and scored a 22-yard touchdown. The point-after attempt by Mendez was good and the Hawks had a 7-3 lead. 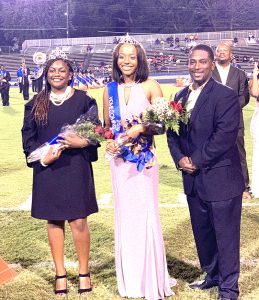 On the Panthers’ next possession, they once again were able to move the ball deep into HHS territory. On second and 17, ASHS quarterback Kanova Willoughby was able to run the ball down to the five-yard line. However, the HHS defense stopped the Panthers on the next two plays and the ball went over on downs.

Neither team could put any more points on the board before the half and both teams went into halftime, with the Panthers trailing 7-3. 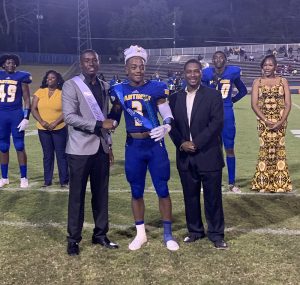 ASHS senior wide receiver A.J. Stokes was crowned as the 2019 ASHS left is Homecoming King. To the right is principle Kimothy Hadley and to the left is the 2018 Homecoming King and former quarterback Kierston Harvey.
Photo by Ken Gustafson

For much of the third quarter, it was a defensive stalemate. However, the Panthers were able to move the ball into HHS territory. ASHS wide receiver Kylen Carter scored from 45 yards out on a jet sweep, but it was called back due to a holding penalty. ASHS had to settle for a 35-yard field goal by Vasquez, cutting the deficit to 7-6.

The Panthers committed a costly turnover in the fourth quarter when the ball was snapped over Willoughby’s head and the Hawks recovered the ball. A few plays later, Toney scored a touchdown on a quarterback keeper from two yards out. The extra point was good, and the Panthers trailed 14-6.

However, things changed quickly for ASHS. The Panthers had the ball at their own 40-yard line. Willoughby mishandled the snap, but was able to hold on to the ball and ran it 60 yards for a Panther touchdown. Trailing 14-12, ASHS decided to go for two points to tie the game. Willoughby threw a short completion to Kylen Carter to tie the game at 14-14 with just under eight minutes left in the game. 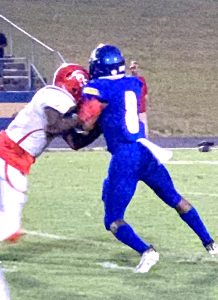 ASHS outside linebacker Calvin Wright II is engaged with a Hardaway blocker. Wright made a key tackle in regulation to give the Panthers a chance in overtime.
Photo by Ken Gustafson

The Panther defense was able to stop the Hawks on their next possession and they got the ball back with excellent field position. Once again, the ASHS offense moved the ball down inside the HHS 20-yard line. However, the drive bogged down and the Panthers were forced to attempt another field goal. Unfortunately, Vasquez’s 35-yard attempt hit the left up right. That miss would eventually prove to be costly.

In the waning minutes of the game, the Hawks were able to move the ball down inside the ASHS 30-yard line, but A.J. Stokes and Calvin Wright III came up with some big defensive plays. Wright tackled HHS running back Garren Thibodeaux behind the line of scrimmage and Stokes came up with two sacks. Time ran out in the fourth quarter and the game would have to be decided in overtime.

The Hawks got the ball first to begin the overtime period. They started from the ASHS 25-yard line. Thibodeaux ran the ball down to the five-yard line and Toney scored on a quarterback keeper. However, the extra point attempt was botched when the holder mishandled the snap, making the score 20-14 Hawks. All the Panthers would need is a touchdown and an extra point to win.

On the Panthers’ first possession in OT, they benefited from an off sides call against HHS. On the next play, running back Christian Waymon got three yards. Then running back Keyvontay Nelson ran the ball down to the HHS seven-yard line, making it third and short from the seven. However, Waymon lost yardage on his next carry, making it fourth down and three. This was the ball game. On fourth down, Willoughby tossed the ball off to Haushim Haugabook, but Haugabook was tackled to end the game.

The Panthers will have the next week off and will prepare to host Columbus High School in another Region 1-AAAA contest on Friday, October 11, at 7:30 p.m.