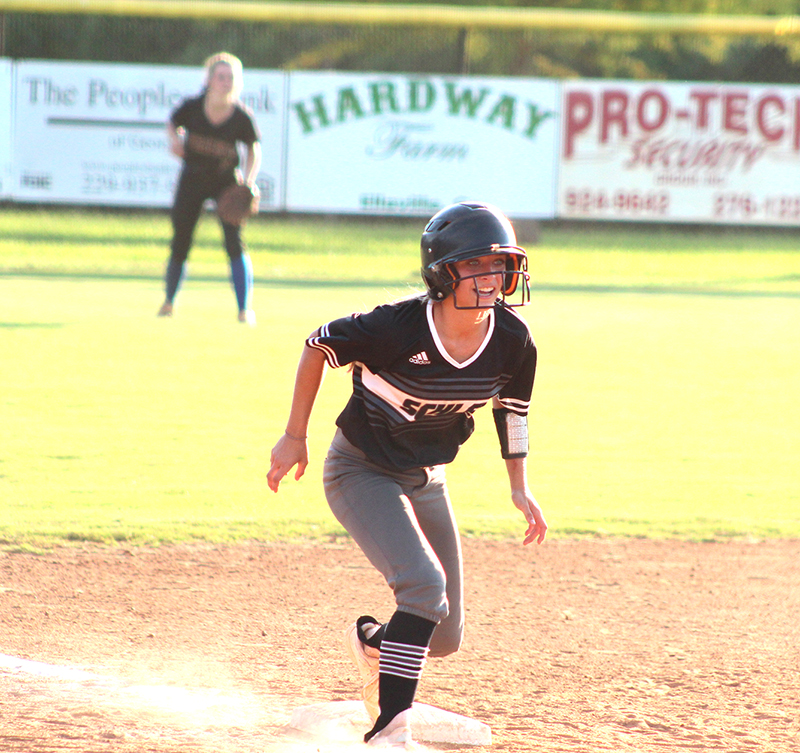 Schley County centerfielder Alexis Bradshaw is seen here competing in an earlier game this season. Bradshaw went 2-for-4 with an RBI double to help the Wildcats get the 5-2 victory over Crisp County. ATR Archive

CORDELE, GA – The Schley County Wildcat softball team (SC) scored two runs in the first inning, two in the second and one in the sixth to earn a hard-fought 5-2 victory over Crisp County in a rematch that took place on Monday, September 30, at Crisp County High School (CCHS).

SC centerfielder Alexis Bradshaw went 2-for-4 at the plate with a double and two RBIs to lead the Wildcats to victory. Earlier in the season, the Wildcats edged out the Cougars 8-7 in Ellaville on Wednesday, September 4.

In addition to Bradshaw’s offensive production, Nyiah Kelley and Hannah Crawford each went 2-for-3, with Crawford scoring a run.

SC pitcher Saige Whaley once again had a strong outing. She gave up two runs on six hits and one of those runs was earned. She struck out four batters and walked two.

Bradshaw led off the game by reaching second base on an error. Nyiah Kelley then executed a sacrifice bunt, advancing Bradshaw to third. Rene Rix then belted an RBI single to give the Wildcats a 1-0 lead. Later on in the inning, Perri DeVane drove in a run on a single to increase the SC lead to 2-0.

The Wildcats scored two more runs in the fourth inning to take a 4-0 lead. With a runner on second with one out, Bradshaw doubled to center field, scoring Hannah Crawford to give the Wildcats a 3-0 lead. Nyiah Kelley then singled to center field, allowing Bradshaw to advance to third. Rix then drove in a run on a sacrifice fly to give SC a 4-0 lead.

The Cougars scored a run in the bottom of the third inning when Macy West hit a sacrifice fly, scoring Jo Brady for their first run of the game.

The Wildcats added their fifth and final run of the game in the top of the sixth when Bradshaw drove in Tamia Kelley on an RBI single.

The Cougars added another run in the bottom of the seventh when Sara Ruth Raines drove in Riley Blampied on an RBI single. However, with runners at second and third with two outs, Whaley was able to get Macy West to ground out to first baseman Berkley Goodin to end the game.

Jo Brady led the Cougars’ offense by going 2-for-4 at the plate with a run scored. CCHS starting pitcher Olivia Bridges took the loss. Bridges gave up five runs on nine hits, but only one of those runs was earned. She walked none and struck out two SC batters.

One big factor in the outcome of this game was the five errors committed by the Cougars.

With the win, the Wildcats improve to 18-5 overall and 11-2 in Region 4-A play. They will return to region play when they travel to Roberta, GA to take on Crawford County on Tuesday, October 1. First pitch is scheduled for 5:55 p.m.