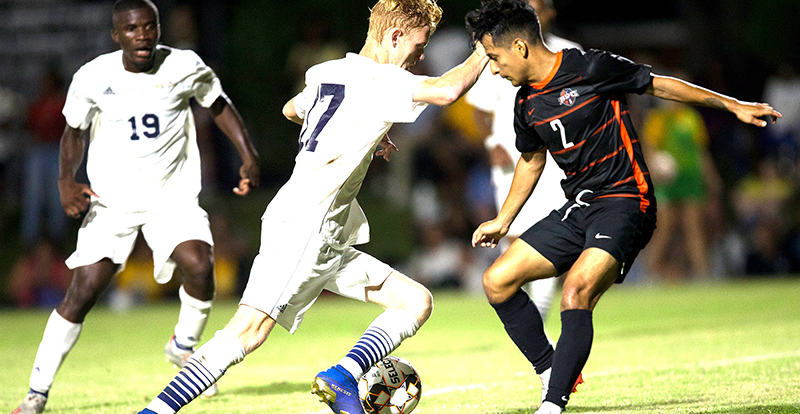 GSW junior forward Kellan O’Harra (17) is seen here in a previous game. O’Hara scored the first goal of the game in the Hurricanes’ 2-1 overtime win. Photo by Arthur Thompson

Moke scored the decisive goal in the 98th minute to give the Hurricanes the thrilling overtime win.

Freshman forward Sebastian Da Silva delivered a soft, lofted free kick from 35 yards straight away that Moke ran under. Moke was able to get his head on the ball and direct it past the SWU goalkeeper for the overtime win.

A goal by junior forward Kellan O’Hara in the 78th minute of regulation gave the Hurricanes a 1-0 lead, but SWU got the equalizer less than a minute afterward by converting a penalty kick.

Up next for GSW is the Peach Belt Conference opener on Saturday, October 5. They will be hosting Clayton State University at Hurricane Field at 7:30 p.m.