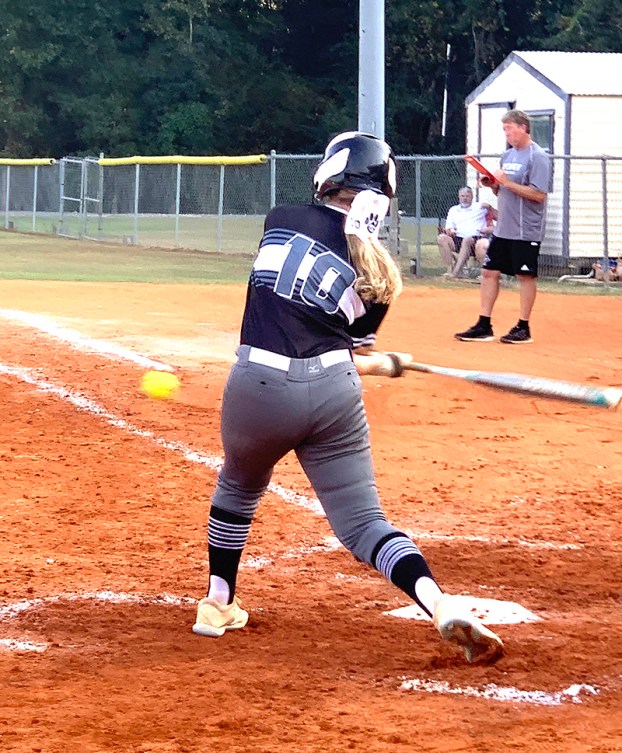 Schley County’s Rene Rix is seen here batting against Crawford County on Tuesday, October 1. In the win over Westfield one day later, Rix went 2-for-4 with an RBI double. Photo by Ken Gustafson

ELLAVILLE – the Schley County Wildcat softball team (SC) won their third game in a row this week, as they withstood a six-run rally by Westfield (WS) to hold on for a 7-5 win over the undefeated Hornets on Wednesday, October 2, at Schley County High School.

The Hornets came into this game as the defending GISA state champions and hadn’t lost a game in two years.

To make it even more special, it was Senior Day at SC. Seniors Tamia and Nyiah Kelley, Saige Whaley and Alexis Bradshaw were honored for their contributions to the Wildcat softball program.

The Wildcats scored four runs in the first, two in the second and one in the third to take a 7-1 lead. However, the Hornets responded with a run in the fifth and three in the top of the sixth and came close to staging a come-from-behind victory.

SC scored four runs on five hits in the bottom of the first inning. Saige Whaley, Perri DeVane and Ashlyn Childs each drove in RBIs on singles in the inning.

After the Hornets scored a run in the top of the second, the Wildcats responded with two more runs in the bottom half of the inning. With a runner on second and two outs, Rene Rix belted an RBI double to left field to increase the SC lead to 5-1. Later in the inning, Rix was able to score on an error by the WS second baseman, making it 6-1 Wildcats.

SC added another run in the bottom of the third when Hannah Crawford drove in DeVane on an RBI single. That would complete the scoring for the Wildcats in the game.

However, the Hornets showed why they had been undefeated throughout the season. They responded with a run in the top of the fifth inning. They took advantage of two errors committed by the Wildcats. With runners at first and third and nobody out, Sydney Langdon singled in a run to cut the SC lead to 7-2. Then in the top of the sixth, the Hornets nearly pulled off the comeback. With runners at first and second and nobody out, they scored a run on an RBI single. This was followed by a sacrifice fly by Avery Adams, cutting the Wildcats’ lead to 7-4.

Langdon then singled home another run to bring the Hornets to within two at 7-5. However, the Wildcats were able to get out of the inning without any further damage and hung on to win.

Rix, DeVane and Tamia Kelley each had two hits in this game. DeVane also scored two runs and drove in two more.

The Wildcats used several pitchers in this game. Childs started the game and pitched three innings. She gave up one run on three hits, struck out none and walked two. DeVane came on in relief of Childs. She gave up one hit in one inning of work.

Makena Wurtz relieved DeVane in the fifth. Wurtz gave up four runs on two hits, but only one of those runs was earned. Saige Whaley was the final pitcher of record for the Wildcats. Whaley pitched two innings and gave up no runs on two hits.

Defensively, the Wildcats struggled in this game. They committed six errors, while the Hornets committed three.

With the win, the Wildcats finish the regular season at 20-5. They will go into the Class A-Public State Playoffs as the #2 seed out of Region 4-A.

ALBANY, GA – The Americus-Sumter junior varsity football (1-4) team lost to the Monroe Tornadoes (MHS) by the score of... read more