MANCHESTER, GA – It was a fitting end to a perfect season for the Schley County Middle School football team (SCMS). The Wildcats took a 28-6 lead at the half and never looked back on their way to a 44-20 victory over Manchester (MMS) to win the Region 4 Middle School Championship on Wednesday, October 9, at Manchester High School.

SCMS head coach Ernest Scott gave much of the credit for the Wildcats’ success to the defense. Before Wednesday’s championship game, the Wildcats had not given up more than one touchdown all year. “That’s expected. You’re in a championship game,” Scott said. “Both teams were undefeated. That was a good ball club over there on the other side, but I mean, I think we were better. Our kids came out. They stayed disciplined. They knew it was going to be tough, but they didn’t fold. The defense stood up and the offense just does what they do every game. They put points on the board.” 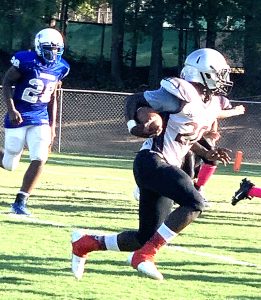 Scott went on to say that he and his staff gave the Blue Devils a different look on offense. “We stayed in the jumbo package this time around. Normally, we line up with two receivers on the outside or in a pro set (one tight end, two receivers), but this time, we were in a jumbo package the whole time with two tight ends. It kind of helped us out a whole lot because everybody tries to stop us from getting to the outside, but we played well. I’m proud of these kids. They did a really good job.” 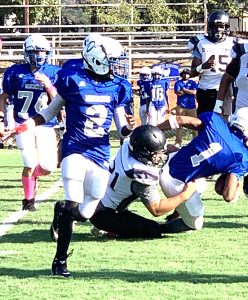 As they had done all season, the Wildcats went to work early and they did it with a strong running game. Running back Zayden Walker ran the ball 27 yards for the game’s first touchdown. The two-point conversion by Jalewis Solomon was good and the Wildcats owned an early 8-0 lead with 6:47 to go in the first quarter.

The SCMS defense was able to hold the Blue Devils on their first possession and get the ball back to the Wildcat offense. SCMS added to their lead when Solomon ran the ball 67 yards for another Wildcat touchdown. The two-point conversion by Jack Clark failed, but the Wildcats had a 14-0 lead with 4:16 left in the first quarter. 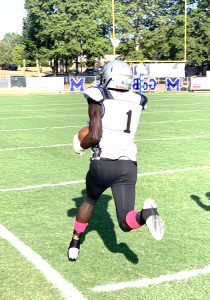 SCMS running back Jalewis Solomon races down the sidelines to score one of his three touchdowns in the Wildcats’ 44-20 victory.
Photo by Ken Gustafson

However, the Blue Devils responded by moving the ball down into SCMS territory. They capped off their drive when running back Anthony Bartholomew scored a touchdown on a 15-yard run. The two-point conversion attempt failed, but MMS had cut the Wildcats’ lead to 14-6 with 1:13 to go in the first quarter.

However, the MMS touchdown did not phase the Wildcats. SCMS went back to work as Solomon scored another long touchdown, this one from 61-yards out. The two-point attempt by Walker was successful and the Wildcats pushed their lead back up to 16 at 22-6. 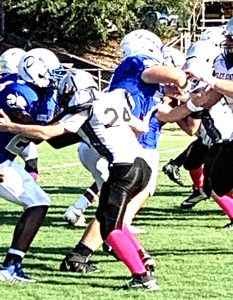 With 1:33 left before halftime, Walker scored his second touchdown of the day on a four-yard run. Clark ran the ball in for the two-point conversion to give the Wildcats a 28-6 halftime led.

The Wildcats went back to work in the third quarter when Walker scored his third touchdown of the game. The two-point conversion by Walker was good, giving the Wildcats a 36-6 lead. 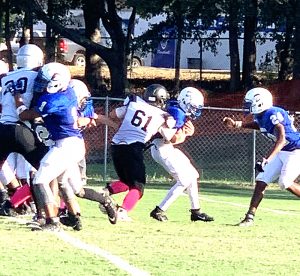 The Blue Devils struck back when Bartholomew scored his second touchdown of the day on a 65-yard run. The two-point conversion was scored by Jayden Washington to cut the Wildcats’ lead to 36-14 with 7:45 to go in the game.

SCMS got another touchdown from Solomon on a 39-yard run. Solomon scored the two-point conversion and the Wildcats had increased their lead to 30 points at 44-14. 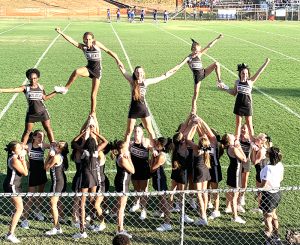 The Blue Devils were able to get another touchdown by Bartholomew on a 14-yard run with 5:33 to go in the game, but the game and the championship would belong to SCMS.

The Wildcat defense also had a stellar performance. Angle Messeus and Carson Westbrook each had five tackles, including one tackle for a loss. Trenton Stubbs had three tackles for a loss and one sack on the day. Sam Forehand also came up big, as he he had one interception and two tackles in the game.