Wildcats shoot themselves in the foot against Macon County 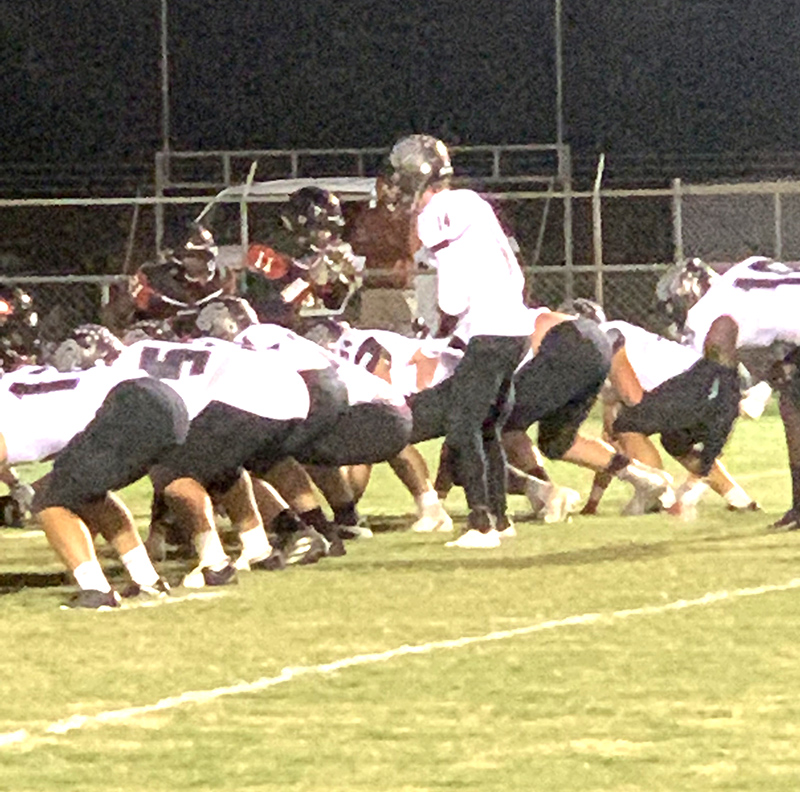 The Wildcats are now 4-3 overall and 3-1 in their sub-region. Region 4-A is divided into two sub-regions. As far as what this means for winning the sub-region, if Dooly County defeats Taylor County, there will be a three-way tie between Schley County, Macon County and Dooly County. It would then be decided by power rankings.

While the offense struggled all night with penalties and turnovers, the SC defense played extremely well throughout the game and kept the Wildcats in it. 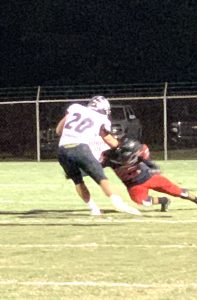 Schley County running back Trent Bivins catches a pass out of the backfield.
Photo by Ken Gustafson

Things did not start off well for the Wildcats. Early in the first quarter, quarterback Garrett Peavy’s pass was intercepted by Davion Clark of the Bulldogs. MC took advantage of the turnover by moving the ball deep into SC territory. A few plays later, MC running back Devonta Walters scored the Bulldogs’ first touchdown. MC’s two-point attempt was good and the Bulldogs had an early 8-0 lead.

However, the Wildcats struck back when Zamon Ross returned the kickoff all the way back for a touchdown. The extra point attempt by Aaron Pinckard was no good, but the Wildcats were back in the game, trailing 8-6.

However, the Bulldogs responded with another drive that ended in another touchdown. Quarterback Landon Austin scored on a quarter keeper and scored the two-point conversion to extend the Bulldogs’ lead to 16-6.

The Wildcats responded like champions on their next drive. Aided by a personal foul penalty against the Bulldogs, the SC offense was able to move the ball down into MC territory. Zykevious Walker was then able to score a rushing touchdown from a few yards out. The two-point conversion attempt failed, but the Wildcats had cut the Bulldogs’ lead to 16-12 by halftime. 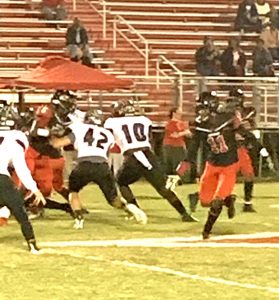 SC outside linebacker Tyler Vickery (42) and defensive end Zykevious Walker (10) both are trying to make a play on defense.
Photo by Ken Gustafson

With 4:40 to go in the third quarter, the Wildcats had the ball at the MC 40-yard line and were facing a fourth down and four situation. Peavy threw a 40-yard touchdown pass to Jarrett Long. The extra point attempt by Demarkis Clark was no good, but the Wildcats had an 18-16 lead.

However, the Bulldogs struck again with a long touchdown run by Davion Clark.

MC tried a two-point conversion. Austin threw the ball to a wide receiver that was covered by Garrett Peavy. Peavy was able to knock the pass away, but was called for pass interference, giving the Bulldogs another chance to get two points. 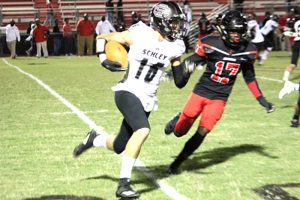 On the second two-point try, running back Brandon Cochran scored to give the Bulldogs a 24-18 lead with less than seven minutes left in the third quarter.

On the Wildcats’ next possession, they used the running game to move the ball into MC territory. However, on second down, the Wildcats fumbled the football and the Bulldogs at their own 45-yard line recovered it.

MC began a steady drive by keeping the ball on the ground and running clock. However, Austin was able to find his receiver for a big gain and they got extra yardage from a roughing the passer penalty against the Wildcats. This moved the ball inside the SC 20-yard line. Then a few plays later, Austin ran a quarterback keeper down to the one-yard line. At this point, SC head coach Darren Alford called timeout with 1:00 left in the third quarter. After the timeout, the Wildcats stopped the Bulldogs on third and goal, forcing a fourth down situation. On the next play, MC was flagged with a false start penalty, pushing the ball back to the six-yard line. At this point, the third quarter ended with MC owning a 24-18 lead.

To begin the fourth quarter, the Wildcats were able to stop the Bulldogs on fourth down and got the ball back at their own 10-yard line. 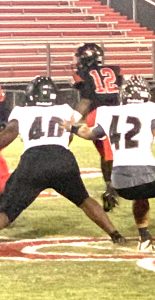 Due to a holding penalty and an illegal procedure penalty, the Wildcat offense stalled and SC was forced to punt the ball away. However, the SC defense was able to stop the Bulldogs on their next possession and with 5:34 to go in the game, the SC offense had a chance to make a game-tying drive. However, two back-to-back false start penalties pushed the Wildcats back to their own 15-yard line. Then the ball was snapped over Peavy’s head and he had to recover the ball at the SC five-yard line. At this point, it was fourth down and the Wildcats punted the ball away with 2:25 left to go. The defense would have to make a stop for the offense to get one last shot at tying the game.

Up next for SC is a road trip to Roberta, GA for a region game against Crawford County. Kickoff is scheduled for 7:30 p.m.