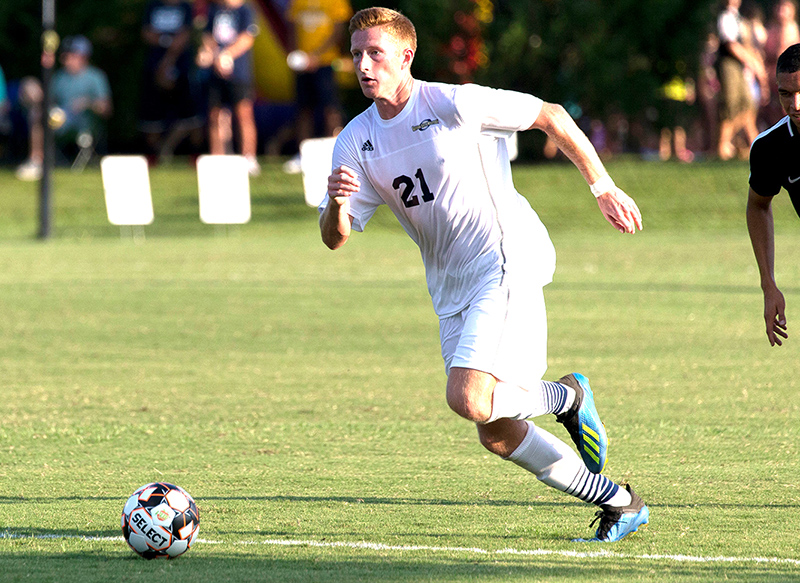 GSW senior midfielder Caleb Zolman is seen here advancing the ball up the field in a previous game. The Thomaston, GA native took two shots in the match against USCA and one of them was on goal. Photo by Arthur Thompson

AIKEN, SC – The Georgia Southwestern State University men’s soccer team (GSW) traveled to Aiken, SC on Sunday, October 20, for a chance to earn a Peach Belt Conference (PBC) win against the University of South Carolina Aiken (USCA). Unfortunately for the Hurricanes, even though they battled through regulation and two overtime periods, they came out on the short end as USCA’s Giuseppe Cimino scored during the second overtime to hand GSW a tough 1-0 loss.

It was an extremely physical match as both teams were issued a red card and a yellow card. In the 42nd minute, GSW’s Cole Davison got in a scuffle with USCA’s Renaldo Bailey. Both Davison and Bailey were each issued a red card and both were ejected for the remainder of this game as well as their teams’ next game. For the remainder of the game, each team played a man down (10 v 10).

USCA outshot the Hurricanes 17-11 for the entire game.

The Hurricanes will try once again to earn their first PBC win of the season when they host Francis Marion University on Saturday, October 26, at 7 p.m.