Lady Wildcats fall to GMC in first round of state playoffs 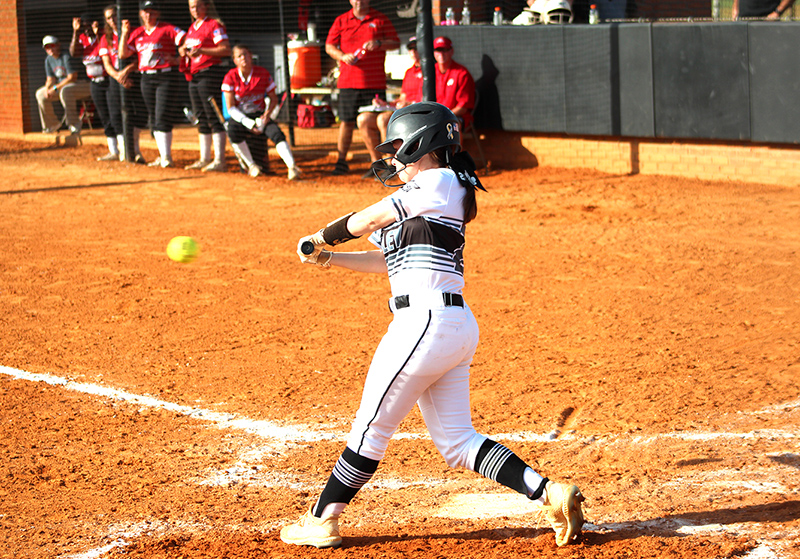 Schley County shortstop Hannah Crawford went 3-for-10 at the plate with three singles, a run scored and an RBI in the playoff series against Georgia Military College (GMC). Photo by Sheila DeVane

ELLAVILLE – Members of the 2019 Schley County Lady Wildcats’ softball team (SC) were hoping that this was the year that they would be able to make a run through the Georgia High School Association (GHSA) Class A-Public State Playoffs and win a state championship. However, things did not go as planned as the Lady Bulldogs of Georgia Military College (GMC) defeated the Lady Wildcats in the first round by winning the best of a three-game series and ending the season for SC. 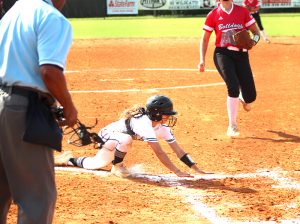 In Game 1, SC scored three runs in the bottom of the first inning and two more runs in the bottom of the second to secure a 5-1 win. The Lady Wildcats scored five runs on seven hits and took advantage of five errors committed by GMC. Saige Whaley, Nyiah Kelley, Perri DeVane, Berkley Goodin, Tamia Kelley, Landry Whaley and Alexis Bradshaw each got a hit in this game, while Bradshaw and the Whaley sisters each drove in a run. The Lady Wildcats only committed one error in this game.

SC starting pitcher Saige Whaley did what she had done all season: pitch a dominating game. Whaley pitched all seven innings and gave up only one run on seven hits. She walked none and struck out one batter. 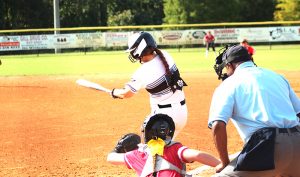 Schley County first baseman Berkley Goodin is seen here hitting a double. Goodin went 3-for-8 with a double and a home run in the three-game series against GMC.
Photo by Sheila DeVane

In Game 2, the Lady Wildcats had a 7-6 lead going into the bottom of the seventh. They were three outs away from taking the series and advancing on to the next round of the playoffs. However, the Lady Bulldogs would strike back to save their season. With runners at second and third and nobody out, Kyra Dobler executed a fielder’s choice bunt and an error was committed by SC second baseman Darden Campbell. This allowed the tying run to score. Then Josie Deason drove in the winning run when she singled to center field.

Both teams were plagued by errors in this game. While the Lady Bulldogs committed four errors, the Lady Wildcats committed a total of seven errors, which proved to be extremely costly.

SC tallied a total of 10 hits, including a home run by DeVane. Alexis Bradshaw led the Lady Wildcats by going 3-for-4 at the plate, scoring two runs and driving in another. Hannah Crawford also had a solid game at the plate. Crawford went 2-for-4 with two singles, a run scored and an RBI.

Ashlyn Childs started the game in the circle for the Lady Wildcats. Childs pitched a little over an inning and gave up three runs on two hits, but none of those runs were earned. She walked one batter and struck out one. Whaley came on in relief of Childs and pitched the rest of the game. She gave up five runs on six hits, but only one of those runs was earned. Whaley walked one batter and struck out one. 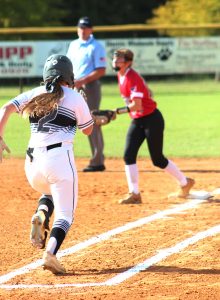 Schley County catcher Landry Whaley is seen here trying to leg out a base hit. For the series, Whaley was 3-for-11 at the plate with a two-run home run in Game 3 of the series.
Photo by Sheila DeVane

While the Lady Wildcats still had a chance to win the series and move on in the playoffs, the Lady Bulldogs’ win in Game 2 on Deason’s walk-off single seemed to inspire them to push through and take the decisive Game 3. They did just that by outscoring the Lady Wildcats 15-7 to win Game 3 and the series. The Lady Bulldogs scored 15 runs on 13 hits, but were aided by eight errors committed by the Lady Wildcats. SC only committed one error in Game 1, which they won 5-1, but committed a total of 15 errors in the next two games, which led to their undoing.

SC tallied a total of 10 hits in Game 3, including home runs by Landry Whaley and Berkley Goodin. Nyiah Kelley and Saige Whaley each went 2-for-3 at the plate. Kelley scored two runs and drove in one RBI, while Whaley scored one run. 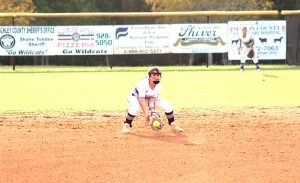 Goodin belted a two-run home run in the bottom of the fifth inning with two outs to pull the Lady Wildcats to within four runs at 10-6.

Whitley Ward led GMC’s offensive attack in Game 3. She went 3-for-5 at the plate with two doubles, two runs scored and two RBIs.

Wildcats shoot themselves in the foot against Macon County