No. 4 Flagler too much for Lady Hurricanes 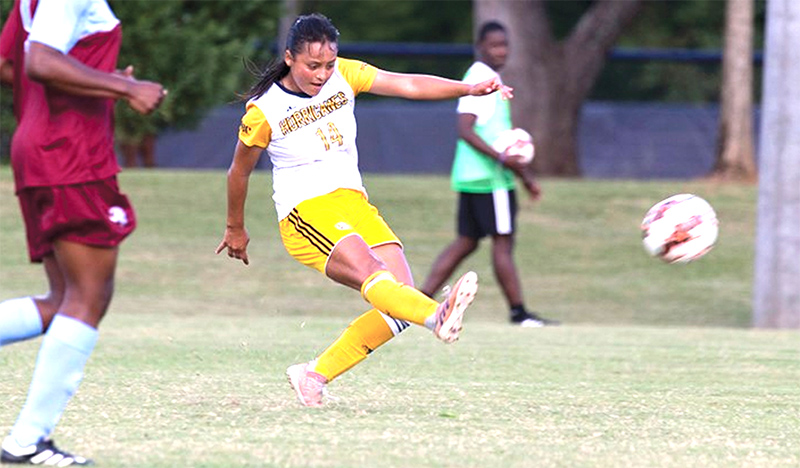 GSW freshman forward Geraldine Alvarez seen here competing in a previous match. The Bogota, Colombia native has one goal and three assists on the season. Photo by Arthur Thompson

AMERICUS, GA – The Georgia Southwestern State University women’s soccer team (GSW) trailed No. 4 ranked Flagler College (FC) 1-0 in the 40th minute before GSW freshman forward Payton Johnson found a free ball behind the FC defense and scored her fourth goal of the season, tying the match at 1-1. Unfortunately, that was the only bright spot in the match for the Lady Hurricanes as the Saints scored five goals in the second half to earn a 7-1 Peach Belt Conference (PBC) victory over GSW on Wednesday evening, October 23, at Hurricane Field.

Johnson led GSW in shooting by taking four of the team’s six shots on the evening.

The Saints were led in scoring by Sara Sandberg, Annie Habeeb and Liz Hall. All three players had two goals each.

Sandberg put FC on the board first in the seventh minute with a quick goal, but the Lady Hurricanes were able to answer with Johnson’s equalizer in the 40th minute.

However, the Saints scored before halftime when Sandberg found the back of the net off a blocked shot for her second goal of the match.

In the second half, FC took total control of the match by scoring five goals to seal their 7-1 victory. For the match, the Saints had a 28-6 advantage over GSW on shots, followed by an 11-5 advantage with shots landing on goal. The Saints also led in the number of corner kicks taken (10-1).

Up next for the Lady Hurricanes is a trip to Pembroke, NC for an 11 a.m. match against the Lady Braves of UNC Pembroke on Saturday, October 26.