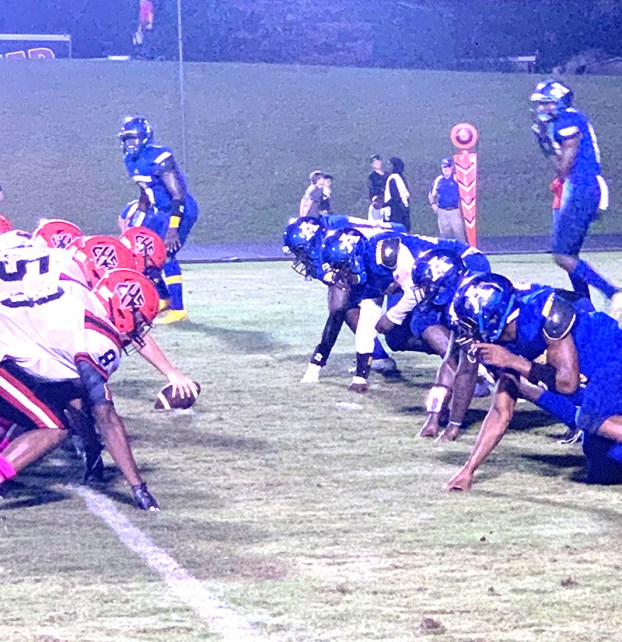 The Americus-Sumter defensive line is getting ready to try to stop the Cairo offense from scoring. Photo by Ken Gustafson

AMERICUS, GA – For all of the seniors on the Americus-Sumter High School football team, Friday night’s game against Cairo (CHS) would be their last regular season home game and they were hoping to go out in style with a win over the Syrupmakers. Unfortunately for the Panthers, though they mounted a strong comeback, they struggled on both sides of the ball during the first half and fell to CHS 39-19 on Friday, October 25, at Alton Shell Stadium.

Things got off on the wrong foot for the Panthers early in the first quarter when quarterback Kanova Willoughby’s pass was intercepted, giving the Syrupmakers great field position. CHS quarterback Robert Matthew Peters would later throw a touchdown pass to Marquil Lovejoy to give the Syrupmakers a 6-0 lead. 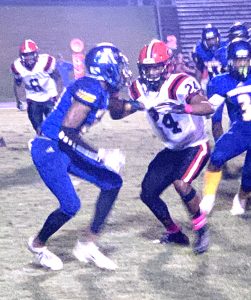 ASHS defensive back Breylon Green (left) and outside linebacker A.J. Stokes try (right) to fight their way past Cairo running back Tay Solomon, who is acting as a blocker.
Photo by Ken Gustafson

The ASHS offense continued to struggle in the first quarter and the Syrupmakers were able to take advantage. Peters would later throw a 40-yard touchdown pass to Earnest Taylor. The extra point was good and CHS led 13-0.

The Surupmakers added to their lead when John Carter ran the ball in for a touchdown. CHS decided to go for two points. Peters threw a short pass to Lovejoy in the end zone and the Syrupmakers had a 21-0 lead.

However, the tied began to turn in favor of the Panthers. The Syruopmakers had the ball again deep in ASHS territory, but a personal foul penalty and a false start penalty backed up the CHS offense. This would eventually lead to the Panthers getting the ball back on offense. 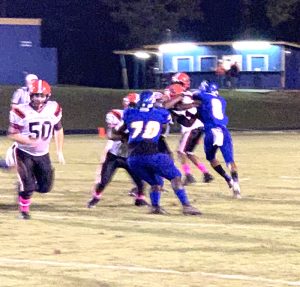 The Panthers started out deep in their own territory, but running back Keyvontay Nelson would bring life back into the ASHS team. Nelson broke through the CHS defensive line and ran the ball 70 yards for a touchdown, the PAT by Alexis Vasquez was no good, but the Panthers were on the scoreboard and back in the game, trailing 21-6.

The Panther defense responded by forcing a turnover. They were able to force a fumble and Bradley Perry was able to recover it to give ASHS great field position. Willoughby then threw a long pass to Trevian Thomas. Then Willoughby scored on a quarterback keeper to bring the Panthers to within nine at 21-12. The PAT try was no good due to a bad snap, but the Panthers were back in the game.

The Syrupmakers were able to move the ball down the field on their next possession and got a 38-yard field goal by Noah Jones just before the half, but the Panthers only trailed 24-12 at halftime. 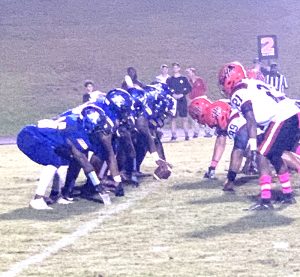 The Americus-Sumter offensive line is poised and ready to block the Cairo defensive line.
Photo by Ken Gustafson

In the third quarter, the Panthers continued to crawl back into the game. The Syrupmakers got the ball to start the second half, but ASHS defensive back Breylon Green was able to record a sack on Peters. That would eventually lead to the ASHS offense getting the ball back. On the Panthers’ next possession, Willoughby was able to move the offense into CHS territory. He would then connect with his brother, Quevoluia Willoughby, on a touchdown pass. The extra point by Vasquez was good and the Panthers were within five at 24-19.

The Panther defense made another big play on the Syrupmakers’ next possession, as they were able to recover a fumble. However, the Panther offense was unable to mount a drive and had to punt. Unfortunately, a bad snap on the punt allowed the Syrupmakers to have good field position on their own 49-yard line. 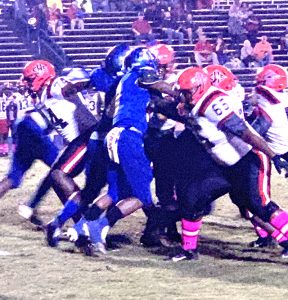 ASHS outside linebacker Calvin Wright tries to get past a Cairo offensive lineman.
Photo by Ken Gustafson

CHS quickly went to work as Peters threw a pass to Lovejoy, who was knocked out of bounds just shy of the goal line. Running back Tay Solomon scored from a yard out and the Syrupmakers converted a two-point try to increase their lead to 32-19 with 3:22 left in the third quarter.

However, the Syrupmakers began to take control in the fourth quarter. The Panther offense struggled to mount a drive and CHS was able to increase its lead on a 26-yard rushing touchdown by Tay Solomon with 7:02 remaining.

The Panthers tried to mount a drive late in the game. With 3:47 to go in the game, Willoughby found his brother for another touchdown reception, but the touchdown was nullified due to an ineligible man down field penalty. The Syrupmakers went on to win the game 39-19.

Being that both ASHS and Westover are tied for third place in the region at 4-2, it sets up a crucial game between the Panthers and the Patriots next Friday night at Hugh Mills Stadium in Albany. Kickoff is scheduled for 7:30 p.m.