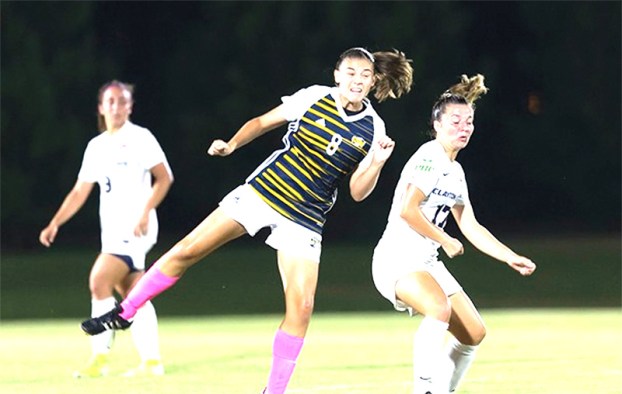 GSW senior midfielder Alison Rugel (8) had one shot on goal in the Lady Hurricanes’ 1-0 loss at UNC Pembroke. Rugel has two goals and five assists on the season. Photo by Arthur Thompson

PEMBROKE, NC – The Georgia Southwestern State University women’s soccer team traveled to Pembroke, NC on Saturday, October 26, with the hopes of ending their nine-game losing streak and earning their first Peach Belt Conference (PBC) win of the season against the Braves of UNC Pembroke (UNCP). However, in the 71st minute, UNCP’s Maya Grimes scored on a header to give the Braves a 1-0 lead and it was enough to give them the win as well.

Alison Rugel and Ashlyn Baker led the Lady Hurricanes in shots on goal with one a piece. However, UNCP dominated the run of play and it showed as they outshot GSW 23-4. In shots on goal, the Braves outshot GSW 10-2. UNCP also had a 15-1 advantage in corner kicks as the ball was played primarily to the GSW side. As a result, GSW sophomore goalkeeper Hannah Morrone recorded nine saves on the day.

The Lady Hurricanes will host their last home game of the season against Columbus State on Wednesday evening, October 30, at 7 p.m.