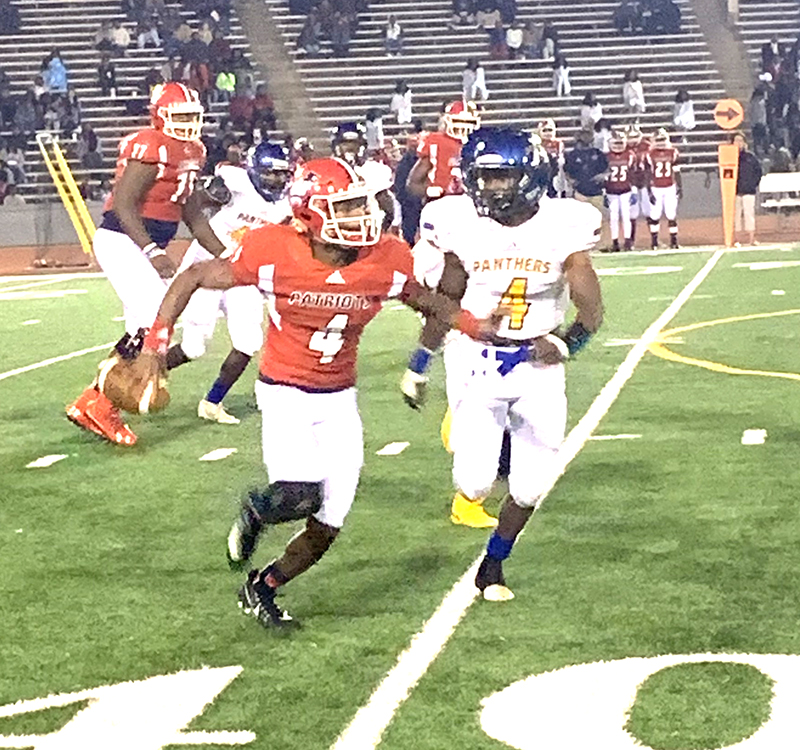 The game would decide who would take sole possession of third place in the Region 1-AAAA standings as both teams came into this contest tied for third place with a region record of 4-2. With the Panthers’ winning, they increase their overall record to 5-4 and are now in third place by themselves in the region at 5-2. More importantly, with the win, the Panthers have pretty much assured themselves a playoff spot in the GHSA Class AAAA State Playoffs.

With the loss, Westover falls to 6-3 overall and 4-3 in the Region 1-AAAA standings. 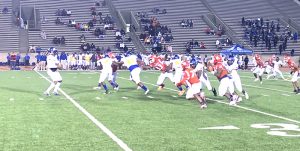 Americus-Sumter quarterback Kanova Willoughby is back to throw against Westover.
Willoubhy threw four touchdown passes in the 58-45 win over the Patriots.
Photo by Ken Gustafson

The Panthers won the toss, but elected to defer until the second half. The Patriots went right to work as they were able to move the ball down inside the ASHS 10-yard line. Then running back Julius McClellan scored a rushing touchdown from five yards out. The extra point was good and WHS had an early 7-0 lead.

However, the Panthers responded with a scoring drive of their own later in the quarter. They had the ball on their own 30-yard line before quarterback Kanova Willoughby ran the ball 65 yards down to the Patriots’ 15-yard line. A couple of plays later, running back Keyvontay Nelson scored a rushing touchdown. The extra point by Alexis Vasquez was good and the scored was tied 7-7 with 7:32 left in the first quarter.

The Panthers would later take the lead when Willoughby threw a 41-yard touchdown pass to Michael Johnson. The extra point was no good, but the Panthers were up 13-7 with 1:27 left in the first quarter 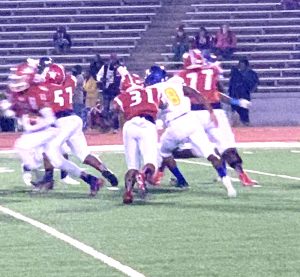 ASHS defensive back Calvin Wright III (8) tries to get into the Westover backfield to make a play.
Photo by Ken Gustafson

However, with just a couple of minutes left before halftime, Willoughby threw a 70-yard touchdown pass to Johnson. The extra point by Vasquez was good and the Panthers only trailed 21-20.

There was a block in the back penalty against the Patriots on the ensuing kickoff, which backed them up to their own five-yard line. Then the Panther defense rose up and made a huge play as Hopkins was sacked in the end zone for a safety, giving the Panthers a 22-21 lead. 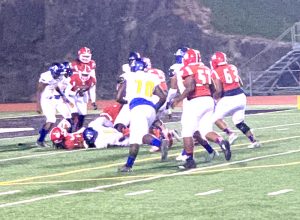 Americus-Sumter defensive back Trevian Thomas makes a tackle in the Patriots’ backfield.
Photo by Ken Gustafson

The Panthers were able to get the ball back just before the half and they moved the ball down close to the WHS 20-yard line. With just a few seconds left, Vasquez was able to kick a 32-yard field goal to give ASHS a 25-21 lead at the half.

The Panthers got the ball to start the second half and went right to work. They were able to increase their lead when Nelson scored his second rushing touchdown of the night. The Patriots responded by moving the ball down into ASHS territory again, but had to settle for a field goal by Collins Giovingo, making the score 32-24 Panthers.

However, ASHS struck again as Nelson scored his third rushing touchdown of the night to put the Panthers back up by 14 points at 38-24. The Patriots, however, wouldn’t give up as Hopkins threw a 50-yard touchdown pass to Antonio James. The extra point by Giovingo was good and the Panthers only trailed 38-31. 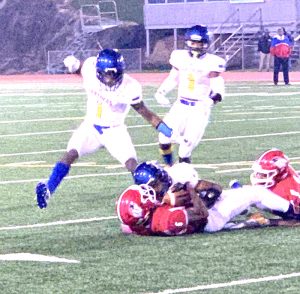 Americus-Sumter defensive back Demetric Bridges makes a tackle in the backfield.
Photo by Ken Gustafson

On the Patriots’ next possession, the ASHS defense came up with a crucial stop on fourth down and one to give the ball back to the Panther offense near midfield.

They would later take advantage as Willoughby threw a long pass down inside the 10-yard line to Johnson. Then he completed the drive with a short touchdown pass to his brother, Quevoluia Willoughby. The extra point by Vasquez was good and the Panthers had a 45-31 lead in the fourth quarter.

However, the Patriots countered with another drive of their own, capped off by a touchdown pass from Hopkins to Dailan Hall. The extra point by Giovingo was good and the Patriots had closed the gap to 45-38 with 7:57 to go in the game.

The entire second half was like a heavyweight boxing match, with each team throwing a punch and a counter punch. The Panthers struck right back as Willoughby threw another long touchdown pass to his brother Quevoluia to make the score 51-38 with 7:38 remaining. 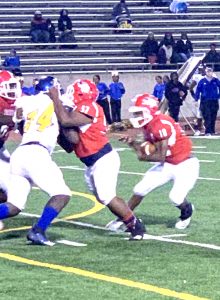 However, WHS threw the counter punch once again. The Patriots moved the ball down to the six-yard line. Then Hopkins found Hall again on a short touchdown pass to cut the Panthers’ lead to 51-45 with 3:34 to go.

The Panther offense tried to get positive yardage on their next drive to run clock. However, the Patriot defense forced ASHS to punt and WHS would get another shot to win the game. However, Hopkins’ pass was tipped and intercepted by ASHS defensive back Jawaski Whitehead. Whitehead then ran the ball all the way back for a Panther touchdown to seal the deal for ASHS.

The Panthers will close out the regular season when they travel to Columbus, GA on Saturday, November 9, for a morning contest against the top team in the region, the Tigers of Carver-Columbus. Kickoff is scheduled for 11 a.m.