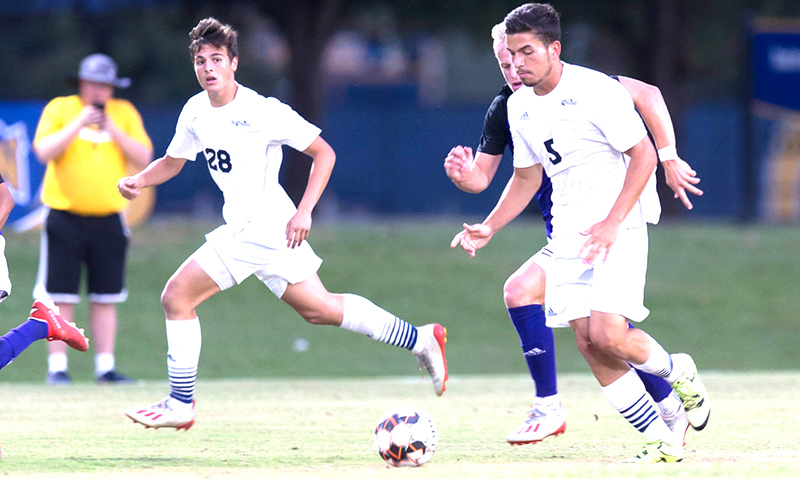 GSW senior midfielder Raphael Faria (5) is seen here with the ball during a previous match. Faria scored one goal and tallied one assist this year for the Hurricanes. Faria was one of five seniors honored on Senior Night. Photo by Arthur Thompson

AMERICUS – The Georgia Southwestern State University men’s soccer team (GSW) came into Wednesday’s Senior Night match against Flagler College (FC) hoping to send their five seniors out with a win. However, the Saints jumped out to a two-goal lead in the first half and held the Hurricanes to just two shots on goal the entire game en route to a 3-0 win over GSW on Wednesday, November 6, at Hurricane Field.

For goalkeeper Matthew Sherry, midfielder Caleb Zolman, midfielder Pedro Chung, midfielder Rafael Faria and defender Jean-Pierre Merlet, it was their last home game in a GSW uniform. All five seniors were recognized in a pre-game ceremony.

The Hurricanes caught the Saints on a hot streak. FC came into this match having won two of their last three matches. With the win, the Saints improve to 3-11-1 and 2-4 in the Peach Belt Conference (PBC). The Hurricanes have now lost four straight matches. They are now 4-10 overall and 0-6 in the PBC.

Dan McGuire gave FC the lead in the 10th minute off a corner kick deflection for his sixth goal of the season. Owen Punselie then made it a two-goal advantage when he caught the GSW defense out of position in the 36th minute.

The final goal of the game came from Linus Johansson with less than a minute to play in the match.

The Hurricanes will try one last time to earn their first PBC win of the season when they travel to Dahlonega, GA on Saturday, November 9, to take on the Nighthawks of the University of North Georgia in their final match of the season. Kickoff is scheduled for 1 p.m.