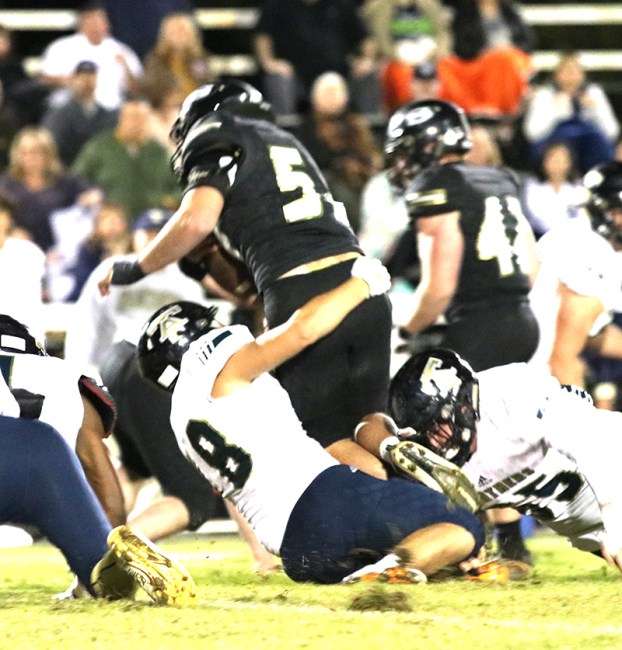 Southland Academy senior running back Hunter McCain fights for yardage against Tiftarea Academy. MCain scored one rushing touchdown in the win over the Panthers. Photo by Sherry Bass

AMERICUS – For 13 seniors on the Southland Academy Raider football team (SA), Friday night’s regular-season finale against Tiftarea Academy was their last regular-season home game in a Raider uniform. It was also one that they will never forget as they were able to topple a tough Tiftarea Academy team (TA) by the score of 14- 7 on Friday, November 8, at Harvey Simpson Stadium.

It was a low-scoring defensive struggle between both teams, but the Raider defense was able to come up with several plays to stop the offense of the Panthers and help the team earn the victory. Travis Hughes, Hunter McCain, Luke Law, Jake Kennon, James Griffin and the rest of the Raider defense made life extremely difficult for the Panthers’ offense throughout the game. 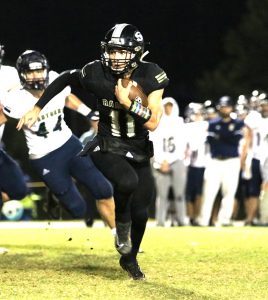 On the Raiders’ first possession, they were able to move the ball into TA territory thanks to some hard running by Owens and McCain. However, the drive stalled around the TA 20-yard line and the Raiders were forced to attempt a field goal. However, Caleb Law’s field goal attempt was wide left and the Panthers took over on downs. For the remainder of the first quarter, it was a defensive struggle between both teams and the score remained 0-0 by the quarter’s end.

Early in the second quarter, the Panthers were mounting a drive before SA defensive back Adam Smith came up with an interception. However, the Raiders’ ensuing drive stalled and the Panthers were able to get the ball back. 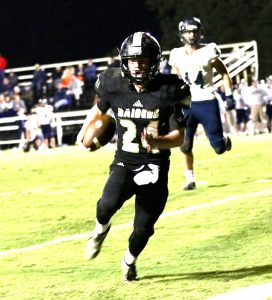 However, the SA defense came up big again when Riley Parker recorded a sack. The Panthers were flagged for both a personal foul and a facemask, pushing them deep into their own territory. They eventually had to punt, giving the Raiders excellent field position at the TA 27.

On their next offensive possession, the Raiders were able to move the ball down to the TA 13-yard line. On second down and eight from the 13, Owens ran the ball into the end zone for an apparent touchdown, but the score was nullified due to a holding penalty on the Raiders. The penalty pushed the ball back to the SA 22-yard line. However, SA quarterback Landon Law was able to complete a pass to his brother, Luke Law, down at the TA four-yard line.

A couple of plays later, Owens scored a touchdown from a yard out. The extra point by Caleb Law was good and the Raiders had a 7-0 lead with a little over two minutes left in the first half.

However, the Panthers responded by moving the ball down into SA territory, but once again, the Raider defense was able to put a halt to the TA drive. On fourth and six from the SA 45-yard line, TA quarterback Logan Crosson tried to get the necessary yardage on a quarterback keeper, but was stopped short of the line to gain. Both teams went into halftime with the Raiders leading 7-0.

In the second half, the Raider defense continued to make huge drive-stopping plays against the Panthers. Crosson attempted to complete a long touchdown pass, but his pass was intercepted and ran out of the end zone by Luke Law. 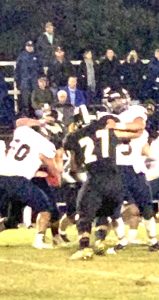 Southland senior defensive lineman Luke Henson (27) tries to fight his way into the TA backfield to make a play.
Photo by Ken Gustafson

The Raiders would later be penalized for unsportsmanlike conduct, but were able to overcome it. On second down and 25 from the SA 43-yard line, Owens broke through the TA defensive line and scampered 46 yards before he was run out of bounds at the TA 11. Then on first and 10 from the 11, McCain scored a rushing touchdown. The extra point by Caleb Law was good, giving the Raiders a 14-0 lead by the end of the third quarter.

The Panthers tried to get their offense going in the fourth quarter, but the quickness and aggressiveness of the Raider defense made it almost impossible for TA to mount a drive.

However, just as it seemed the Raiders were going to win in a shut out, the Panther offense finally made a play. On first and 10 from the TA 44-yard line, running back Mark Coley broke through the SA defensive line and scampered 56 yards for a touchdown. The extra point was good and just like that, the Raiders’ lead was cut in half at 14-7 with a little over three minutes left in the game.

The Raiders would need to get some first downs to run the clock out for the victory.

With 1:31 to play, TA head coach and former Americus-Sumter head coach Erik Soliday called a time out in hopes that his defense could make a stop. However, on second and six from the TA 43, McCain broke through the TA defensive line and ran the ball 13 yards for a first down. At that point, the Raiders were able to run out the clock to seal the hard-earned victory on Senior Night.

Now that the regular season is over, it’s playoff time for the Raiders. They will host the first round of the GISA Class AAA State Playoffs next Friday night, November 15, against Frederica Academy. Kickoff is scheduled for 7:30 p.m.