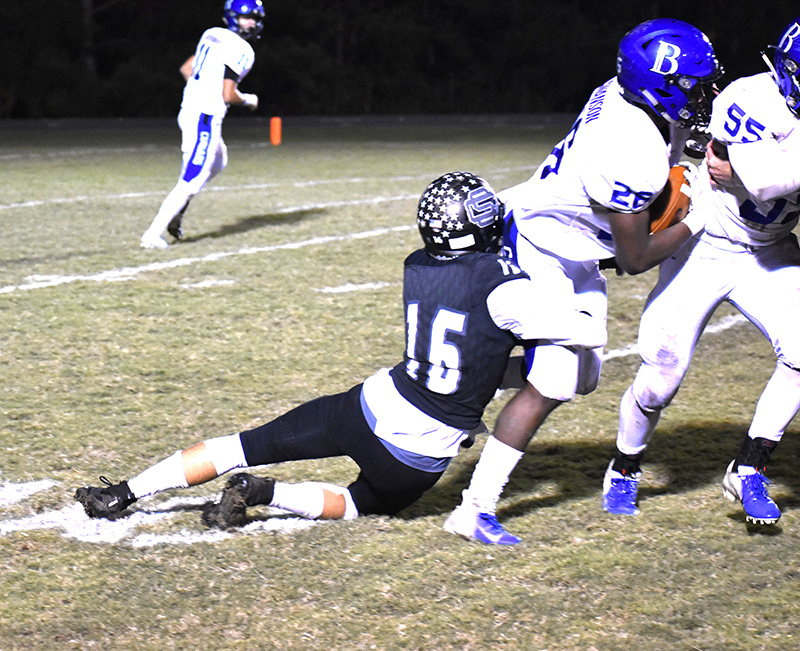 With the win, the Wildcats finish the regular season at 6-4 overall.

The Wildcats opened the scoring with 1:49 left in the first quarter when running back Trent Bivins scored on a 42-yard rushing touchdown. The extra point by DeMarkis Clark was no good, but SC had an early 6-0 lead.

Then with 26 seconds left in the first quarter, the Wildcats added to their lead when SC inside linebacker Jacob Long intercepted a pass and ran it back 35 yards for a touchdown. Running back Zamon Ross scored the two-point conversion and the Wildcats were up 14-0.

Schley County senior quarterback Garrett Peavy (14), playing as a defensive back, tries to chase down a Brookstone wide receiver.
Photo by Sheila DeVane

In the second quarter, Bivins scored his second touchdown of the night on an 18-yard run. The two-point conversion was scored by Zykevious Walker to increase the Wildcats’ lead to 22-0 with 4:29 left in the first half.

With just seconds before halftime, BS tried a 40-yard field goal, but it was unsuccessful. The Wildcats went into halftime up 22-0.

SC got one last touchdown in the third quarter when running back Landon Dailey scored from two yards out. The extra point attempt by William Blackwell was no good, but the Wildcats went on to win 28-0.

Bivins led the Wildcat offense by rushing for 100 yards on 12 carries and scored two rushing touchdowns.

Defensive end Zykevious Walker helped lead the SC defense by tallying eight tackles, two sacks and four tackles for loss. Jacob Long had 15 tackles on the night, including two tackles for a loss and a pick six (interception return for a touchdown).

The Wildcats have qualified for the GHSA Class A-Public State Playoffs, but as of right now, do not know who or where they will be playing. According to SC head coach Darren Alford, all of that will be determined based on where the Wildcats end up in the power rankings. They are expecting to find out on Saturday, November 9.