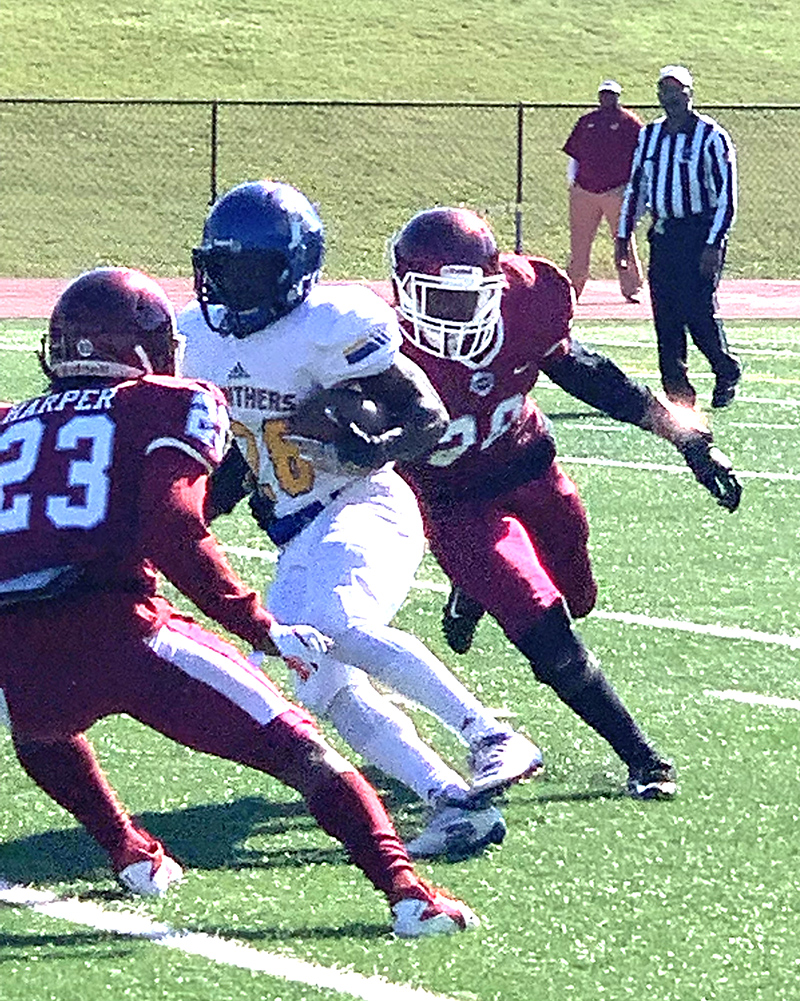 Americus-Sumter running back Christian Waymon catches a pass out of the backfield and fights for yardage. Photo by Ken Gustafson

COLUMBUS, GA – After their wild 58-45 win over Westover in Albany last Friday to clinch a berth in the state playoffs, the Americus-Sumter High School football team (ASHS) came into Kinnett Stadium in Columbus Saturday morning hoping to hand the undefeated Tigers of Carver-Columbus (CC) their first loss of the season. However, the Panthers were unable to capitalize on a golden opportunity to score in the second half and struggled to stop the CC offense. As a result, ASHS fell to the Tigers 36-27 on Saturday, November 9.

With the loss, the Panthers drop to 5-5 overall and 5-3 in the Region 1-AAAA standings. More importantly, they move into a tie for third place in the region with Hardaway at 5-3, but since the Hawks defeated the Panthers 20-14 in overtime back on September 27, they win the tiebreaker over ASHS and the Panthers will be the #4 seed out of Region 1-AAAA. They will travel to Waynesboro, GA to take on Burke County, the #1 seed out of Region 3-AAAA, on Friday, November 15, in the first round of the Georgia High School Association (GHSA) Class AAAA State Playoffs.

CC finishes the regular season as region champions with an overall record of 9-1 and 8-0 in Region 1-AAAA. 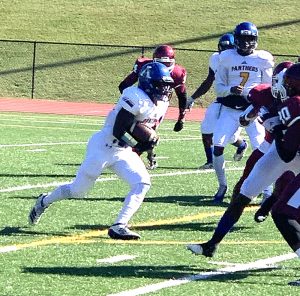 Americus-Sumter running back Christian Waymon fights for yardage on the ground.
Photo by Ken Gustafson

The Tigers opened the scoring in the first quarter when quarterback Devin Riles threw a short pass to Richard Nelson, who broke free and ran the ball 75 yards for the game’s first touchdown. They failed on the two-point conversion attempt, but had an early 6-0 lead.

The Panthers were trying to get a drive going when running back Dykameron Lamons fumbled the ball and the Tigers recovered it. CC would then capitalize on the turnover as Riles ran a quarterback keeper all the way down inside the ASHS 10-yard line. A couple of plays later, Riles scored on another quarterback keeper. This time, the Tigers were able to score the two-point conversion to increase their lead to 14-0.

However, shortly before the first half ended, the Panthers were able to mount an 80-yard, five-play drive, which resulted in a touchdown pass thrown by quarterback Kanova Willoughby to Michael Johnson. They were unable to convert the two-point conversion, but the Panthers were on the board, trailing 14-6 at the half. 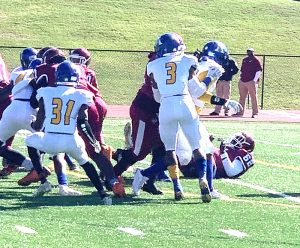 ASHS outside linebacker A.J. Stokes (3) and defensive back Breylon Green (31) fight to get into the CC backfield to make a play.
Photo by Ken Gustafson

ASHS got the ball to start the second half and took advantage right away. Trevian Thomas ran the kickoff all the way back for a touchdown. The Panthers tried to go for two and succeeded when Willoughby threw a pass to Christian Waymon. However, the play was nullified due to a penalty on the Panthers. They tried the two-point conversion again, but Willoughby’s pass to Johnson in the end zone was knocked away by CC cornerback Ja’corey Harper.

Then with 2:11 left in the third quarter, the Panthers took the lead when Willoughby found a wide-open Terquavian Harper in the end zone for a 37-yard touchdown pass. The extra point by Alexis Vasquez was good and ASHS had a 19-14 lead with just over two minutes remaining in the third quarter. 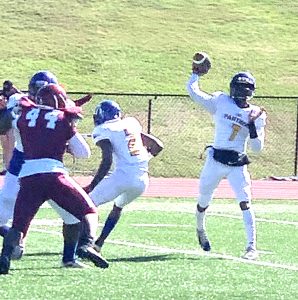 However, the Tigers struck back with a drive of their own, as Riles was able to run a quarterback keeper all the way down to the ASHS seven-yard line. Then on first and goal from the seven, running back Khiari McCoy scored a rushing touchdown. The two-point conversion was good and CC was back in front 22-19 to begin the fourth quarter.

The ASHS offense was able to strike back as Willoughby completed a long pass to Johnson, who fumbled the ball. However, the ball was recovered at the one-yard line by Harper, setting up a golden opportunity for the Panthers to score and take the lead. However, on first and goal from the one, Lamons was stopped and pushed back by the Tiger defense. On second and goal, Willoughby’s pass into the end zone was incomplete. Then on third and goal, Willoughby tried a quarterback keeper, but was run out of bounds near the 10-yard line. This forced the Panthers into a fourth and goal situation. They decided to try a short field goal, but Vasquez’s kick was wide right. The Panthers had the ball at the one-yard line, but came away empty. 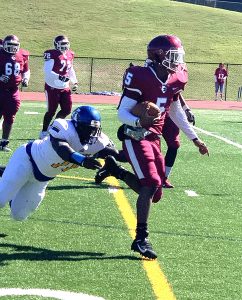 They would have another chance to score when the ASHS defense recovered a fumble on the Tigers’ next possession. However, on third down and 10, Willoughby’s pass was intercepted by defensive end Keandre Harper.

The Tigers capitalized on the turnover when McCoy scored another rushing touchdown. The two-point attempt was good and CC led 30-19. 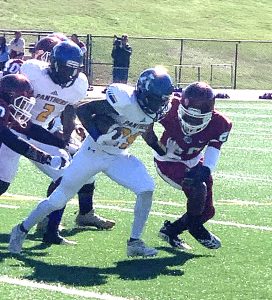 ASHS running back Kylen Carter fights for yardage against the Carver-Columbus defense.
Photo by Ken Gustafson

CC added to their lead in the waning minutes of the game when McCoy scored his third rushing touchdown of the game from seven yards out.

However, the Panthers did not quit. Thomas ran back an 89-yard kickoff return down to the CC 11-yard line. A couple of plays later, Willoughby completed a touchdown pass to Kadarrius King. He then ran the ball in for the two-point conversion to bring the Panthers to within nine at 36-27. However, it was to little, too late as the Tigers went on to win and finish the regular season as the Region !-AAAA champions.

The Panthers will take on the Bears of Burke County in the first round of the GHSA Class AAAA State Playoffs on Friday, November 15. Kickoff from Thomson High School is scheduled for 7:30 p.m.