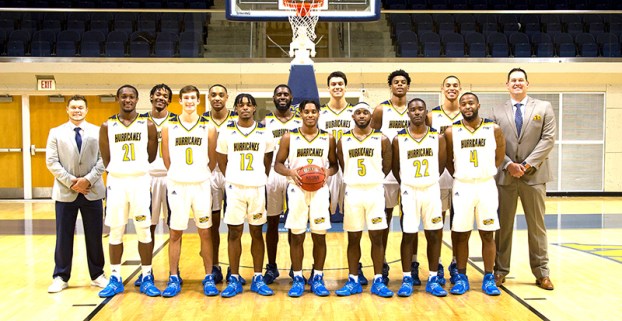 The 2019-20 GSW men’s basketball team got the season off to a good start when they defeated Fort Valley State 72-68 to give new head coach Aaron Coombs his first victory at GSW. Photo by Arthur Thompson

It was the coaching debut of first-year head coach Aaron Coombs.

Neither side could get any separation in the first half. After three ties and seven lead changes, FVSU opened up a 27-20 lead with 6:31 to go before halftime. That was the Wildcats’ largest lead of the game. However, the Hurricanes were able to pull within two by the 3:19 mark and trailed 34-32 at halftime.

Both teams were unable to score during the first three minutes of the second half. Dean eventually knocked down the first basket of the second half with 16:55 to go. Following a basket by the Wildcats, Dean scored again to tie the game at 36-36. That began an 8-0 run by the Hurricanes. GSW senior Abdul Dial sank two free throws with 15:02 to play. From that point on, they never trailed again.

By the 8:06 mark of the second half, the Hurricanes led by 11 points, but had to hold on as the Wildcats chipped away at the lead. FVSU eventually pulled to within two points with three seconds remaining before GSW junior guard Solomon Thomas hit two free throws to seal the victory.

The Hurricanes missed all seven of their three-point attempts in the first half and were 1 for 11 for the game. However, GSW made adjustments at halftime and took its offensive attack inside the arc, where they shot 52.4 percent (11 of 21) over the final 20 minutes. FVSU dished out more assists than did the Hurricanes (14-11) and made more three-pointers. However, GSW outrebounded the Wildcats 42-37 and scored more points in the paint (46-34).

Dean led the Hurricanes in scoring with 19 points and grabbed 15 rebounds. Junior Jalen Cameron played 35 minutes off the bench after an early injury to starting forward Baris Ulker. Cameron made the most of his opportunity by hitting 5 of 9 shots and making 7 of 11 free throws for a total of 17 points. Dial added 13 points and seven rebounds, while Thomas chipped in 12 points.

Up next for the Hurricanes is their home opener against Middle Georgia State on Saturday, November 16, at 7:30 p.m.