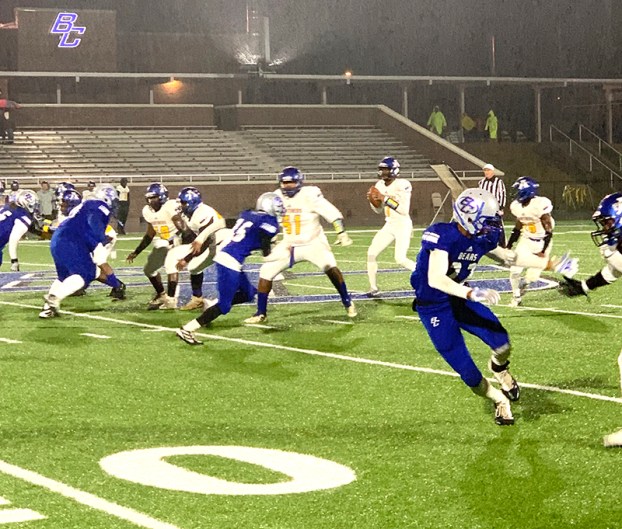 Americus-Sumter quarterback Kanova Willoughby is back to pass against Burke County. Photo by Ken Gustafson

WAYNESBORO, GA – It was a cold, wet, rainy night in Waynesboro, GA. However, it turned out to be a hot night of celebration for the #4 seeded Americus-Sumter High School football team (ASHS) as they were able to force #1 seeded Burke County (8-3) into committing five turnovers. As a result, the Panthers (6-5) were able to deliver first-year head coach Ross Couch a 13-6 upset victory over the Bears in the first round of the GHSA Class AAAA State Playoffs on Friday, November 15, at Burke County High School (BC).

While the offense generated enough points for the win, the ASHS defense came up with big plays the entire game. 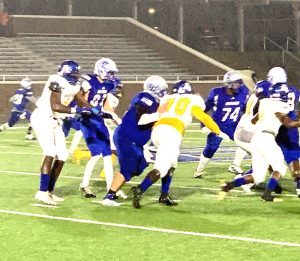 Americus-Sumter’s Tytravion Benn (70) tries to get into the BC offensive backfield to make a play.
Photo by Ken Gustafson

The Panthers won the toss, but elected to defer until the second half. Both teams struggled offensively in their first possessions. In fact, the ASHS defense forced and recovered a fumble early in the game as the Bears seemed to have more difficulty in the cold, rainy conditions.

Midway through the first quarter, the Panther defense forced BC to punt, but the punter mishandled the snap and the ball was recovered by the Panthers in BC territory. ASHS had a chance to score an early touchdown, but were forced to attempt a 34-yard field goal. The field goal by Alexis Vasquez was good and the Panthers had a 3-0 lead with 5:07 to go in the first quarter. 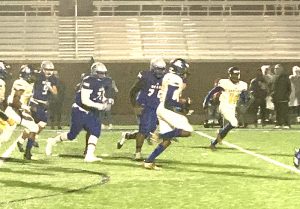 The Bears were able to get a long kickoff return by Marquise Burnett that went deep into ASHS territory. The BC offense was able to move the ball down to the ASHS 15-yard line. However, on third down and eight from the ASHS 15, Quay Harper was able to intercept a pass and ran the ball all the way back to the BC 32-yard line. Then on third and 11 from the BC 32, ASHS quarterback Kanova Willoughby threw a 32-yard touchdown pass to Quevoluia Willoughby. The extra point by Vasquez was good, giving the Panthers a 10-0 lead.

The Panther defense was able to force and recover another fumble by the Bears. This enabled them to move the ball down inside the BC 10-yard line. However, the ASHS 0ffense had difficulty handling the football and were forced to attempt another field goal. However, this time, Vasquez’s kick was wide right and the score remained 10-0 ASHS. 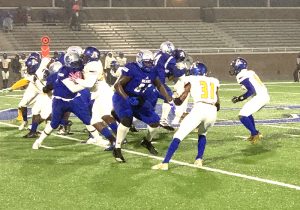 The Bears responded with a drive of their own and capped it off with a touchdown on a quarterback keeper by Michael Johnson. They decided to go for two points, but Johnson was pushed out of bounds just shy of the goal line. Both teams would get out of the cold, rainy conditions at the half, but the Panthers had a 10-6 lead.

The wet weather affected both teams, but it affected BC even more. The Panther defense was able to force four turnovers from BC in the first half.

With 3:35 left in the third quarter, the Bears moved the ball down deep into the red zone thanks to a long run by Johnson. After three plays, the Bears had the ball fourth and one at the ASHS 16. However, Johnson was able to get the necessary yardage for the first down. However, the Panther defense made three straight stops to force another fourth-down situation for BC at the 15-yard line. Once again, the Panther defense stepped up and made the play as Johnson’s pass was incomplete and the ball was turned over to the Panthers on downs. 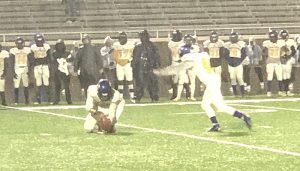 ASHS took advantage on offense as running back Christian Waymon ran the ball all the way down inside the Bears’ 20-yard line.  A horse collar penalty on BC moved the ball down to the eight-yard line, giving the Panthers a golden opportunity to score. Willoughby threw a 15-yard pass to Quay Harper in the end zone, but the senior wide receiver wasn’t able to bring it in. As a result, the Panthers had to settle for a field goal by Vasquez. That completed a six-play, 85-yard drive by ASHS. The score was 13-6 with 10:57 left in the game.

On the Bears’ next possession, the Panther defense came up big once again and forced BC to punt. However, the Panthers fumbled the football and it was recovered by the Bears at the ASHS 36-yard line. However, once again, the ASHS defense came up big. On fourth down, Johnson threw a pass down near the end zone, but it was knocked away by Trevian Thomas of ASHS. With a little over seven minutes to go, the Panthers had the ball with a chance to put together a drive and run time off the clock. 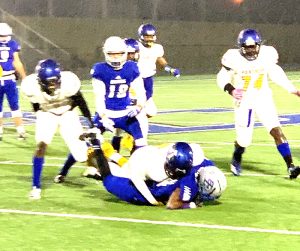 On the Panthers’ next possession, Willoughby was sacked for a big loss, but on second and 28, Waymon broke through the BC defensive line and ran the ball down to the Bears’ 24-yard line. However, a penalty moved the ball back to the BC 40.

In spite of some strong running by Waymon, the Panthers were forced into a fourth-down situation and turned to Vasquez for a 37-yard field goal. However, the snap was bobbled and the ball was recovered by the Bears. With less than four minutes left, BC would get perhaps one last chance to tie or win the game.

The Panther defense was able to hold the Bears on their next possession and got the ball back. However, the Panthers were not able mount a drive and were forced to punt.

With 1:07 left to play, the Bears would have yet another chance to tie or win the game. However, as they did all night, the ASHS defense came up huge again. With less than 30 seconds left, Johnson fumbled the ball and it was recovered by the Panthers at the BC 36 yard line. Willoughby took a knee to run out the clock and the Panthers left Waynesboro with a 13-6 victory.

ASHS will advance to the second round and will travel to Newnan, GA to play Sandy Creek next Friday night, November 22. Kickoff is scheduled for 7:30 p.m.