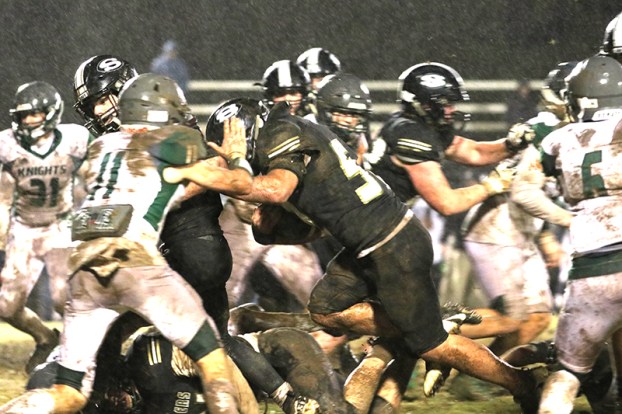 Southland Academy running back Hunter McCain fights for yardage against the Knights of Frederica Academy. McCain scored one rushing touchdown in the Raiders' win. Photo by Sherry Bass

AMERICUS – The Southland Academy Raiders (SA) began their post-season drive to a state championship on a positive note as they were able to stifle the offense of Frederica Academy (FA) on their way to an 22-6 victory in the first round of the Georgia Independent School Association (GISA) Class AAA State Playoffs on Friday, November 15, at Southland Academy.

This was a game that was dominated by the SA defense. They were able to put the Raider offense into positions to score and kept the Frederica offense at bay for most of the night. The game was also a game of field position and ball control in wet weather conditions. 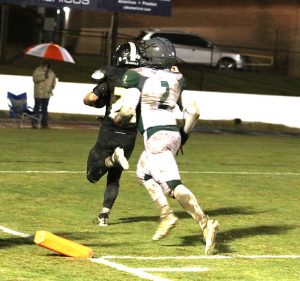 The Raiders opened the scoring with 7:20 to go in the second quarter. Running back Clay Owens scored a rushing touchdown on a 22-yard run. Quarterback Landon Law was the holder on the extra point attempt, but instead of holding on the extra point, Law ran the ball towards the goal line and scored a two-point conversion to give the Raiders an 8-0 lead. The SA defense was able to hold the Knights on their next possession and the Raiders went into halftime leading 8-0.

The field conditions at Harvey Simpson Stadium worsened as the rain continued to soak the field. FA kicked off to the Raiders to start the second half. It was imperative for the SA offense to protect the football in these difficult conditions. As a result, ball control became the most important factor in the close contest. 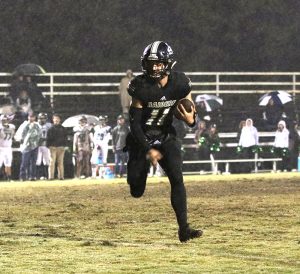 Southland Academy quarterback Landon Law runs the ball in for a two-point conversion in the Raiders’ 22-6 playoff win over Frederica Academy.
Photo by Sherry Bass

SA added to its lead when Hunter McCain scored a rushing touchdown from one yard out to cap off a long, time-consuming drive. The extra point by Caleb Law was good and the Raiders enjoyed a 15-0 lead.

Down by two scores, the Knights decided to throw the ball on their next possession. However, that decision proved to be costly. SA cornerback Adam Smith deflected a pass that was intercepted by Luke Law. Law then ran the ball 21 yards the other way for a Raider touchdown. The extra point by Caleb Law was good and the Raiders had a 22-0 lead.

The Knights were able to score a late touchdown when running back Kyle Perez scored from 10 yards out with less than three minutes left in the game. However, it was too little, too late for FA as the Raiders won the contest 22-6.

The Raiders (7-4) will travel to Milledgeville, GA next Friday, November 22, to take on the undefeated Trojans of John Milledge Academy (10-0) in the second round of the playoffs. Kickoff is scheduled for 7:30 p.m.

WAYNESBORO, GA – It was a cold, wet, rainy night in Waynesboro, GA. However, it turned out to be... read more