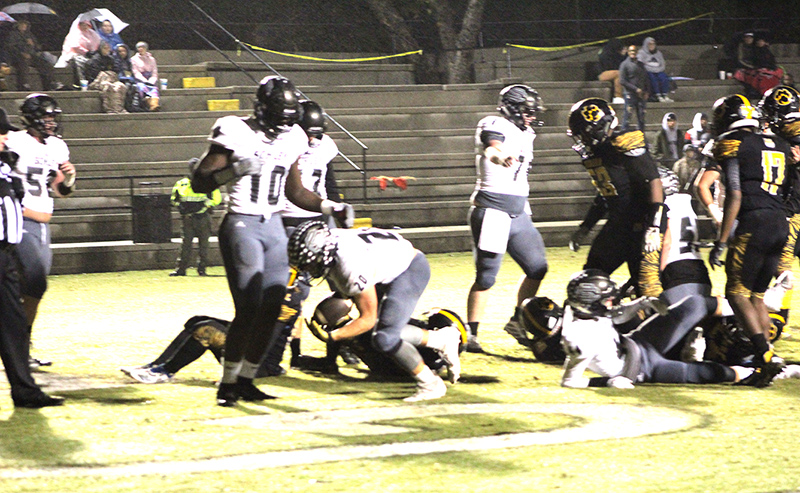 Schley County senior running back Trent Bivins (20) scored three rushing touchdowns to lead the Wildcats to a 46-24 victory over Claxton in the first round of the GHSA Class A-Public State Playoffs. Photo by Sheila DeVane

CLAXTON, GA – Schley County (SC) senior running back Trent Bivins rushed for 76 yards on 16 carries and scored three rushing touchdowns to lead the Wildcats (7-4) to a 46-24 victory over Claxton in the first round of the Georgia High School Association (GHSA) Class A-Public State Playoffs on Friday, November 15, at Claxton High School (CHS).

The Tigers took an early lead with 11:43 left in the first quarter. Quarterback Hayden Morris threw a 63-yard touchdown pass to Shakari Denson. The extra point by Johnofer Carter was good, giving CHS a 7-0 lead.

However, the Wildcats exploded with 23 points in the second quarter. SC was able to move the ball all the way down to the CHS one-yard line. Then Bivins scored his first touchdown on a one-yard run. The extra point by Aaron Pinckard was good, tying the game at 7-7 with 9:16 left in the half. 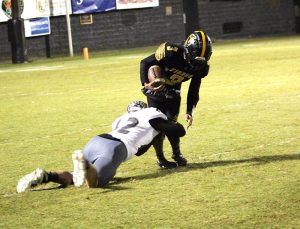 The Wildcats took the lead almost four minutes later when Ross scored a touchdown on a 12-yard run. Bivins was able to score the two-point conversion to give SC a 15-7 lead with 5:40 to go before halftime.

The Tigers responded when Morris threw a 35-yard touchdown pass to Karon Taylor. Morris then completed a short pass to Denson to get the two-point conversion. With 4:42 to go before halftime, the score was tied 15-15.

However, the Wildcats fought back as Bivins scored the second of his three touchdowns on a three-yard run. Ross then converted the two-point conversion to give SC a 23-15 lead at the half.

The Wildcats added to their lead with 10:06 left in the third quarter. Senior quarterback Garrett Peavy completed a 50-yard touchdown pass to Ross. Bivins was able to score the two-point conversion to increase the Wildcats’ lead to 31-15. 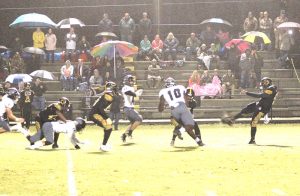 CHS cut the Wildcats’ lead to 13 points when Jorge Gonzalez kicked an 18-yard field goal with 8:44 to go in the third quarter. However, early in the fourth quarter, the Wildcats struck again by moving the ball down to the CHS three-yard line. Bivins then scored his third touchdown of the night on a three-yard run. Bivins followed that up by completing the two-point conversion to increase the SC lead to 39-18 with 11:13 left in the game.

The Wildcats added to their lead with 4:12 left when Renfroe scored a one-yard rushing touchdown. Pinckard’s extra point was good and the Wildcats had a 46-18 lead. The Tigers got a last-second cosmetic touchdown when Morris completed a 13-yard pass to Denson, but the Wildcats would leave Claxton with a 46-24 playoff win.

With the Wildcats having a strong running attack, Peavy didn’t have to throw many passes. He was 3 for 5 for 104 yards with one touchdown pass and two interceptions.

The Wildcats also got it done on the defensive side of the ball and on special teams. The SC defense tallied five sacks and the special teams unit had a total of three blocked punts. Junior Jarrett Long blocked two punts and senior Zykevious Walker had one. Junior Josh Brown led the SC defense with two sacks.