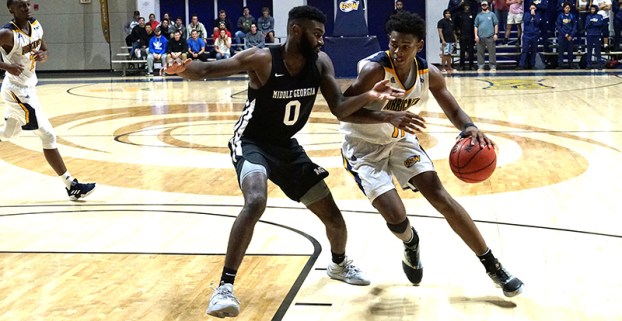 Dean and Cameron post double-doubles to lead Hurricanes past MGS

The Hurricanes are now 2-0 to start the season.

During the first half, there were six lead changes. The Knights held their largest lead of the half at 20-14 with 11:02 to go. MGS maintained a six-point lead for the following three minutes until Solomon Thomas nailed a three-pointer to spark a 12-0 run by the Hurricanes. From that point on, GSW would not relinquish the lead. The Hurricanes led at halftime 37-28.

Midway through the second half, the Hurricanes led by as many as 13 points with 11: 08 to go, but had to hold off a late push by the Knights. MGS was able to cut the Hurricanes’ lead to 73-68 with 1:49 remaining. However, a dunk by Dean with 23 seconds left was enough to seal the victory for GSW.

The Hurricanes struggled from beyond the arc for the second consecutive game. They made 4 of 17 attempts (23.5 percent). GSW didn’t fair much better from the foul line. They made only 9 of 20 foul shots (45 percent), but out rebounded MGS 51-36. They also outscored MGS in points in the paint (50-28) and dished out more assists (18-9).

MGS (4-4) was led in scoring by Anthony Edwards with 19 points. His teammate, Michael Graham, scored 16 points and grabbed eight rebounds.

The Hurricanes will try to stay undefeated when they host Albany State on Monday, November 18, at 7:30 p.m.

From Staff Reports   AMERICUS – The Southland Academy Raiders (SA) began their post-season drive to a state championship on... read more