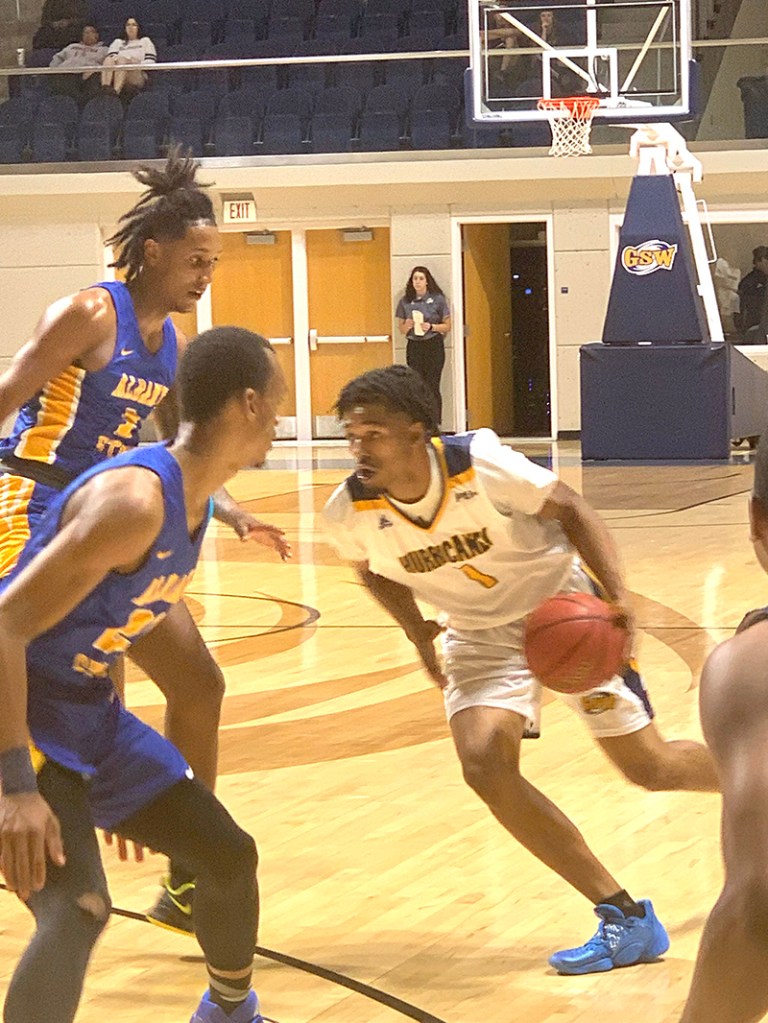 AMERICUS – Behind sophomore forward Jamari Dean’s third straight double double of the season, the Georgia Southwestern State University men’s basketball team (GSW) was able to pull out a hard-fought 75-66 victory over the Golden Rams of Albany State on Monday evening, November 18, in front of a raucous crowd at the GSW Storm Dome.

This year, GSW moved some of the bleachers courtside so that the students could be right on top of the action and so that they can have an impact.

GSW head coach Aaron Coombs was extremely proud of both his team and the fans that came out to support the Hurricanes.

“I’ve got fighters. When you have fighters, good things are going to happen. I’m so proud of our guys right now,” Coombs said. “Great fans…unbelievable student section. We have an unbelievable home-court advantage.” 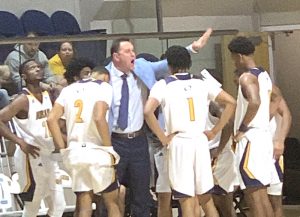 GSW head coach Aaron Coombs coaches up his team during a timeout.
Photo by Ken Gustafson

As he has done during the past two games, Dean brought his workman-like attitude to the floor against the Golden Rams. The Ellenwood, GA native led the Hurricanes with 18 points and hauled down 16 rebounds for his third consecutive double double of the season. “It was a great game. We started off slow, but we battled back and we fought adversity throughout the game and we came to win,” Dean said.

Three other Hurricanes scored in double figures. Solomon Thomas scored 17 points on 6 for 14 shooting and both Jalen Cameron and Abdul Dial each scored 16. Devon Higgs nearly had a double double for the Hurricanes. Higgs scored eight points and pulled down nine rebounds in the winning cause. 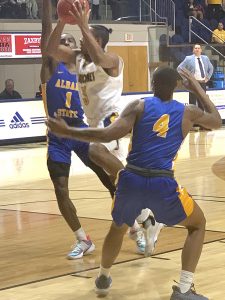 GSW junior guard Solomon Thomas drives towards to the basket. Thomas scored 17 points in the win over ASU.
Photo by Ken Gustafson

The Golden Rams jumped out to a 9-0 lead, capped off by a three-pointer by Joshua Jerome. The Hurricanes finally got on the board when Thomas drove to the basket and scored. That began a 7-2 run by GSW to cut the Golden Rams’ lead to 11-9 with a little over 14 minutes left in the first half.

ASU responded with a 6-0 run of their own, capped off with a basket by Napoleon Harris. By the 11:24 mark of the first half, the Hurricanes were trailing 17-9. 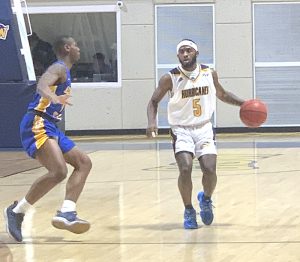 GSW junior point guard Kahlon Whitley had five assists on the night in the win over ASU.
Photo by Ken Gustafson

GSW ended its scoring drought when Cameron sank two free throws. However, the Golden Rams struck back when Jamarcis Nunally knocked down a three-pointer to put ASU back up 20-11 Nunally would later hit another three-pointer to give ASU a 23-14 lead. However, over the next couple of minutes, the Hurricanes were able to get some defensive stops and they cut the deficit to 25-22 on a three-pointer by Dial with about five minutes left in the half. ASU answered with four-straight points, but Dial struck again with a two-point shot just before the four-minute media timeout. At this point, the Hurricanes trailed 29-24 with 3:51 to go in the half.

Out of the timeout, Cameron was able to get a basket on the inside to cut the deficit to three. The two teams traded baskets over the next sequence, with Thomas hitting a jumper to keep the Hurricanes within three at 31-28. However, Dial was able to score on the inside to cut the deficit down to 31-30. This prompted ASU head coach Patrick Gayle to call a time out with 1:27 left in the half. The Hurricanes tried to take the lead as the seconds were winding down, but were unable to. Nevertheless, they went into halftime trailing only by three at 33-30. 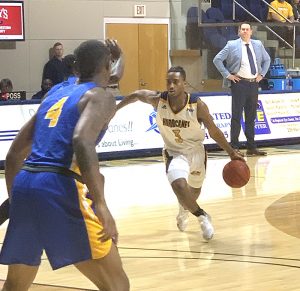 Solomon Thomas (3) looks to drive to the basket.
Photo by Ken Gustafson

During the first three and a half minutes of the second half, both teams struggled to score a lot of points. However, with a little over 16 minutes left in the game. Higgs nailed a three-pointer to bring the Hurricanes to within two at 39-37. Then near the 14-minute mark, Cameron was able to score to tie the game at 41-41.

Dean then gave the Hurricanes their first lead of the game when he scored on the inside and was fouled. Dean converted the free throw and GSW led 44-41, but the Golden Rams scored a basket just before the first media timeout.

Out of the timeout, The Hurricanes extended their lead to 46-43 when Thomas drove to the basket and scored on a layup.

However, the Golden Rams went on a 9-2 run to take a 52-48 lead with 11:40 to go before timeout was called. Out of the timeout, Higgs nailed a three-pointer, electrifying the already amped-up crowd and cutting the deficit to 52-51. Then on GSW’s next possession, Dean scored on a dunk to give GSW the lead at 53-52.

After the Golden Rams tied the game on a free throw, Dean scored another basket on the inside to give the Rams a 55-53 lead. For the rest of the way, both teams would fight toe to toe, much like to heavyweights in a boxing match. From this point on, however, the Hurricanes did not relinquish their lead. 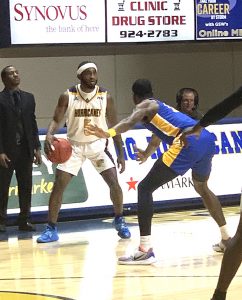 GSW point guard Kahlon Whitley advances the ball up the court to set up the Hurricanes’ offense.
Photo by Ken Gustafson

With 8:51 to go, Dial was fouled while shooting and made one of two free throws, giving the Hurricanes a 56-53 lead. ASU had a chance to cut into the lead when Napoleon Harris was fouled, but Harris missed both free throws. Missed free throws were a huge problem for the Golden Rams. For the game, they made 10 of 24 foul shots.

With less than six minutes to play, GSW had a 60-57 lead before Cameron drove right by his defender and scored to increase the GSW lead to 62-57.

For the next couple of minutes, the Hurricanes’ lead was at five before ASU guard Mario Young scored to cut the lead to 64-61 and was fouled. At this point, ASU called timeout with 3:31 left. Out of the timeout, Young missed the free throw and the Hurricanes had a chance to extend their lead. Dean was fouled in the act of shooting and hit one of two free throws to give GSW a 65-61 lead with a little over three minutes left.

The Hurricanes were able to get a stop on defense, which allowed them to work for a good shot on offense and work time off the clock. Dial was able to score on the inside to give GSW a 67-61 lead with 1:21 left. At that point, ASU called another time out.

The Golden Rams were led in scoring by Randy McClure with 15 points.

GSW will try to stay undefeated when they host former Southland Academy star Siage Batten and the Barons of Brewton-Parker College on Monday, November 25, at 7:30 p.m.