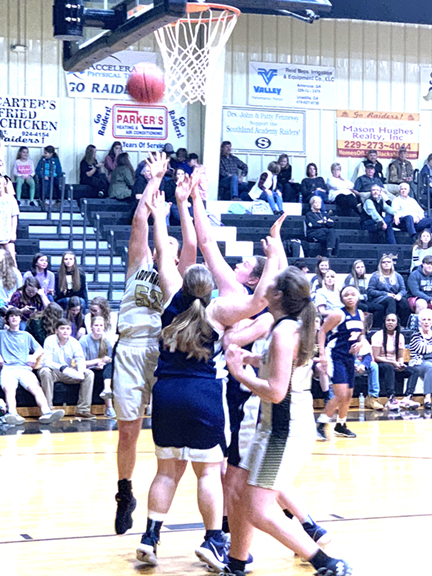 Southland Academy forward Holly McCain (52) goes up for a rebound in a game against Valwood last year. McCain averaged eight points and nine rebounds per game during the 2019-19 season. ATR Archive

AMERICUS – This year’s Southland Academy Lady Raider basketball team (SA) will look a lot different than last year’s team that went 21-5 and went to the GISA Final Four. However, this year’s squad will be no less competitive and will be just as tenacious. They are hungry to repeat the success of last year’s team.

The Lady Raiders are losing a lot of valuable experience from last year’s squad. Sydney Payne, Macy Williams, Calyn Fort, Lauryn Griffin and Laney Griffin have all graduated. Payne was no doubt the catalyst and leader that made the engine go for SA. Payne averaged nine points, three rebounds, two assists and two steals per game to spearhead the Lady Raiders’ attack. Fort was a prolific sharpshooter for SA, leading the Lady Raiders in three-point shooting. She averaged eight points and two rebounds per game. Macy Williams was a force on the inside. Williams averaged nine points, three rebounds and two steals per game. For the Lady Raiders to repeat last year’s success, they will have to get production from some of the returning players to replace the production and leadership from last year. 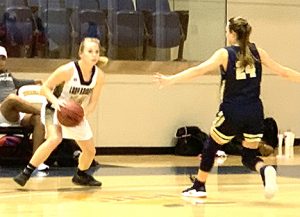 Southland Academy guard Maddie Crisp is seen here with the ball in a game last year. Crisp, along with four other upper classmen, will be counted on to provide leadership for the Lady Raiders this year.
ATR Archive

One of those returning players who will be expected to carry the load is junior forward Holly McCain. As a sophomore last year, McCain averaged eight points, nine rebounds and two steals per game. Being that there will be no seniors on this year’s squad, McCain will be expected to take a greater leadership role as a junior. She will be expected to repeat and perhaps even surpass her production from last year.

Junior Maddie Crisp will also be expected to step up her game and show leadership as an upper classman. Crisp is capable of knocking down outside shots and is a strong defender. In addition to the upper classmen expected to produce, freshmen Morgan Weaver and Riley Mitchell are expected to play a lot and contribute.

The 2019-2020 SA squad will consist of five juniors, four sophomores and three freshmen. Other players, such as Katie Rogers (junior), Reese Roland (junior), Jadie Burrell (sophomore), Emma Kate Hayes (sophomore), Ansley Weldon (sophomore), Brooke Wiesner (sophomore), Haleigh Warren (junior) and Julia Caroline Bailey (freshman) will have to step up their games in order for the Lady Raiders to be successful this year.

After a trip down to Damascus, GA to take on SGA on Tuesday, December 3, the Lady Raiders will play their first home game of the 2019-2020 season against Windsor Academy on Friday, December 6. Tip-off for that game is scheduled for 6 p.m.