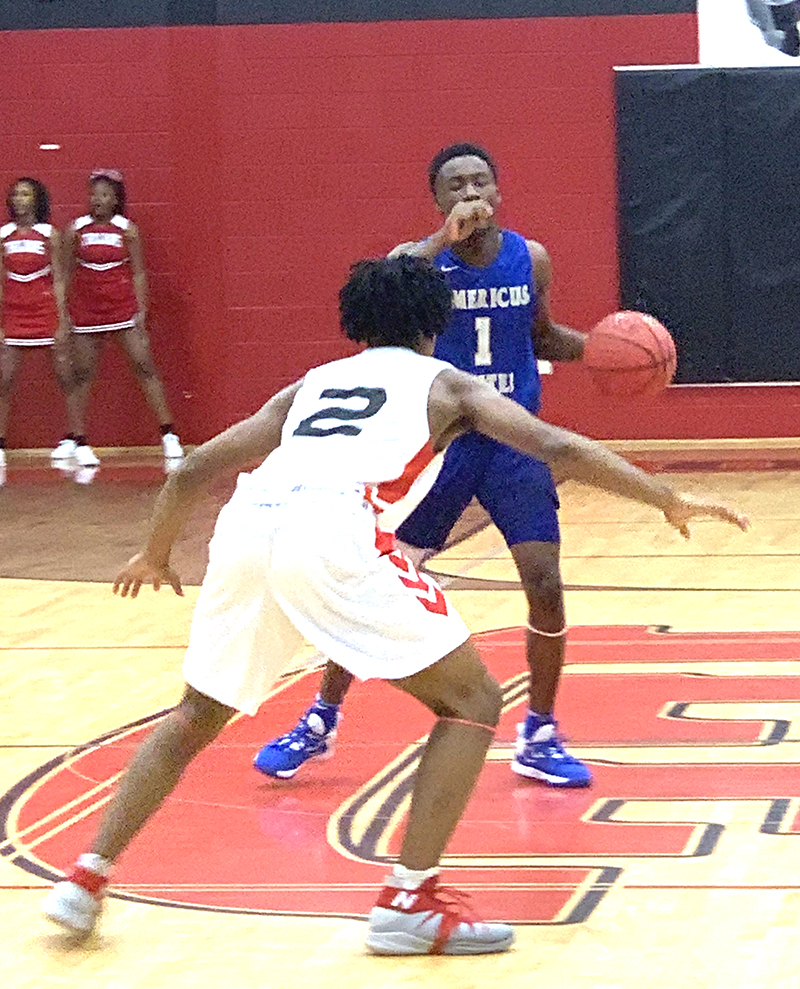 LEESBURG, GA – The boys’ high school basketball game between Americus-Sumter (ASHS) and Lee County (LCHS) was the type of game that one would expect a state championship game to be: two teams battling it out down to the last few seconds with one shot deciding it. The only difference was that it was the first game of the season. The Panthers had a 46-44 lead with 19.2 seconds left in the game before the Trojans’ Nick Dixon nailed a three-pointer to give LCHS a 47-46 lead. However, ASHS would get the final answer as Le’shanna Ross nailed a three-pointer from the corner with 5.4 seconds left to give the Panthers a thrilling 49-47 victory over the Trojans on Saturday, November 23, at Lee County High School. 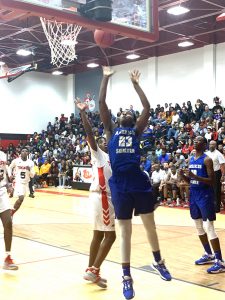 ASHS forward Dariuon Mitchell goes up to score. Mitchell had four points in the win over Lee County.
Photo by Ken Gustafson

This was Genwright’s first win as the new ASHS head coach. He took over for Michael Hoffpauir, who left to take an administrative position and the boys’ basketball head coaching job at Monroe High School in Albany.

Genwright knew that his club would be facing various forms of adversity this season and he wanted them to be prepared for it in advance. In Saturday night’s game, that preparation seemed to have worked. “Last week, I had some guys come out to talk to the team about adversity, like ‘What can they do against adversity’. Le’shanna Ross stepped up and knocked down the big shot right at clutch time,” Genwright said. 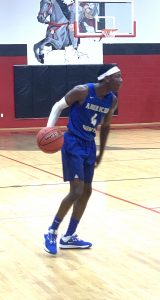 ASHS senior shooting guard Trae Brown led the Panthers in scoring with 14 points. Seven of those points were on free throws as he went 7 for 8 from the foul line. Ross was also in double figures as he scored 12 points.

The first quarter was an evenly-played quarter, with the Trojans leading 11-9 to start the second quarter. ASHS senior guard Milton McCoy scored the first basket of the second quarter with 6:36 to go before halftime to tie the game at 11-11. That was the beginning of a 5-0 run by the Panthers, capped off by a fast-break layup by McCoy. ASHS went on to outscore LCHS 6-2 during the rest of the first half to take a 22-13 halftime lead. 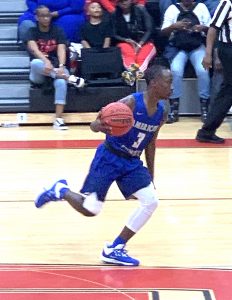 However, the Trojans went on a 9-0 run to start the fourth quarter and were able to get back in the game. During this period, the Panthers were going through a scoring drought that ended when Brown hit two free throws with under five minutes remaining. However, LCHS went on a 7-2 run, capped off by a three-pointer from Damon Favors with less than three minutes to play. The Trojans then pulled to within three at 45-42 on a basket by Kristan Mason. The Panthers’ double-digit lead had evaporated and the game would go down to the wire.

ASHS had a 45-42 lead with 49.7 seconds left before Favors was fouled while shooting and made both free throws to bring the Trojans to within one.

McCoy was then fouled, but made only one of his two foul shots. The Panthers had a 46-44 lead and the stage was set for the dramatic moments of the game’s conclusion.

As the Trojans worked to find the best shot with the seconds ticking down, they found Dixon in the left corner and he buried a three-pointer with 19.2 seconds left, forcing Genwright to call a timeout to set up a game-winning score. Out of the time out, the Panthers worked the ball around the perimeter, trying to find a high-percentage shot. They found Ross in the far right corner and he nailed the winning three-point shot with 5.4 seconds left. The Trojans were able to get off a last-second shot, but it fell short and the Panthers left Leesburg with a dramatic win to start the 2019-2020 season: a 49-47 victory over Lee County.

Both Dixon and Favors led the Trojans in scoring with 17 points. LCHS is now 2-1 on the young season and will face the Panthers again in a rematch at ASHS on Saturday, November 30, at 7:30 p.m.

The Panthers (1-1) will begin Region 1-AAAA play on Tuesday, November 26, when they take on Dougherty in Albany at 7:30 p.m. After a home game against Bainbridge on Friday, November 29, they will face the Trojans of Lee County in a rematch on Saturday, November 30, at 7:30 p.m.