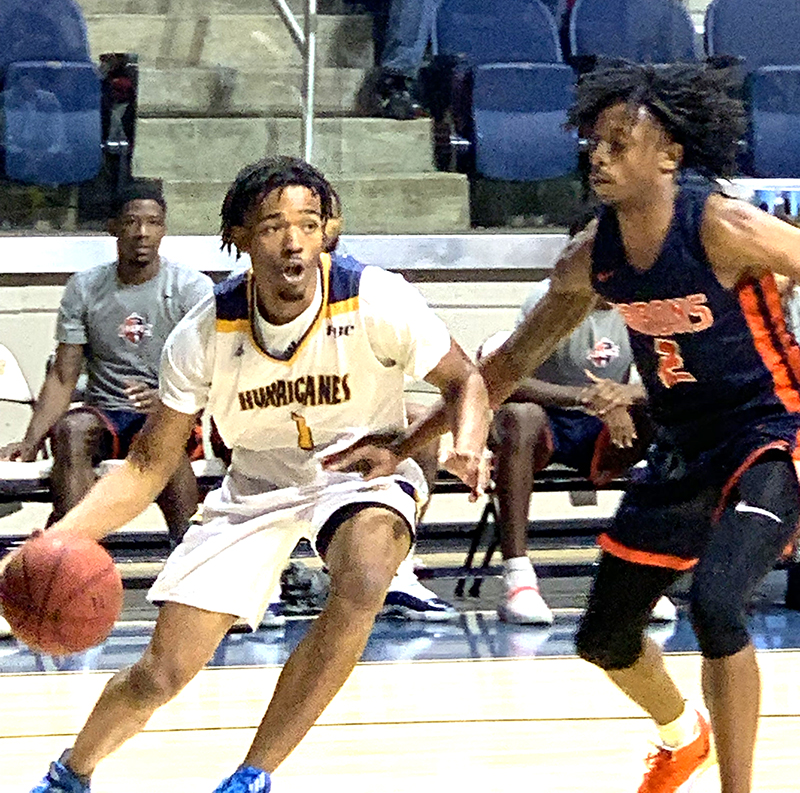 AMERICUS, GA – It was an extremely emotional and memorable Monday night in the GSW Storm Dome as Georgia Southwestern State University (GSW) honored the legendary GSW play-by-play radio broadcaster Ricky Burgess in a special ceremony before the GSW men’s basketball team (4-0) took the floor against the Barons of Brewton-Parker College (BP). The Hurricanes made it even more memorable as GSW guard Solomon Thomas scored 35 points on 11-16 shooting and grabbed six rebounds to lead the Hurricanes to a 98-76 victory over the Barons (4-7).

The Hurricanes shot 8-19 from beyond the arc for the game and Thomas scored six of those three-pointers.

It was also a homecoming of sorts for two BP players. Sophomore guard Jamarcus Scott, who played for his father Ernest Scott at Schley County, led the Barons in scoring with 17 points. Sophomore guard Siage Batten, a former Southland Academy standout, also finished in double figures with 13 points. 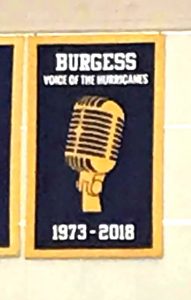 The Ricky Burgess banner was unveiled during a special ceremony before GSW’s game against Brewton-Parker to honor the late Ricky Burgess: the legendary GSW play-by-play radio broadcaster who called GSW sporting events and area high school events for 45 years.
Photo by Ken Gustafson

In addition to Thomas’s high scoring, four other Hurricanes scored in double figures. Jalen Cameron scored 17 points on 6 of 12 shooting and Jamari Dean posted another double-double, scoring 13 points and grabbing 15 rebounds. Abdul Dial and Keshawn Gibbs each poured in 12 points in the winning cause. 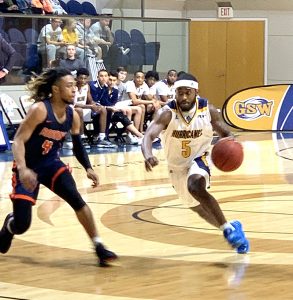 The Barons responded with a 13-6 run to cut the Hurricanes’ lead to five, but GSW responded with a mini run of their own, capped off with a reverse layup by Devon Higgs. Dial would later hit another three-pointer with less then three minutes to go to give the Hurricanes a 44-35 lead. Then with 1:42 to go in the first half, Keshawn Gibbs was fouled and made both free throws to increase the GSW lead to 11 at 46-35. However, the Barons cut the lead to eight on a three-pointer by Devan Brigs-White. By halftime, the Hurricanes had an eight-point lead at 48-40. 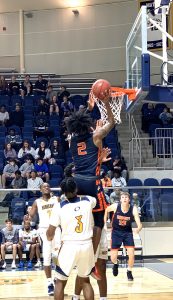 Brewton-Parker guard and former Southland Academy star Siage Batten (2) goes up for a layup against the Hurricanes. Batten scored 13 points against GSW.
Photo by Ken Gustafson

A minute into the second half, BP’s Jack Gray nailed a short jumper to cut the Hurricanes’ lead to six. A couple of minutes later, Batten had the ball for the Barons and got away with a walking violation. The violation was not called, which infuriated Coombs. Coombs was assessed a technical foul and the Barons were able to pull to within three points at 49-46. However, the Hurricanes scored four unanswered points, including two free throws by Thomas, to take a 53-46 lead. A minute or so later, Thomas drained a three-pointer with 16:30 to go in the game to give GSW a 58-48 lead. 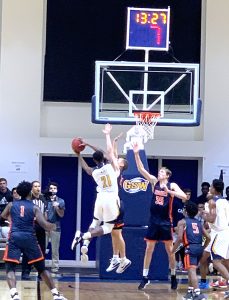 GSW senior guard Abdul dial tries to score against the BP defense. Dial scored 12 points in the win over the Barons.
Photo by Ken Gustafson

For the next three minutes, both teams went scoreless until Dean was fouled and made both free throws to give GSW a 61-49 lead. Thomas then scored a fast-break layup to increase the Hurricanes’ lead to 14 before Scott scored at the other end for the Barons. By the 11:53 mark of the second half, the Hurricanes led 63-51 when timeout was called.

Out of the timeout, the Hurricanes went on a full-court press, but the Barons were able to get a jumper from Scott to cut their deficit to 10 at 63-53. However, Thomas capped off a 5-0 run by GSW on a three-pointer, increasing GSW’s lead to 15 points.

However, Gray knocked down a three-pointer to bring the Barons back to within 11 at 70-59. 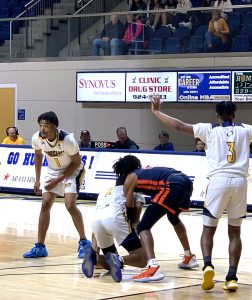 With a little less than eight minutes to play, however, Thomas struck again to give the Hurricanes a 75-62 lead. Both teams trade baskets before timeout was called with 7:33 to go. At that point, the Hurricanes led 77-66.

Out of the timeout, the Hurricanes went on an 8-1 run, which was capped off by a basket from Dean. Dean struck again with less than five minutes to play with another three-pointer to increase the GSW lead to 20 at 88-68. At this point, the Hurricanes had total control of the game. They continued to pressure the ball, generated turnovers and increased their lead to as much as 23 on a basket by Higgs. 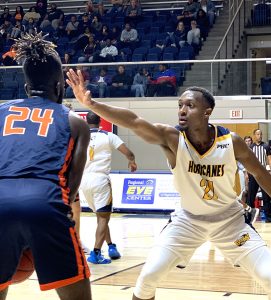 For the game, GSW shot 31 for 63 from the field and 8 for 19 from beyond the arc. They were also proficient from the charity stripe, making 28-36 free throws.

The Hurricanes will try to stay undefeated when they host Fort Valley State on Monday, December 2. Tip-off is scheduled for 7:30 p.m.