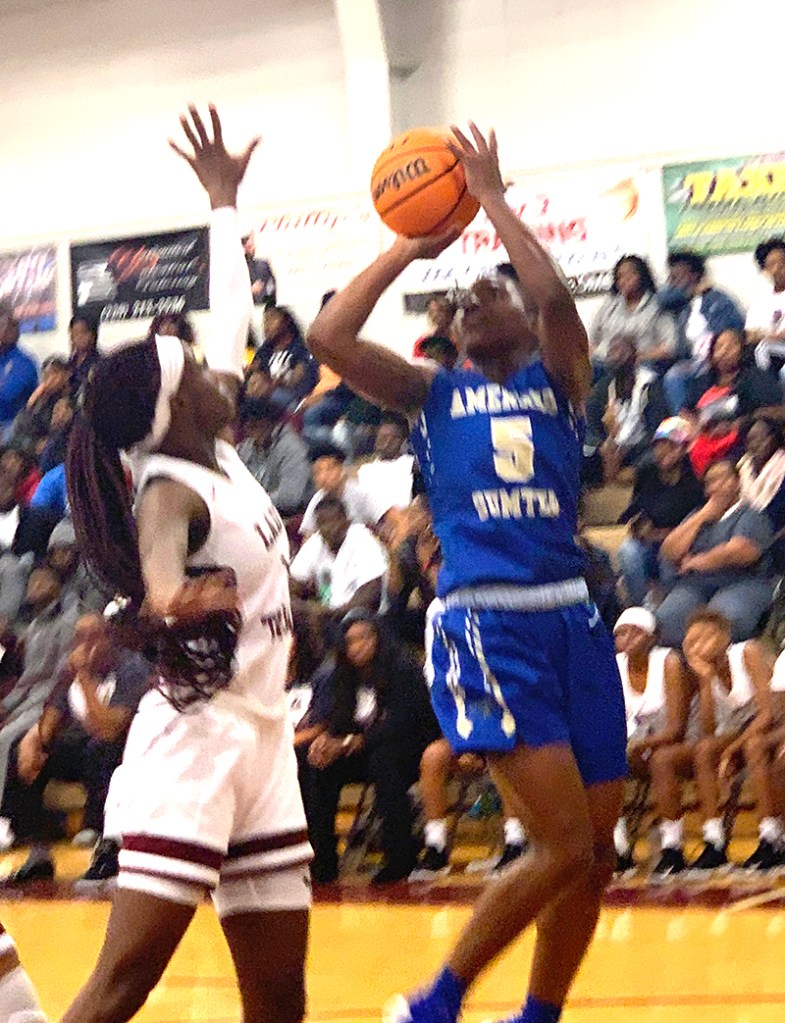 Americus-Sumter senior guard Jelissa Reese is about to take a shot. Reese scored 27 points in the Lady Panthers’ 72-31 win over Dougherty. Photo by Ken Gustafson

ALBANY, GA – After defeating Harrison High School 64-39 in the Parkview Thanksgiving Tournament in Lilburn, GA on Monday, the Americus-Sumter girls’ basketball team (3-0, 1-0) rolled into Albany on Tuesday, November 26, and rolled over Dougherty Comprehensive High School (DCHS) 72-31 in their first Region 1-AAAA contest of the season.

ASHS guards Trinity Jones and Jelissa Reese both nearly scored 30 points each in the contest. Jones led all scorers with 28 points, while Reese poured in 27. 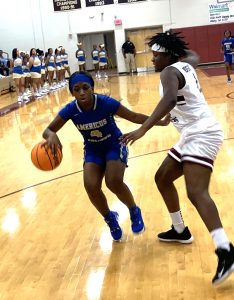 Americus-Sumter guard Trinity Jones tries to get by a DCHS defender. Jones led the Lady Panthers in scoring with 28 points against the Lady Trojans.
Photo by Ken Gustafson

The Lady Panthers took over the game early in the first quarter by using relentless defensive pressure against DCHS to force turnovers and disrupt the Lady Trojans’ offense.

“That was the whole key: to make them uncomfortable,” ASHS head coach Sherry Harris said. “We wanted to put some ball pressure on their ball handlers. They had a nice senior class of guards last year that left, so we just tried to make that a huge part of what we were trying to do defensively.”
ASHS jumped out to a 12-0 lead, capped off with a three-pointer by Jones, one of two that she hit in the first quarter. By the end of the quarter, the Lady Panther had a 15-4 lead. 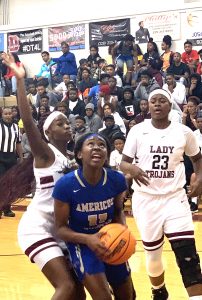 Americus-Sumter senior guard DeAsia Ford looks to go up and score on the inside. Ford scored seven points in the Lady Panthers’ win.
Photo by Ken Gustafson

The second quarter turned out to be much the same as ASHS continued to score at will. Reese scored eight of her 27 points in the second quarter to lead the Lady Panthers to a 33-9 halftime lead. Throughout the game, ASHS dominated on both ends of the court.

In the third quarter, ASHS used a full-court press to create more turnovers and points off turnovers. Jones scored 11 of her game-high 28 points in the third quarter to lead ASHS to a 58-20 lead before the final eight minutes began.

The Fourth quarter was more evenly matched as ASHS outscored the Lady Trojans 13-11, but by then, the damage had been done and the Lady Panthers finished off the game, winning it 72-31.
In addition to the offensive explosions of both Jones and Reese, DeAsia Ford chipped in seven points. Trinity Jackson scored six and Brianna Pope chipped in four in the winning cause.

With the loss, the Lady Trojans drop to 1-2 on the season and 1-1 in the Region 1-AAAA standings. 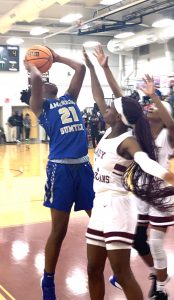