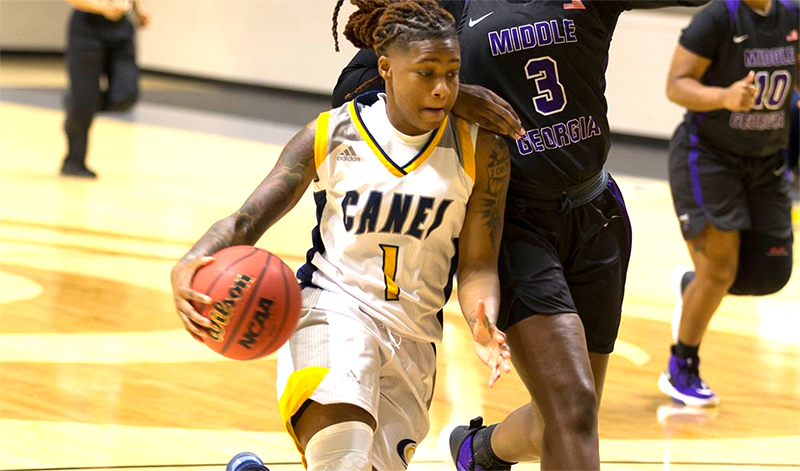 VALDOSTA, GA – The Georgia Southwestern State University women’s basketball team (GSW) went down to Valdosta the day after Thanksgiving looking to improve to 6-0 on the season. However, the Lady Hurricanes fell to Valdosta State 82-69 in overtime and lost to Eckerd College 81-66 in the VSU Thanksgiving Tournament, which was played Friday and Saturday, November 29-30.

With the two setbacks, GSW is now 4-2 on the season.

The 40-minute regulation period was not enough to decide this contest. Both teams were tied at 67-67 and the game would have to be decided in overtime. Unfortunately for the Lady Hurricanes, they were outs cored 15-2 in the extra period and lost 82-69 to the Lady Blazers.

It was a back-and-forth affair between both teams in the first quarter, but the Lady Hurricanes led 13-10 by the start of the second quarter. 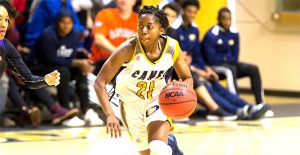 VSU’s Kayla Bonilla nailed a three-pointer to tie the game, but GSW’s Jamesha Samuel responded with a three-pointer of her own to give the Lady Hurricanes a 16-13 lead. Both teams fought back and forth for the remainder of the first half, but the Lady Blazers had a 26-25 lead at halftime.

Three minutes into the third quarter, the Lady Hurricanes tied the game at 32-32 on a three-pointer by Chatman. GSW then took a four-point lead on jump shots by Tamecia Blue and Madison Johnson. After the Lady Blazers tied the game with three minutes remaining in the third quarter, Chatman drained another shot from beyond the arc to reclaim the lead for the Lady Hurricanes. However, VSU responded when Abby Rouse knocked down a three-pointer. VSU would get a late layup near the end of the third quarter to give themselves a 46-45 lead going into the fourth.

The Lady Blazers took a five-point lead in the fourth quarter, but a deep three-pointer from Kya Cochran brought GSW to within two at 52-50. After a quick steal, Blue was fouled and made two free throws to give GSW a 60-59 lead. Both teams exchanged leads, but a late foul put the Blazers at the line where they drained two important free throws to push the game into overtime.

Bonilla scored 23 points and dished out seven assists to lead the Lady Blazers.

The Lady Hurricanes were hoping to bounce back on Saturday when they took on Eckerd College (EC) in the second game of the tournament. However, EC jumped out to a big lead in the first quarter and that proved to be the difference in the Lady Tritons’ 81-66 victory over GSW. By the end of the first quarter, EC had a 27-8 lead.

The Lady Hurricanes bounced back in the second quarter by scoring 25 points to cut their deficit to 10 points at 37-27. Thanks to baskets from Chatman and Blue, GSW was able to stay within striking distance, trailing 41-33 at the half.

EC opened the second half with a run and expanded their lead. The Lady Tritons took a 20-point lead, their largest lead of the game, with 2:58 remaining in the third quarter on a three-pointer by Ciara Granlund. At this point, EC led 62-42. Unfortunately for the Lady Hurricanes, they were not able to make a serious run to make a comeback and left Valdosta with an 81-66 loss to the Lady Tritons.

The Lady Hurricanes were led in scoring by Tamecia Blue with 17 points, including 10 free throws. Mariya Trimble came off the bench to score 13 points and grab four rebounds. Trimble also dished out three assists.

Up next for the Lady Hurricanes is a Peach Belt Conference matchup on Thursday, December 19, against Augusta University at the Storm Dome. Tip off is scheduled for 5:30 p.m.