Golden Rams hand Hurricanes their first loss of the season 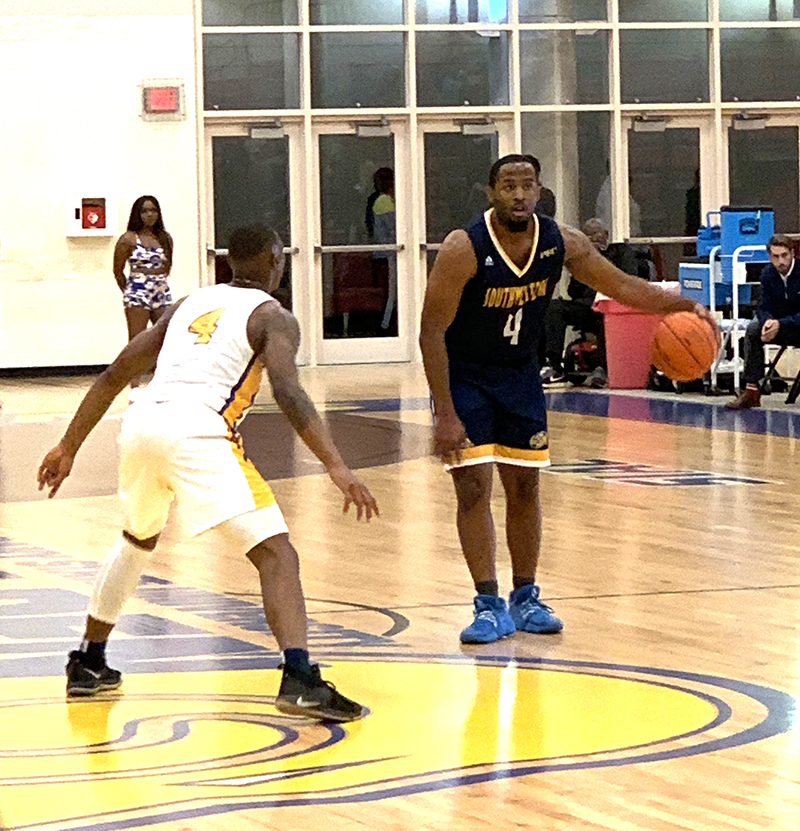 ALBANY, GA – Trailing by as much as 19 points in the second half, the Georgia Southwestern State University men’s basketball team (GSW) made a furious comeback to cut their deficit to three. However, the Golden Rams of Albany State University (ASU) held on to defeat GSW 72-66, thus handing the Hurricanes their first loss of the season (5-1).

The game was played on Thursday, December 5, at the Albany State West Campus arena. In the first meeting between these two teams in the Storm Dome on Monday, November 18, the Hurricanes came out on top 75-66.

Three Hurricanes scored in double figures. Soloman Thomas and Jalen Cameron each scored 18 points and Jamari Dean scored 16, but it was not enough.

The Hurricanes struggled shooting from the field for most of the game. After a tremendous performance from beyond the arc in the 89-62 win over Fort Valley State on Monday, December 2, GSW went four for 18 from behind the three-point line against the Golden Rams (22.2 percent).

The Hurricanes jumped out to a 10-5 lead to start the game, but the Golden Rams responded with eight unanswered points, capped off with a basket by Harris. This prompted a timeout by GSW head coach Aaron Coombs with 13:19 to go in the first half.

Out of the timeout, both teams traded baskets for the next four and a half minutes, with ASU leading 19-16. Over the next three minutes, ASU outscored the Hurricanes 5-2 until Thomas sank two free throws to bring GSW to within four at 24-20 with less than five minutes to go. However, the Golden Rams went on a 5-0 run to take a nine-point lead with 3:41 left to play in the half. 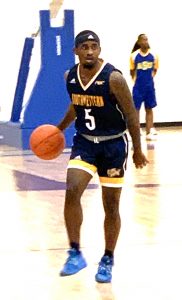 GSW guard Kahlon Whitley dished out three assists and had two steals in the Hurricanes’ loss at Albany State.
Photo by Ken Gustafson

The Hurricanes broke their scoring drought when Keshawn Gibbs hit two free throws to cut the Golden Rams’ lead to 29-22. Both teams struggled to score in the last minute of the half, but the Hurricanes would trail at halftime 33-24.

On the other hand, the Golden Rams shot 14 of 28 from the field in the first half (50 percent) and Harris led ASU with 12 first-half points.

ASU scored the first four points of the second half before Cameron sank two foul shots to cut the Golden Rams’ lead to 38-26.

However, ASU went on a 5-1 run to increase their lead to 43-27 with less than 18 minutes left in the game. Then ASU jumped out to its largest lead of the game when Jerome knocked down a three-pointer. At this point, the Hurricanes found themselves trailing 46-27.

As the second half continued, the Hurricanes continued to struggle scoring and with less than 13 minutes to go in the game, Jerome hit another three-pointer to give the Golden Rams a 51-33 lead. 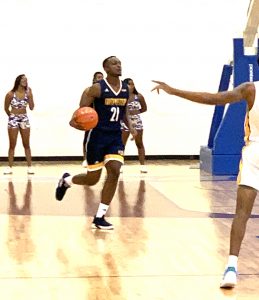 Then with 11:19 to go, a technical foul was called against GSW’s Devon Higgs. Burns made the two technical foul shots. Since a personal foul was also called, the Golden Rams were able to make two more free throws to increase their lead back to 17 at 54-37.

However, the Hurricanes were able to score some fast-break baskets to get themselves back in the game. By the 9:13 mark, they trailed ASU 57-46. Then Thomas pushed the ball up the floor, scored a basket and was fouled. He made the free throw to convert the three-point play, bringing the Hurricanes to within eight at 57-49. However, the Golden Rams responded by going on another run, capped off by a two-handed slam by Harris.

Over the next few minutes, however, the Hurricanes would go on a run that would cut their deficit to six at 65-59. After the Golden Rams scored a basket to push their lead up to eight, timeout was called with 4:30 left. The Hurricanes had exactly four and a half minutes to execute a come-from-behind victory and stay undefeated.

Out of the timeout, Cameron was fouled while going up for a layup and made both free throws, cutting GSW’s deficit to six at 67-61. Then the Hurricanes forced a turnover and Thomas was fouled. He made one of two free throws to cut the deficit to 67-64 with a little over three minutes to play.

Both teams traded baskets on their next possessions before timeout was called with 2:22 left. At that point, ASU had a 69-64 lead.

Out of the timeout, Josh Press got a steal for the Hurricanes and Jamari Dean hit a short baseline jumper to bring GSW to within three at 69-66. The Hurricanes had been down by as much as 19 in the second half and were now within a three-pointer of tying the game.

Up next for GSW is their first Peach Belt Conference game of the season. They will take a road trip to Augusta, GA to take on Augusta University on Thursday, December 19. Tip off is scheduled for 7:30 p.m.