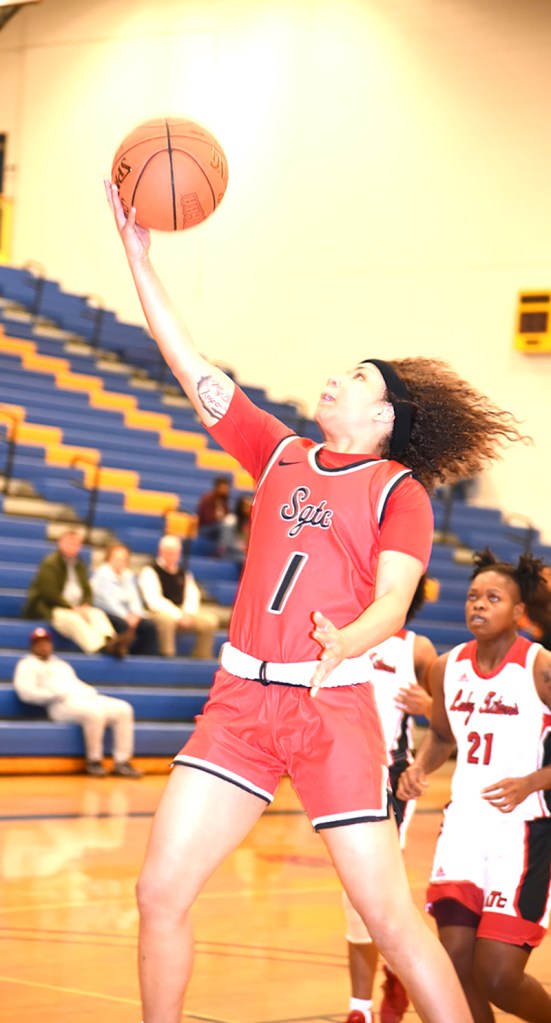 SGTC sophomore Shamari Tyson (1) is shown above driving in for a lay-up against Albany Tech. Photo by Su Ann Bird

ALBANY, GA – The South Georgia Technical College (SGTC) women’s basketball team won their eighth consecutive victory when they traveled to Albany and came away with a 73-61 victory over Georgia Collegiate Athletic Association (GCAA) opponent Albany Tech on Wednesday, December 4, on the campus of Albany State University.

The Lady Jets (10-1) are currently ranked #19 in the nation in the National Junior College Athletic Association (NJCAA) top 25 rankings and are undefeated in the GCAA at 5-0.

While SGTC head coach James Frey was glad that his squad won, he was not totally pleased with their performance. “We won, but I was not pleased with how we played,” Frey said. “We have several players who are out with injuries or just returning from injuries, but that should not be an excuse. When our players step on the court. I want them to give me 100 percent and we are not there yet. We have not played hard for 40 minutes yet and to accomplish our goals, that is what it will take.”

Against Albany Tech, the Lady Jets hit one out of every three field goal attempts and hit approximately 14 percent of their three point attempts. They were three of 13 in the first half from the three-point line and 0-9 in the second half. The Lady Jets started out slow from the free throw line, hitting six out of 11 attempts in the first half. However, they improved in the second half as they made eight of nine foul shots.

For the game, SGTC shot 70 percent from the foul line.

Freshman Femme Sikuzani came away with 15 points and nine rebounds and sophomore Amara Edeh posted a double-double with 11 points and 12 rebounds.

Up next for the Lady Jets is a road game in Swainsboro, GA against East Georgia State College on Saturday afternoon, December 7, at 1 p.m.