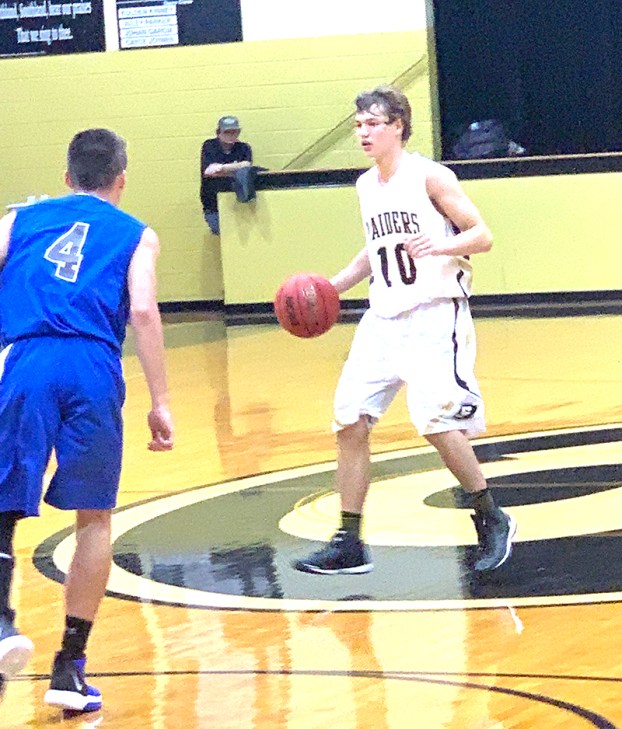 Southland Academy junior guard Max Foster scored 16 points to lead the Raiders to a 50-41 win over Terrell Academy in the Raiders' second game of the Brookwood Holiday Shootout in Thomasville, GA. ATR Archive

AMERICUS – Southland Academy (SA) junior guard Max Foster broke the school record for number of three-pointers made in a game in the Raiders’ 75-50 victory over Crisp Academy (CA) on Tuesday, December 10, at the Melvin Kinslow Gymnasium on the SA campus.

Foster led all scorers with 33 points, including a school record nine three-pointers.

With the win, the Raiders improve to 3-0 on the season.

SA head coach Rundy Foster was also pleased with the performances of Nathan Duke, Owen Exley and Hunter McCain. “Duke shot the ball well, was seven for seven from the free throw line and ran the offense well,” Foster said. “Hunter McCain and Owen Exley did a great job against some bigger post players.”

Both Duke and Exley scored in double figures. Duke scored 15 points and Exley poured in 14. McCain did not score, but according to Coach Foster, he had a solid game defensively on the inside.

The first quarter was a back-and-forth affair between both teams, with the Raiders owning a slight 18-16 lead at the quarter’s end. However, the Raiders outscored the Wildcats 18-4 in the second quarter to take a 36-20 lead into halftime. From that point on, SA was in total control of the game. The Raiders outscored CA in the third quarter 25-13 and went on to win 75-50.

Up next for the Raiders is the Brookwood Holiday Hoops Shootout Friday and Saturday, December 20-21, at the Brookwood School in Thomasville, GA.

The Raiders will play Westwood on Friday at 1 p.m. and will take on Terrell Academy on Saturday at 1:30 p.m.

Last Saturday’s result in the SEC Championship Game was not the result any of us Georgia fans wanted. The Dawgs... read more