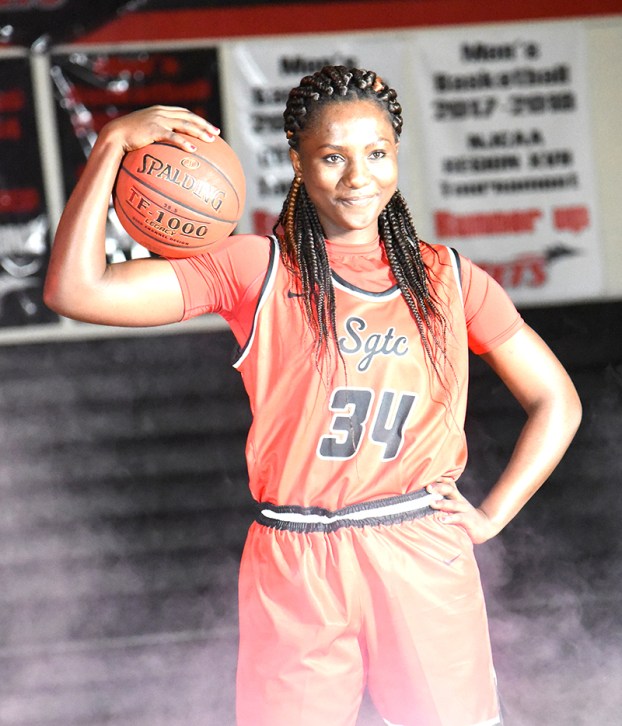 SGTC’s Femme Sikuzani, (34) 6’ 5” freshman center from Goma, Democratic Republic of the Congo, had a double-double night with 20 rebounds and 14 points against Chattahoochee Valley Community College. Photo by Su Ann Bird

“It was a tough game. I was thrilled to just get out of there with a win. CVCC are playing much better since getting Coach Robinson back and that is a VERY tough place to go win,” SGTC head coach James Frey said. “I think CVCC will definitely be in the thick of things again in that conference come tournament time. They play really fast and trap you all over the place. They want to make the game as wild as possible and when they start making shots like they did last night, they are tough to beat.”

The Lady Jets were able to post an 18-16 lead at the end of the first period and then outscored the Lady Pirates 15-14 in the second quarter to go into halftime with a 33-30 lead.

SGTC outscored the Lady Pirates 15-12 in the third quarter. Those three points ended up being the difference in the outcome. CVCC came back in the fourth period and tossed in 23 points, while holding the Lady Jets to only 20. In spite of that, the Lady Jets were still able to leave Phenix City with the 68-65 hard-fought victory.

“I was extremely proud of the way the girls fought through a tremendous amount of adversity. I think we grew up a lot last night,” Frey said. “We had four or five players that just refused to lose. We haven’t really been in a situation where we need it yet so that’s a mentality I wasn’t sure we would have. I was very glad to see it last night.”

Yasriyyah Wazeerud-Din scored 14 points and pulled down five rebounds. Wazeerud-Din also dished out three assists and had five steals on the night. Femme Sikuzani posted a double-double by scoring 14 points and grabbing 20 rebounds. She also had four blocked shots, one assist and a steal on the night. Flore Ngasamputu came off the bench and had 10 points for the Lady Jets.

From Staff Reports   AMERICUS – The undefeated Americus-Sumter Lady Panthers (ASHS) continued their dominance over their competition as they... read more