Raiders taste first defeat of the season against Edgewood 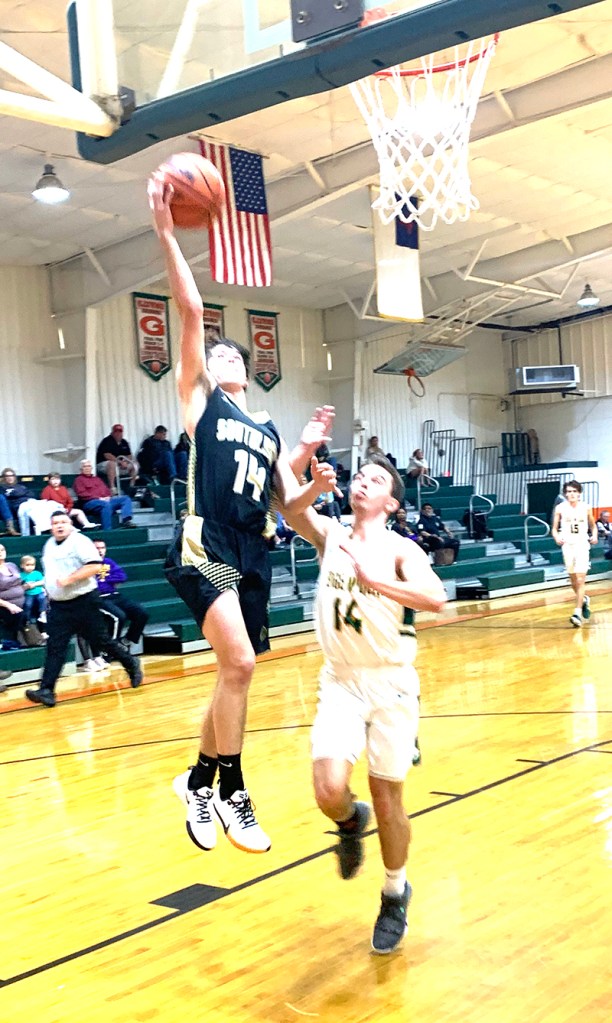 Southland Academy guard Nathan Duke scores on a layup at the end of the first quarter of the Raiders’ game against Edgewood. Photo by Ken Gustafson

PHENIX CITY, AL – With the Christmas break just ending, the Southland Academy Raider basketball team (SA) came to Phenix City, AL with the purpose of continuing their undefeated season as they took on Edgewood (ES) from Wetumpka, AL in the Border Wars Tournament on Friday, December 27, at the Glenwood School. However, the Wildcats made it difficult for SA by defending the perimeter and limiting the Raiders’ outside threat. AS a result, SA (5-1) tasted defeat for the first time this season in a 43-35 loss to the Wildcats (7-4).

The Border Wars Tournament is an annual tournament put on by the Glenwood School and it features mostly private school teams from Georgia and Alabama.

Owen Exley led the Raiders in scoring with 13 points and Max Foster scored nine. All of Foster’s points came from three three-pointers in the first half. 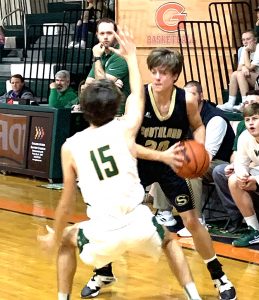 Southland Academy guard Owen Exley looks to drive to the basket. Exley led the Raiders with 13 points in their loss to Edgewood.
Photo by Ken Gustafson

During the first couple of minutes of the first quarter, the Raiders moved the ball around the perimeter very slowly as they tried to find holes in the Wildcats’ two-three zone defense. However, SA was unable to score for at least a minute until Luke Law hit a baseline jumper to give the Raiders their first points of the game.

ES would build their lead up to five points before Foster hit back-to-back three-pointers, cutting the Wildcats’ lead to 11-10. With ES leading 15-12, Nathan Duke got a steal and a basket to cut the deficit to one point as the first quarter ended.

However, the Wildcats went on an 8-2 run to start the second quarter, capped off with two free throws from Robert Stewart. The Raiders responded as Foster drilled another three-pointer to cut the Wildcats’ lead to 23-21 with less than two minutes to go in the half. Exley would later drill a three-pointer with 22 seconds left to give the Raiders the lead, but Austin Patrick was able to score on a short jumper to give ES a 25-24 lead at halftime.

Both teams struggled to score for much of the third quarter until Stewart nailed back-to-back three-pointers to give the Wildcats a 32-26 lead. That prompted SA head coach Rundy Foster to call a timeout with a little over a minute left. By the end of the third quarter, SA trailed 34-26.

During the first few minutes of the fourth quarter, the Raiders struggled to score. However, Exley was able to get a steal and a basket. Having been fouled on the play, he made the free throw to bring the Raiders to within two at 34-32. This was part of an 8-0 run that gave SA a 35-34 lead. 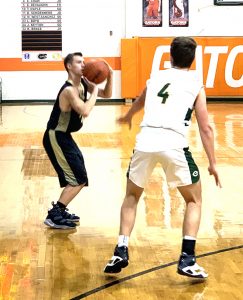 Southland Academy guard Max Foster is about to shoot a three-pointer. Foster hit three shots from behind the arc in the loss to Edgewood.
Photo by Ken Gustafson

However, Stewart answered with another three-pointer to put the Wildcats back in front with less than three minutes to play. That was followed by both a personal and a technical foul against the Raiders. Stewart made three out of the four free throws to put ES up 40-35. The technical foul against SA would prove to be a crucial turning point in the game.

With 1:43 to go, the Wildcats maintained possession, but turned it over. This gave the Raiders a chance to cut into their deficit. Exley had a chance to bring SA to within three, but missed two free throws. At the other end, Stewart was fouled and made both of his free throws to secure the win for the Wildcats.

Stewart led all scorers in the contest with 23 points.

The Raiders will try to bounce back from their first loss of the season when they take on Lee-Scott Academy (AL) in their second game of the tournament on Saturday, December 28, at 1:30 p.m. EST.