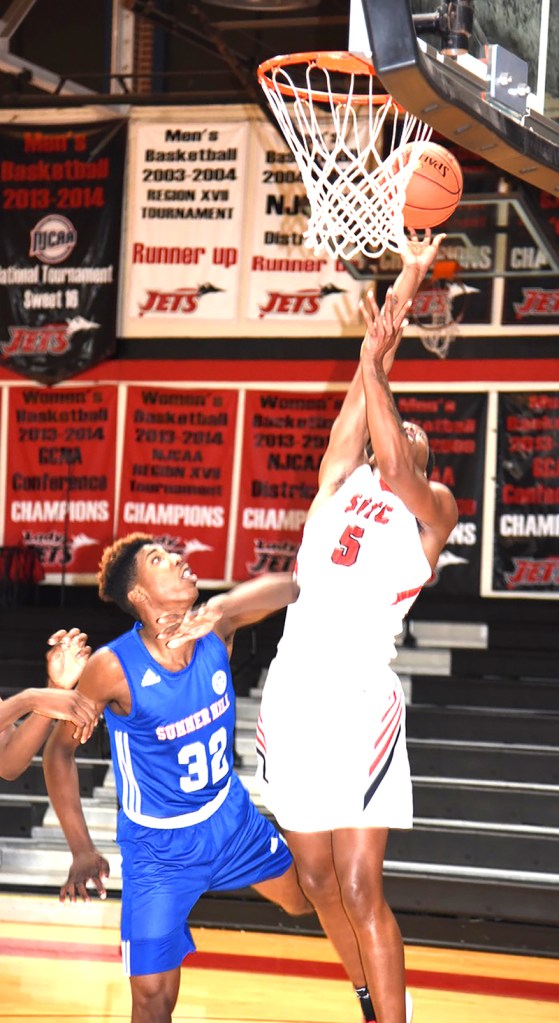 AMERICUS – The opening day action of the South Georgia Technical College (SGTC) Jets Holiday Classic was not kind to the home team. The Jets faced Summer Hill Prep (SHP) in the last game on the opening day of the tournament and suffered an 85-71 loss to the Blue Devils.

SGTC struggled in the first half and that ended up costing them the win. The Jets overcame a slight deficit in the game and actually pulled ahead by five points with 12-minutes left in the half. However, a strong run by SHP resulted in a 19-point swing that allowed the Blue Devils to take a comfortable 35-21 lead at the half. 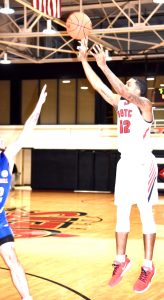 SGTC Freshman Austin Hadden (12) was four of six from the three-point line in the second half for the Jets against Summer Hill Prep to lead the team in scoring with 23 points.
Photo by Su Ann Bird

Freshman guard Austin Hadden ended up leading the Jets in scoring with 23 points. Hadden scored all of his points in the second half. He led the team in three-point shooting as well, hitting four of eight attempts. Hadden was four of six in the second half. He also hit three of four foul shots and scored another eight points from the field. In addition to scoring, Hadden also pulled down six rebounds.

The only other Jet in double-figures was sophomore guard Justin Johnson with 20 points. Johnson led the team in scoring at the end of the first half with seven points and was the leading rebounder for the team with nine. Freshman Denari Garrett added nine points for the Jets and freshman Lamont Sanders came up with seven points.

With the loss, the Jets fall to 6-7 on the season. They will look to get back to the .500 mark in the second day action when they face Middle Georgia Prep on Sunday, December 29, at 2 p.m. After the men’s tournament ends, the Lady Jets will host two nationally ranked women’s team on Sunday, Monday, and Tuesday in the Lady Jets Holiday Classic.