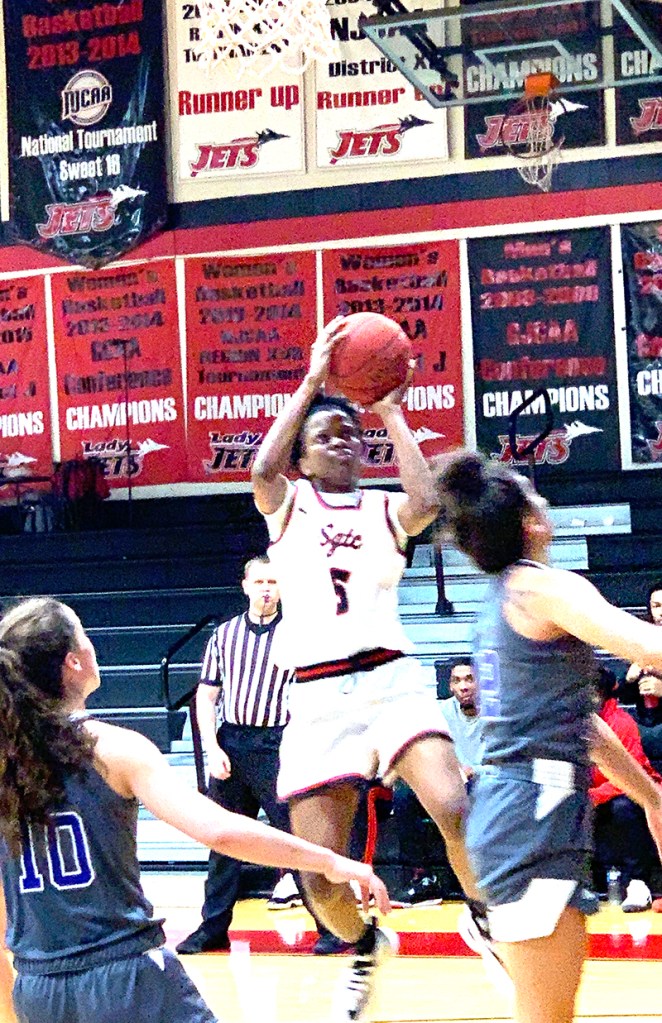 SGTC sophomore forward Amara Edeh scored 15 points, including a crucial basket with under a minute left, to lead the 16th ranked Lady Jets to a 73-66 victory over East Florida College. Photo by Ken Gustafson

AMERICUS – It was the type of game one would expect between two nationally ranked college basketball teams. It was an exciting, hard-fought game that went down to the last few seconds. Fortunately for the #16 ranked South Georgia Technical College Lady Jets, they were able to outlast 25th ranked East Florida College (EFC) by the score of 73-66 in SGTC’s first game of the Lady Jets Holiday Classic on Sunday evening, December 29, at the Hangar on the SGTC campus.

“I’m excited to get a victory over a top 25 program. I have a lot of respect for Coach (MJ) Baker and her team,” SGTC head coach James Frey said. “They always play extremely hard. They always shoot the ball super well. I’m just excited to get a good win over a quality program.”

During the second half, the Lady jets struggled with turnovers as the Lady Titans used their defensive pressure to create steals, but SGTC sophomore power forward Amara Edeh scored a crucial basket with 57.3 seconds left in the game to help seal the victory for the Lady Jets.

The first quarter was a back-and-forth affair between both teams, but EFC had taken a 19-16 lead with a little over two minutes left. For the next minute and a half, both teams traded baskets, but with 24 seconds left in the first quarter, SGTC freshman center Hope Butera sank two free throws to tie the game up at 21-21 to begin the second quarter. 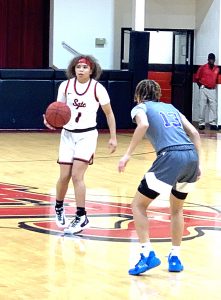 With less than six minutes to play in the first half, the Lady Jets were leading 24-23 before SGTC freshman point guard Moe Shida nailed a three-pointer to extend the SGTC lead to four. However, a couple of minutes later, EFC scored four straight points, including a three-pointer by Milan Schimmel, to tie the game a t 27-27. Tyson responded with a three-pointer of her own to put the Lady Jets back up by three with a little over two minutes left before halftime. This began a 10-0 run by the Lady Jets, which was capped off by another three-pointer from Tyson. As a result, SGTC went into halftime with a 39-31 lead.

The Lady Jets came out cold to begin the second half and struggled to score. This allowed the Lady Titans to go on a 9-3 run to cut SGTC’s lead to 42-40. However, Wazeerud-Din scored on a layup and then nailed a three-po9nter to push the Lady Jets’ lead back up to seven at 47-40.

As was expected from a nationally ranked junior college team, EFC responded. The Lady Titans went on a 7-2 run, capped off by a three-pointer from Jacquelyn Levay. Skye Williams would then sink two free throws to tie the ball game at 49-49. In a matter of moments, the Lady Jets’ lead had totally evaporated.

With less then a minute to go in the third quarter, EFC was able to take a 52-51 lead. At the end of the quarter, Frey challenged his team to show more toughness on the court. SGTC would have 10 more minutes to do just that and try to get a win against a quality EFC team.

With a little over seven minutes left in the game, Edeh hit a tough baseline jumper to give the Lady Jets a 57-54 lead. Levay responded with a three-pointer for EFC, but the Lady Jets responded with four straight points, including a basket from Edeh on the dribble drive. With 4:21 remaining, Wazeerud-Din hit one of two foul shots to give SGTC a 64-59 lead. However, Levay struck again with another three-pointer to bring the Lady Titans to within two. This prompted Frey to call a timeout with 3:15 remaining to rally his team.

With 2:26 remaining, Williams drew a foul and was able to make two free throws to tie the game at 64-64, but Edeh responded in kind by knocking down two foul shots of her own to give SGTC a two-point lead. This game was looking like a game that would be decided by the team that was going to have the last possession of the game.

Then with 57.3 second left, Edeh took the in-bounds pass and scored. Having been fouled on the play, she sank the free throw, giving the Lady Jets a 69-64 lead. SGTC was able to get stops on the Lady Titans’ next two possessions and convert at the other end via free throws. With 21.9 seconds left, the Lady Jets had a 72-66 lead and were within sight of a very hard-fought victory.

With 20 seconds left, EFC had the ball, but SGTC was able to get a steal and Tyson was fouled. Tyson made one of two foul shots to salt away the 73-66 victory.

The Lady titans were led in scoring by Stephanie Torres’s 18 points and Levay’s 17. Williams was also in double figures with 14 points.

Up next for the Lady Jets is their second game of the Lady jets Holiday Classic on Monday, December 30, at 6 p.m. against Cape Fear Community College. They will then play Shelton State in their final game of the tournament on Tuesday, December 31, at 4 p.m.