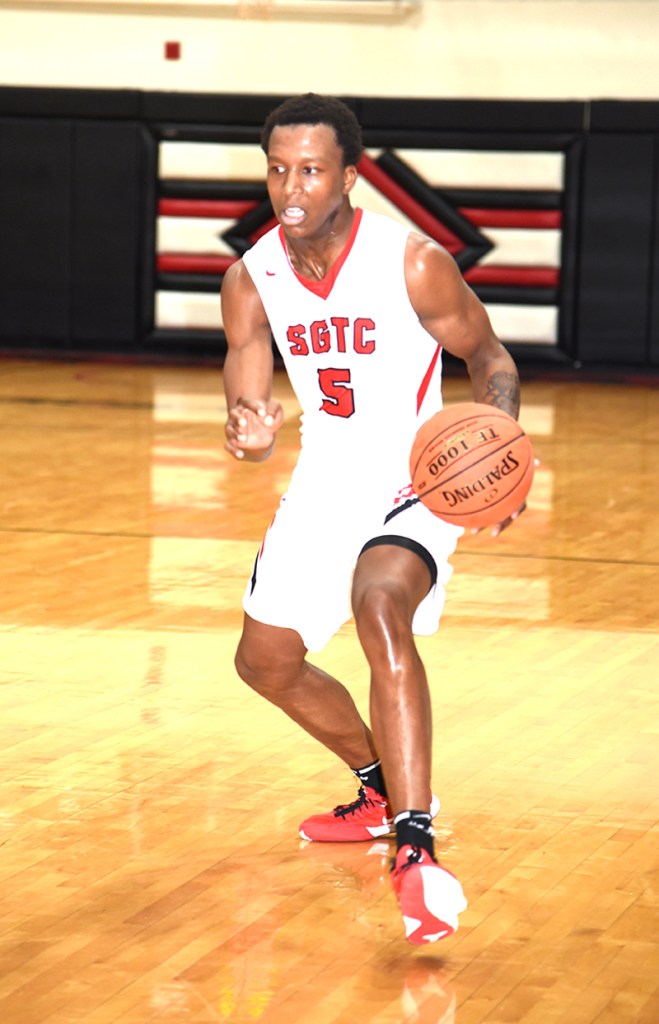 SGTC sophomore guard Justin Johnson (5) took the ball the length of the court and scored the game-winning layup to lift the Jets to a 73 -72 come-from- behind win over Middle Georgia Prep in the Jets Holiday Classic Tournament. Photo by Su Ann Bird

MGP was coming off an 87-83 loss to Shelton State on the opening day of the tournament.

The SGTC Jets were down 38-34 at the end of the first half and fell behind by as many as 14 points in the second half. In fact, the only time the Jets led was at the final buzzer, when Johnson’s last-second basket gave them the one-point victory.

Johnson and sophomore guard Jarius Carroll led the Jets in scoring with 15 points each. Johnson posted a double double on the night with 15 points and 10 rebounds, while Carol added three rebounds, one assist and three steals.

In addition to the performances by Johnson and Carol, another SGTC sophomore, Brice Paster, contributed 10 points, four rebounds and three assists. Lamont Sanders came away with nine points, Jalen Reynolds had eight and Denari Garrett scored seven points on the night. Austin Hadden closed out the scoring with six points. Reynolds also pulled down eight rebounds for the Jets.

The win puts SGTC back at .500 on the season with a 7-7 overall record. They will travel to Swainsboro, GA on Thursday, January 2, to face East Georgia State College in their first conference game of the season before returning home to host Central Georgia Technical College in a conference doubleheader with the Lady Jets. The Lady Jets open at 1 p.m. on Saturday and the Jets follow with a 3 p.m. game.