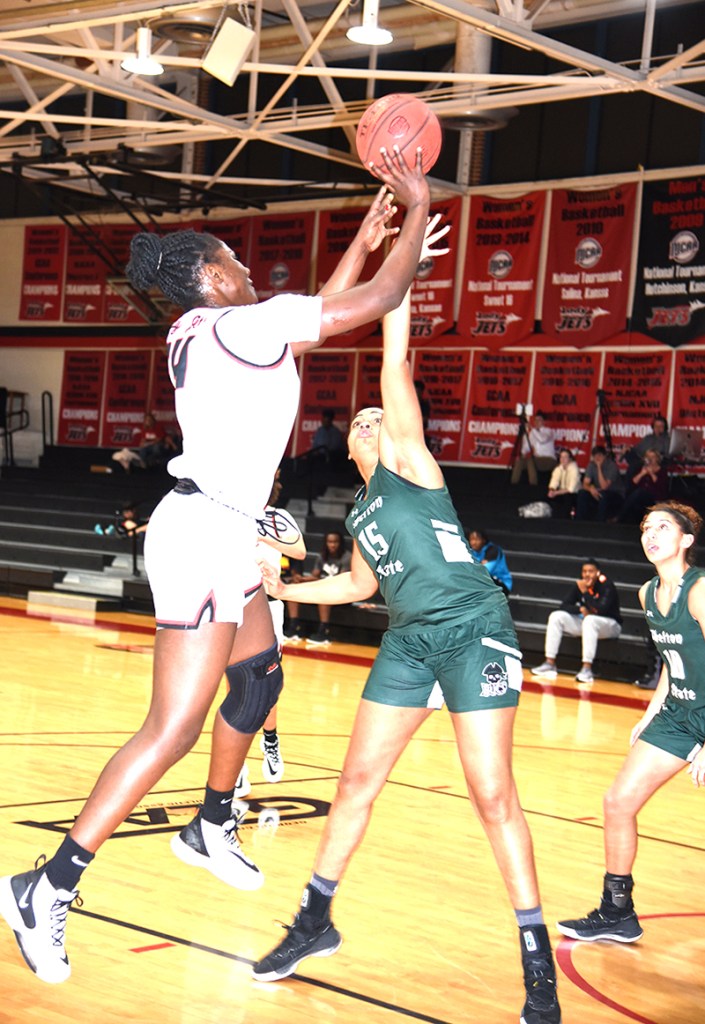 AMERICUS – The 16th ranked South Georgia Technical College women’s basketball team (SGTC) tried to improve their winning streak to 15 games when they took on 11th ranked Shelton State College (SST) on Tuesday, December 31, in their final game in the Lady Jets Holiday Classic. However, the Lady Buccaneers were able to prevail 68-63 in a hard-fought contest and ended the Lady Jets’ 14-game winning streak.

SGTC sophomore guard Niya Goudelock turned 20-years old on New Year’s Eve and her birthday wish was for the Lady Jets to pull off the upset. Despite trailing SST for the entire game, it looked like the Lady Jets’ luck might be changing as they pulled ahead 58-57 with 2:54 remaining in the game. It was a back-and-forth affair between both teams during the closing minutes, but the Lady Buccaneers would come out on top.

“We did not shoot the ball well and we made a lot of mental mistakes, but the bottom line was we were still in the game almost until the final buzzer,” SGTC head coach James Frey said. “We hit 28 percent of our shots in the first half and were only shooting 12.5 percent from the three-point line in the first half. You cannot beat good teams if you can’t score.”

Despite that low point conversion in the first half, the Lady Jets were only down 31-24 at halftime. SGTC fell behind by as many as 10 points in the first half. In the second half, the Lady Jets’ point production went up significantly. SGTC hit 46.9 percent of their shots from the field and 27.3 percent from the three-point line. They also made six of seven free-throw attempts.

The Lady Jets (16-2) outscored SST in the third and fourth quarters, but it was not enough to give Goudelock and her teammates the win over the higher-seeded Lady Buccaneers.

“I was proud of the fact that we never gave up,” Frey said. “Shelton State knows that we can play with them and that we could be a force to contend with later in the season. This was good competition for our team and if we reach our goals this season, we are going to have to find a way to win these tight games against top-ranked teams.” 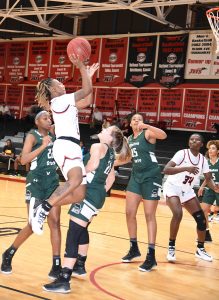 Niya Goudelock (3) wound up with 11 points on her 20th birthday in the Lady Jets’ narrow loss to Shelton State.
Photo by Su Ann Bird

SGTC freshman center Femme Sikuzani used her 6’ 5” height to lead the Lady Jets in scoring and rebounding with 19 points and nine rebounds. Sophomore forward Yasriyyah Wazeerud-Din was the second leading scorer with 13 points and Goudelock came up with 11 on her birthday.

A total of seven women’s basketball teams and six men’s teams traveled to Americus to participate in the five-days of basketball action on the South Georgia Technical College campus during the Jets and the Lady Jets Holiday Classic.

The Lady Jets are still in first place in the Georgia Collegiate Athletic Association (GCAA) with an undefeated record at 6-0.