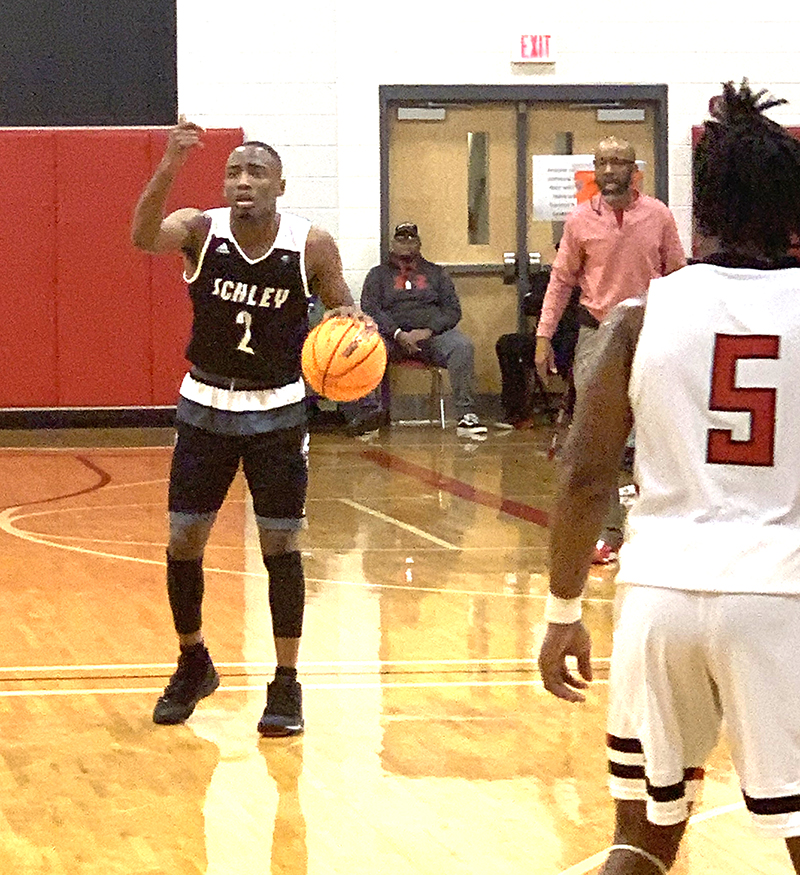 BUENA VISTA, GA – Trailing Marion County (MC) by as many as 11 points n the third quarter, the Schley County High School boys’ basketball team (SCHS) stormed back in the fourth quarter and sent the game into overtime. However, MC senior guard Brandon Thomas scored two crucial baskets during the overtime session to help the Eagles hand the Wildcats a 67-62 loss in overtime on Friday, January 3, at Marion County High School.

Though there were some questionable calls that went against SCHS in this game, head coach Ernest Scott was not about to lay the blame on the officials.

“In the second half, we got back in the ball game and made it a ball game,” Scott said. “There were some questionable calls, but that’s expected when you come here. We have to play through that. We had a chance at the end of regulation. All we had to do was make free throws. I mean, we’re up. We went to the line three times and out of those six free throws, we made two. So, I mean, we can look at the calls, but at the same time, we had a chance to close it out. We can’t use that as an excuse.”

Things did not start out well for the Wildcats as the Eagles jumped out to a 7-1 lead to start the game. Cross was able restore order by hitting a three pointer, but MC responded with another run to expand their lead to 17-6. 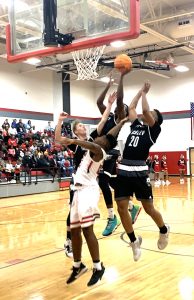 SCHS junior power forward Brandon Williams (hand on ball) and senior power forward Matthew Burwell (20) both go up for a rebound against Marion County. Williams had seven points on the night and Burwell had three.
Photo by Ken Gustafson

Later on in the first half, the Wildcats were able to cut their deficit to seven at 27-20 on a three-pointer by Taylor, but MC senior guard Markevious Kelley responded with a three-pointer of his own to give the Eagles a 30-20 halftime lead.

In the latter part of the third quarter, the Wildcats struggled with the defensive pressure from MC. The Eagles were able to force turnovers and score points off of those turnovers to increase their lead to 42-31 before Scott called a timeout.

That timeout seemed to help the Wildcats regroup. They were able to go on a 10-2 run, which was capped off by a three-pointer from Taylor.

For much of the fourth quarter, it was a back-and-forth affair between both teams. However, the Wildcats cut their deficit to 53-51 on a three-pointer by sophomore guard Trypp Lumpkin with a little over three minutes to play. Brandon Williams had a chance to tie the game with 3:11 left, but made only one of his two foul shots. Nevertheless, the Wildcats only trailed 53-52 with plenty of time remaining. 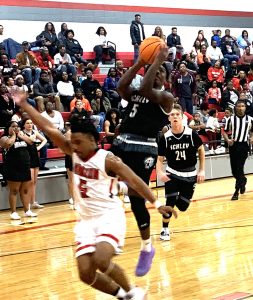 With 2:35 to go, Cross was fouled by MC’s Jessie Davis and made both free throws to give the Wildcats their first lead of the game. Thomas had a chance to give the lead back to the Eagles, but missed the layup as he drove to the basket. The Eagles were able to get the rebound off the missed shot and called timeout with 2:02 to go. At this point, the Wildcats had a 54-53 lead.

For the next minute, the Eagles had the ball with an opportunity to increase their lead. They were able to get the ball into Tyleak Broadway, but his shot was off the mark and was rebounded by the Wildcats. With 1:04 to go, Scott called a timeout to set up his team’s offense.

Out of the timeout, Ross was fouled and went to the line to shoot one-and-one, but missed the front end. The Eagles responded when Thomas drove to the basket and scored to give MC a 55-54 lead. On the Wildcats’ next possession, Ross was fouled again and made one of two foul shots to tie the game. At that point, MC called a timeout with 25.4 seconds left to set up a potential game-winning shot.

Kelley dribbled the ball for almost the entire 25 seconds before hoisting up an air ball at the buzzer. The game would have to be decided in overtime.

Cross scored on a drive to the basket to begin the overtime session. The Eagles countered with a tying basket and then took the lead on a three-pointer by Kelley with about two and a half minutes to play. Taylor tried to tie the game on a three-point attempt, but missed. Thomas then responded by driving to the basket and scoring to increase the MC lead.

The Wildcats were not able to score on their next possession, and Thomas was able to score again to give MC a 65-60 lead with 1:02 to go.

The Wildcats tried to get a basket on their next possession, but turned the ball over. Thomas then capitalized on the turnover by scoring and insurance basket to seal the overtime win for the Eagles.

Thomas led all scorers with 28 points and Kelley poured in 25.

The Wildcats will try to bounce back from this setback when they host Crawford County in another Region 4-A contest on Tuesday, January 7. Tip off for that game is scheduled for 7:30 p.m.