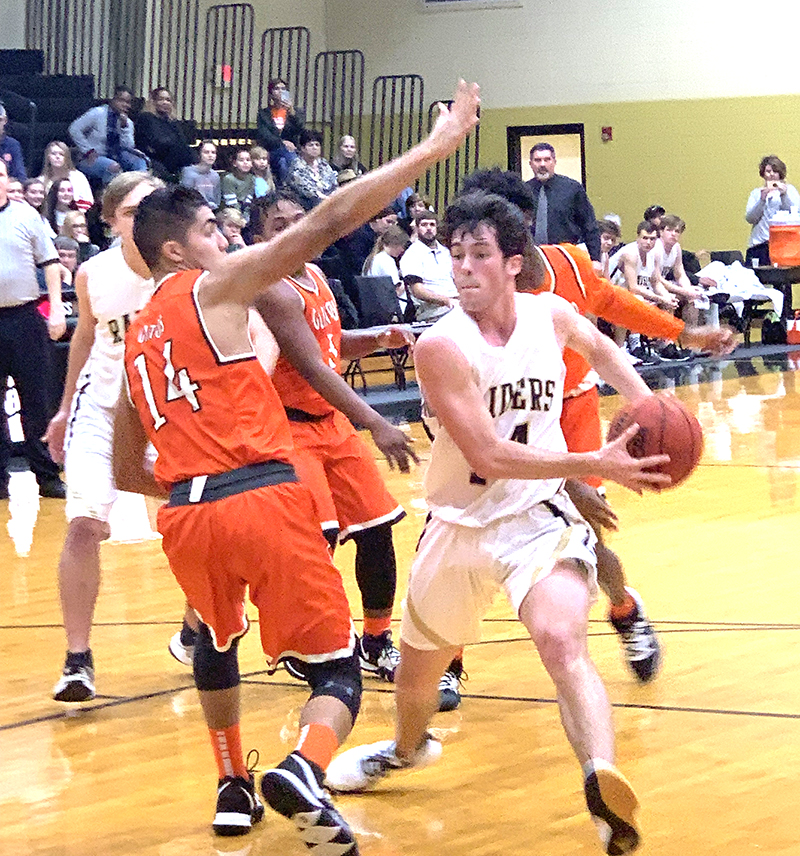 Southland Academy guard Nathan Duke drives to the basket against Glenwood (AL). Duke scored 13 points in the win over the Gators. Photo by Ken Gustafson

AMERICUS – Thanks to some clutch free-throw shooting by Max Foster and Nathan Duke down the stretch, along with increased defensive intensity in the second half, the Southland Academy Raider basketball team (SA) was able to come away with a hard-fought 53-50 victory over the Glenwood School (GS) from Phenix City, AL on Saturday, January 4, at Southland Academy.

According to SA head coach Rundy Foster, a big factor that contributed to the Raiders’ win was their defensive play in the third quarter.

“I though defensively, in the third quarter, we played excellent. We held them to eight points,” Foster said. “Coming out of halftime, I challenged them a little bit in the locker room that they have to have more sense of an urgency on the defensive end and I thought they did a good job in that third quarter.”

With the win, the Raiders improve their overall record to 7-2. They are currently on a two-game winning streak, having defeated Westfield 54-47 on Friday, January 3, in Perry, GA.

The first quarter was fairly evenly matched between both teams, but the Raiders found themselves trailing 15-10 by the quarter’s end, thanks mainly to two three-pointers made by GS point guard Bryce Rosier.

Out of the timeout, the Raiders were able to generate some steals on defense. Exley stole the ball and went coast to coast for a layup. That was followed by a steal from Duke, who was fouled while shooting. However, Duke missed both free throws, which would have cut SA’s deficit to five. Instead, Eli Devaughn nailed a three-pointer to put GS up 27-17 with a little over two minutes left in the half. 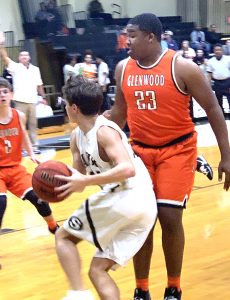 Southland Academy guard Owen Exley tries to score on the inside. Exley led the Raiders in scoring with 15 points.
Photo by Ken Gustafson

Both teams came out on fire to start the second half, but Foster and Smith both hit three-pointers to pull the Raiders to within two at 30-28. Then with a little over five minutes left in the third quarter, Hunter McCain grabbed an offensive rebound and scored to put SA in front 31-30.

For the next three and a half minutes, there was very little scoring between both teams, but Max Foster was able to put SA in front 38-35 on a three-pointer.

In the first minute of the fourth quarter, Foster struck again with another three-pointer to put the Raiders up 41-35. However, the Gators responded with four unanswered points to pull within two. Then with 5:42 to go, the Gators tied the game when Rosier was fouled and made both free throws.

On their next possession, the Raiders moved the ball around the perimeter very slowly and patiently, looking for the best shot. Then with 4:49 to go, a technical foul was called against the Gators. Unfortunately for SA, Foster was unable to make the technical foul shots.

As a result of the technical foul, the Raiders maintained possession and Duke was fouled. He made both free throws to give SA the lead, but the Gators responded again as Rosier knocked down another three-pointer.

Both teams traded baskets over the next minute and the game was tied at 47-47 with less then two minutes left.

With 1:30 to go, Foster called a timeout to set up his team’s offense. It appeared the game was going to go down to the wire. The team who would come out on top would be the one that made the fewest mistakes and made free throws.

With a little over a minute left, the Raiders had the ball and were moving it patiently on offense. They found Exley on the inside, who promptly scored to give SA a 49-47 lead. The Raiders were able to get a stop at the other end and Duke was fouled. Duke sank both free throws to increase SA’s lead to 51-47.

Once again, SA was able to stop GS from scoring and got a defensive rebound. Max Foster was fouled with just a few seconds left and made both free throws to salt away the victory. GS power forward Kody Bence hit a three-pointer at the buzzer, but by then, the outcome had already been decided.

The Raiders’ hard-fought victory over GS came on the heels of their 54-47 victory over Westfield the night before. In that game, Duke scored 16 points to lead the Raiders’ attack and Hunter McCain poured in 10. According to Coach Foster, the win over the Hornets was a good win for his club, considering the fact that they had time off for the holidays. “We just need to keep improving and becoming more consistent,” Foster said. “I am pleased with our progress.”

The Raiders will now turn their attention to the start of GISA Region 3-AAA competition when they host Valwood (1-5) on Tuesday, January 7, at 7:45 p.m.