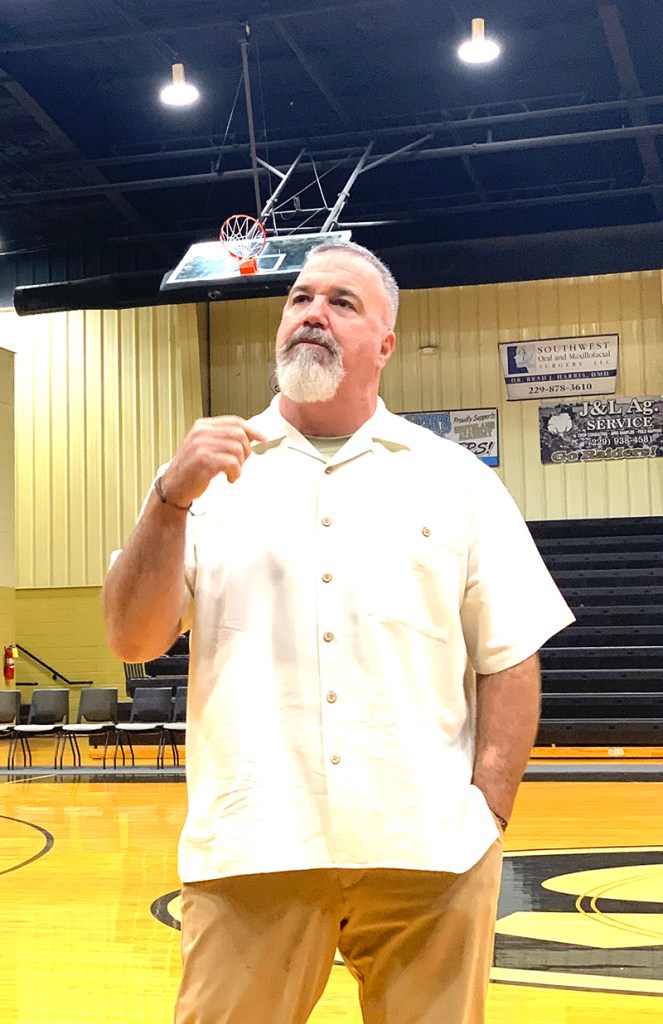 AMERICUS – On Tuesday, January 7, several Southland Academy students got to hear a message of hope, encouragement and love from Kevin “Chappy” Hines; the former chaplain for the University of Georgia Football Team under former UGA Head Football Coach Mark Richt.

This was a time for the students at Southland Academy to hear a message of encouragement, hope and love from a man who spent 15 years giving that same message to numerous UGA football players and other young people whose lives were impacted in a tremendous way.

Hines, 54, is currently a police officer in Watkinsville, GA, but works part-time with the Fellowship of Christian Athletes (FCA).

A former marine, Hines told the students that when he talks to groups of high school kids, he could see his daughter sitting up in the stands with them. “I just want to share with you like I’m sharing with my own children,” Hines told the students. “If one person in hear pays attention and grasps some truth and begins to realize that ‘Wow! Life is but a vapor’ and ‘Yeah, I’m really not happy about where I’m at right now’ or ‘Really, this guy right here is 54 and he really doesn’t understand everything and he sure doesn’t like everything that goes on in the world, but yet he continues to press on.’ I’m here to encourage you.”

Hines went on to describe his upbringing, such as the fact that his mother left him and his father when he was 12. “It was so devastating,” Hines said. “We want to talk about problems in the world and prayer in school and all that. It’s the breakdown of the family. I guarantee, that’s the number one issue and there maybe some of you in here that have dealt with it or are dealing with it right now and my heart goes out with you.”

Hines went on to tell his story about how he grew up playing basketball and soccer in high school in Greenville, New York and the fact that his father hugged him and his brother every day and told them that he loved them.

“It was so cool that, like, I was scared of my Dad. We were scared of our Dad and yet we didn’t want to hurt him because we loved him so much and he loved us and we didn’t want to hurt that relationship.” Hines went on to explain a situation in which his friends wanted to have a “keg party” with he and his brother at their house while their father was out of town, but that both he and his brother decided to not do it because they didn’t want to ruin their relationship with their father.

“The reason I’m here this morning is because you really are loved,” Hines told the students. “You really are cared about by this community and by this school.” Hines continued by telling the students that the teachers and coaches at the school love them.

Hines went on to describe his time in the Marine Corps and what he did once he got out. He then told the group about the time that he was reunited with his mother when his grandmother died in August of 1989. “We were walking down the street and my mother is a little 5’2 Italian lady. She grabs my hands and she looks up at me and she says ‘Kevin, I am so sorry that I left your Dad and your brother. I’ve regretted it every day of my life’. She says, ‘and let me say something. I have loved you since I carried you in my womb.’ I’m 23 years old and I just heard my Mommy tell me she loves me and that she’s sorry,” Hines said.

Hines went on to say that in September of 1989, he went to live with his mother in Tallahassee, FL, but that he continued to drink alcohol and smoke marijuana, which is what he had been doing once he retired from the Marine Corps.

However, Hines was invited by a friend to attend church at the University Heights Baptist Church in Tallahassee. “I get in there and I hear the gospel,” Hines said. “And I hear that God loves me and that He sent his son, Jesus Christ, to die for me and that I’m a sinner and that my life’s a wreck and that He hung on a tree that I may live.” After attending church there for a couple of weeks, Hines went to the pastor on Monday, October 16, 1989, and told him that he wanted to accept Christ is his savior.

Once he had surrendered his life to Christ, Hines said that his life radically turned around. “My life turned. I mean, it just racially turned,” Hines said. “I quit drinking. I quit smoking weed. It was hard to quit kissing girls, but that came down the road a little bit.”

Hines went on to describe his time as a police officer in Winterhaven, FL and as a truck driver before he met his wife, whose brother is former UGA Head Football Coach Mark Richt. Hines had enrolled at Florida Baptist Theological Seminary, but Coach Richt had invited him to become Chaplain of the UGA Football Team, which he did for 15 years. “It was an incredible 15 years,” Hines said. “I don’t want to do it anymore, but it was an incredible 15 years.” Hines went on to say that he loved those players and he loved ministering to them.

With that, Hines told the Southland students that everybody is telling these football players how good they are. “Sports is so out of wack in our country. It’s so out of wack,”Hines said. “There’s no one good! None! When they got to Georgia, I got to tell them ‘you’re no good!” Hines went on to explain that the Bible teaches that no human being is righteous before God and that all of humanity is in need of a savior.

He also stated that he was so impressed with Southland in the fact that there are no locks on the lockers. “You don’t know how blessed you are,” Hines told the students.

After Coach Richt got fired in 2015, Hines decided not to join Richt in Miami, but to stay in the Athens area with FCA, where he works part-time. He is currently a police officer in Watkinsville, GA. “I just want to serve my community,” Hines said. “I want to help these young men learn how to deal with society. I want to help them learn how to deal with people because I think God has allowed me to be able to do that. I just really have the ability to connect with people.”

Finally, Hines stressed to the Southland students the importance of having forgiveness and being willing to forgive. “When Christ hung on a tree, He did it to forgive our sins because we’re all sinners,” Hines said. “If I never forgave my Mom, I would have never been here standing here in front of you. I would have been a bitter dude. I would have been a hard guy.” He went on to stress to the students that they can be forgiven of their sins if they place their faith and trust in Jesus.

In closing, Hines stressed to the students that they need to be thankful for their school and the community that loves them and the importance of having joy at all times. “Joy is the deep settled confidence that God is in control of every detail in my life,” Hines said. “I believe that God is sovereign and he is good and I’m trusting in Him. I’m walking by faith, not by sight, believing that My God rules and reigns supreme.” Hines continued to stress to the students the importance of relying on God for every important decision in their lives.

Hines’ final word to the students was to be thankful for everything that they have in life, including their school and the community that they live in.